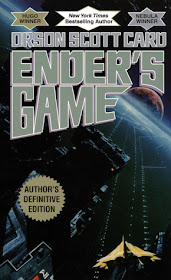 I read this story quite a while back with no special expectations. Like most books I read it just happened to be lying around the house.

I read it, was hugely entertained, and went on to read three or four of the sequels.

I've heard since all manner of 'stuff' about the author but what's true and what isn't I don't know and I'm not here to critique the man behind the keyboard. All I can do is report on the contents of the book and those I can thoroughly recommend you check out.

The main character, Ender Wiggin, through whose eyes we see the story unfold, is a child genius. If you're one of those people who wants your protagonist to be an average member of society, typical of his/her age and gender... step away. Ender's story is told because he is very far from ordinary.

OSC employs a bunch of fairly standard story-telling tricks. Our hero is underestimated at every turn, he exceeds expectations, we know he's got it in him and we're frustrated by the stoopid people who just won't see it. There's a bully/nemisis and nobody else but us sees just how nasty he is... However, OSC manages to bake an irresistable cake using those standard ingredients and once he starts sprinkling on originality as well, you've just got to eat it all.

This is sci-fi, not hard sci-fi, not soft sci-fi... let's say 'chewy'. It has a slightly old school EE Doc Smith feel to it, and you expect someone to pull out a monkey-wrench whenever the computer starts smoking, but none of that worried me.

This is actually a book with good messages (for the time) about equality, and one which poses interesting philosophical questions about what happens with races with orthogonal thought processes come into contact, and how far one can or should go in such situations.

There definitely is some characterisation going on. We're not talking Asimov's Foundation here where brilliant ideas invite you to forgive cardboard characters. The people here are decently drawn and Ender has his own angst (involving genius psychopathic siblings) that is quite engaging. However, it's the stuff that goes on that drives the story. The war games in preparation for battling the aliens, the unfortunately named 'Buggers'. These war games and Ender's brilliance in overcoming increasingly dire odds are a major theme and I loved them.

And then there's the twist. I'll say no more on that except that I was too engaged with the story to see it coming, and when it hit me ... well, I'd give the book 6* just for that moment. It doesn't work for everyone but it did for me!

EDIT: I have now seen the film - which I enjoyed. The film skips a lot that's important to the book, but I found it entertaining.

(scroll down the article)
http://www.hatrack.com/osc/reviews/everything/2014-09-11.shtml