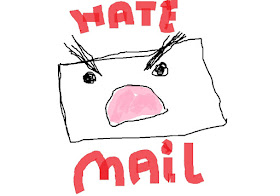 I realise that because there are a LOT of very stupid people out there that this blog post will be seen by some as an invitation to send me hate mail. To anyone who actually does that, well done on your predictable monkey-see-monkey-do knee jerk.

The point of the the post however is that in 8 years of being published I have, to be best of my memory, received only one email or message that could possibly be considered hate mail, and that one struck me as comical.

This state of affairs didn't seem remarkable to me. I just write fantasy books. Why would anyone take the time to write me nasty emails, and why would they think I would give a shit if they did?

However, it seems that I have been living in a bubble. From recent discussions on Facebook and reddit r/fantasy it seems that lots of authors - some of them with very modest sales or in one case whose debut novel hasn't even been published yet - have had plenty of hate mail.

I guess most of it is between those two levels and constitutes aggressive criticism of writing choices and/or any personal information they have hold of.

I haven't conducted an extensive survey but it does seem that the nastier and more personal criticism is focused on female authors and that where male authors report critical emails it tends to fall more into the "scolding" bracket and often concerns use of bad language in the books.


Given that I've sold a fair number of books and that quite a lot of controversy was stirred up around my first book I've found a degree of astonishment when I say that I don't get hate mail.

My theories in this regard are:

i) I'm a male author. Much of this vitriol seems to be reserved for female authors.

ii) I am on a ton of forums and social media platforms. This allows those with gripes to get them off their chests with an audience.

iii) Perhaps something in my books gives the impression that time spent telling me off in an email would be time wasted.


Here is a POLL to gather some more information about how prevalent this is and whether there is a gender gap.

Here are the results after 64 responses. These resulted from posting the link on a number of fantasy writer groups, and are (likely) to all be from authors. I will leave the poll open but note that as I widen the field the data are more likely to be corrupted by non-genuine input from folk who wish to sway the data in either direction to support their world view. 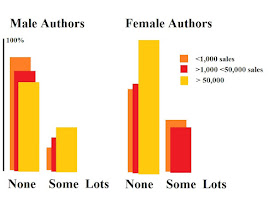 The results shown here are not based on a great number of votes and so the error bars would be sizeable. The takeaway here is that there seem to be no significant differences based on either sales or gender. This does not mean that a significant difference doesn't exist, just that it doesn't appear to be huge and would require much more data to identify.

Another takeaway is that none of these authors is getting a deluge (5+/year) of hate mail, though I am sure that even 1 a year can be very demoralising and it is certainly unacceptable.

The posts that prompted this investigation are in a way self-selecting. Nobody goes on Facebook to post: "Hey! I go NO hate mail today." And because I know a lot of authors I see a fair number of "Hey, I got hate mail today." posts, which can give a false impression of its prevalence.

It is, of course, a sad state of affairs that any authors get any hate mail.

A sobering observation to make is that while many female authors responding to this poll told me, "Nope, I've never had any author hate mail." a lot of them did say that they had had unsolicited sexual messages from strangers who they were pretty sure had no idea they were authors.