My UK publisher sent me an info pack which starts with the page shown here: 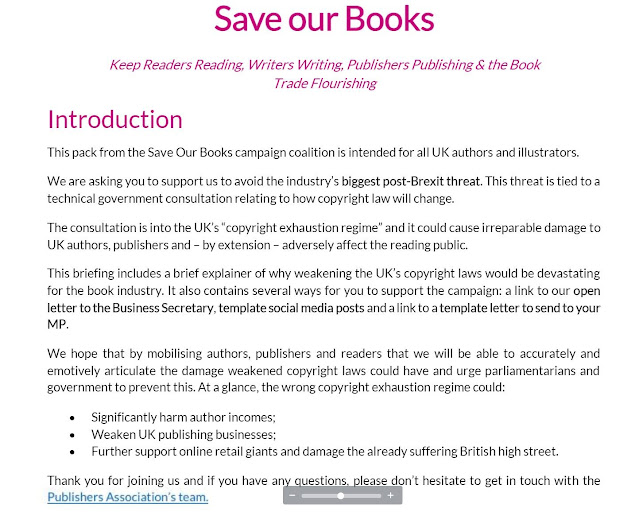 I replied to say that I would do what I could - post on social media as they suggested, write to my MP etc but that it would be very hard to motivate the readership to act.

The simple version: Proposed new law would allow UK retailers to import books from other countries to undercut prices here. So, for example, US editions of my work, or English language copies intended for sale in India could be shipped here.

What's the problem, you ask? Well, the minor issue is people complaining when the cover / size / punctuation doesn't match their UK copies. The major issue is that the publishers estimate a 30% loss of income to both them and to authors.

The problem with the problem is that it can be summarised as "cheaper books". And whilst this characterisation misses the longer term impact on the UK publishing industry and choice and quality, it is simple to get hold of and appealing to readers. People in general won't go the extra mile to look into complicated issues, and I felt that this headline interpretation would sink any effort to fight the new law.

I posted the page above on a Facebook group for fantasy writers. Of the 83 writers to see the post only one bothered to comment... If it's that hard to interest writers in the matter, then what hope to motivate the public to push back against the imposition of the new law?

My personal view is that when someone is selling something they made they should be perfectly entitled to set the price for that thing in any given market. Taking away that right has significant consequences both for the income of creators and for the infrastructure that delivers the product to consumers. With books this could mean yet more globalisation and the resulting loss of diversity and choice, even as the initial stages look like more of both those things.

In any event - I have brought the matter to your attention. Google should allow you to pursue it further should you so wish.

New carpet went down - furniture was moved - and I foolishly reorganised our SFF shelves, which I'd alphabetised ~5 years before and which the forces of entropy had been steadily mixing up since.

Somehow it resulted in me needing to find 4 new shelves, which in turn required me to find homes for a zillion of my own spare titles.

Anyway, I did it! We have 20.8 metres (68.2 feet) of shelving dedicated to SFF books I didn't write. That's not including about 60 books my son's hoarding in his room, or the many children's / YA fantasy books on Celyn's shelves.

Here's a blurry video tour of those 21 metres.

And here are the authors we have 3+ books by