So, I'm running a POLL inviting readers who liked Prince of Thorns and intend to read the rest of the trilogy to register their age and gender.

The numbers are fairly small (235 when I looked last) which means each category has only a few 10s of votes at most, which means we can't place too much meaning on the result. Additionally, it's not sampling my readership as a whole, just my readership who pay attention to my online ramblings and like to vote in polls.

However, it's still fun to take a look. 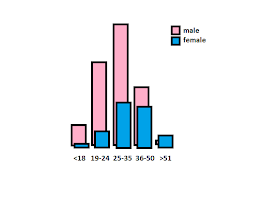 Two things are immediately apparent and both probably have some grain of truth to them.

- Firstly that the gender divide is closer to 2:1 in favor of males than the 1:1 in the population as a whole.


Once the results are gathered the speculation begins.

Does the slant toward older female readers mean that more mature readers are better able to shrug off messages they might get from society about what they should be reading?

It should also be noted that the majority of the response here comes from reddit which _is_ known to have far more male members than female, and that my publisher (who have much better market research) tell me my readers are actually closer to a 60:40 split with female readers in the majority.

How does the gender divide compare with that of:

a) readers as a whole
- A US study showed 62% of women read a work of fiction in the previous year and 48% of men.

b) fantasy readers
-  I don't have stats here, so I'm gathering them with a POLL -- obviously this will be skewed toward my readers unless I manage to spread the word widely.

c) epic fantasy readers
-  I don't have stats here, so I'm gathering them with a POLL -- obviously this will be skewed toward my readers unless I manage to spread the word widely.