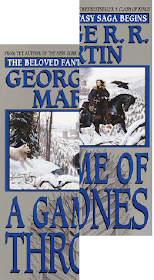 A post sparked by Peter V Brett's recent use of the concept of post-GRRM fantasy.

For many people, indeed for a decent chunk of a whole generation of fantasy authors, George RR Martin's A Game of Thrones was a step change﻿ in the genre.

For me and a lot of other authors Martin's work opened our eyes to what felt like a whole different world of what fantasy writing could be, and we've run out into those new territories eager to try to copy not the style or subtance, but the quality.

In my youth when we entered a fantasy land we were expected to suspending our belief about magic and alternate worlds, but not only that. We were expected to enter a sort of mythic / fairy tale world where people weren't quite... real. They didn't feel like actual regular humans, bound by the same fears, worries, ambitions, aches and pains as you and I - they felt more like actors in roles, cogs in a plot engine, icons and ciphers. They were too good, or too evil.

Fantasy had its conventions and we played within them, reader and author exercised a mutual understanding regarding the rules - rather like ancient Greek theatre, or a musical where for no reason the cast can break from the story into a rousing song.


Of course I exaggerate. And this isn't to say that authors didn't weave fascinating and compelling stories within those conventions. The fantasy of the 70s and 80s kept me very happy and some of it was written by writers of surpassing genius. Even so... it was quite definitely 'apart' from the books that really touched me or showed me new things about 'what it's all about' - works of literary fiction, and miles distant from what 99% of the public was reading.

The step I'm talking about may be entirely artificial or demonstrable fact. It may be that in the 90's when I was reading very little fantasy the genre moved smoothly into what it is now. It may be that GRRM is talked of as a step change by so many simply because his success meant that A Game of Thrones was the first book that fantasy exiles actually picked up after their absence, and thus they saw in it a 'sudden' significant difference ... or it may be that he really did raise the bar in one swift move.

Either way, what he did was to present us with real people. I'm not talking about the 'gritty realism' that is of late so hotly debated in some quarters of the interwebs - I'm just talking about the strength of his characterisation, the creation of real people with everyday weaknesses, wants, ambitions, set in a world that feels like it has a genuine past that matters to them, both on the grand and small scales.

What he did drew many people back into the genre, as readers and as writers. His work was both a challenge and an invitation. He showed what fantasy could be. Real people who didn't carry a particular flaw around like an attribute rolled up in a role-playing game, but who were complex, capable of both good and evil, victims of circumstance, heroes of the moment. Heroes in gleaming mail could suffer from corns without it being a joke. That's a big part of his secret - EVERY ONE IS HUMAN - get behind their eyes and nobody is perfect, nobody is worthless.

I don't write anything like George RR Martin. I don't lay claim to any significant portion of his talent. But I do count myself as one of his many inheritors (in this game you can inherit without requiring the other person to stop writing!). And what I inherited was the desire (if not the ability) to put it all on the page. Fantasy no longer feels like an acquired taste, a club where you have to learn the conventions, the forms, what the masks mean, what the short hand is for... fantasy feels real. And I love it.