The Liar's Key - early rough for the US/UK cover. 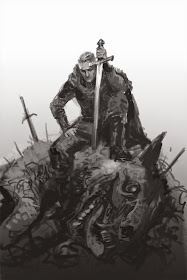 Here's Jason Chan's rough for the cover of The Liar's Key (pre-order the UK version here).

In uniting the two cover styles for Prince of Fools into a single cover for The Liar's Key Jason has had to balance between the tastes of two different publishers/markets and make some interesting compromises.

The UK market (or publishers) are not keen on showing the protagonist's face - wanting the reader to be free to imagine their own version. So in the Liar's Key cover Jalan's sword will cast a heavy line of shadow (not seen here) across his eyes, a mask if you like, offering some ambiguity. And, while the artist has obviously retained the Beckham hair-cut from Chris McGrath's US Prince of Fools cover, he has perhaps given Jalan a little more dramatic flair/swagger more reminiscent of the UK Fools cover. 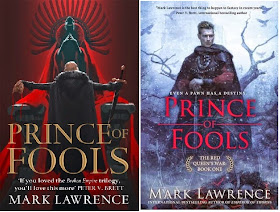 I did suggest a slightly pompous Prince Jal, or for Jal to be clearly edging away from the action but neither publisher believes their customers are ready for an epic fantasy cover to figure a non-heroic 'hero' so that didn't get realised. However, if you _know_ Jal then I think Jason Chan's final effort (to be revealed) leaves a little room to reinterpret the scene.

In any event - I think it's a fine cover and the Jason's undeniable talent has paid off yet again.