[EDIT - a number of links to this page wilfully misrepresent the contents. If you read it for yourself you may well reach a different conclusion, as have a number of famous and successful female authors - at least one of whom features in the comments section.]


Prince of Thorns reached 30,000 ratings on Goodreads today. I remember wondering if it would ever reach 1,000 before people lost interest. It was a realistic concern. In December of 2011, five months after release, the book had 728 ratings.

So, what will I do to mark this milestone? It's traditional to do a stock-take at moments like these, to reflect and draw conclusions.

The launch of Prince of Thorns generated a wave of great reviews and positive feedback, and by that first Christmas the book featured on more than 20 'best of 2011' lists. But, like most of humanity, I remember the negatives too, even though they were thinly scattered among a sea of positives.

Prince of Thorns was met (at least in the fish bowl of the blogosphere) by a controversy over the vanishingly small reference to rape it contains.

Before getting further into this let's first agree that of course Prince of Thorns does have female characters and their role expands in the remainder of the trilogy. In fact the trilogy only has one major character - so either way someone was going to  'lose out'. But rewind. Let's say there actually were none. Zero. So what?

If you google "Prince of Thorns" and "female characters" you'll see a slew of such complaints. Go on, give it a try!

Is there a band of sisters?  Demands one of Requires Hate's standard bearers in response to the book concerning a band of brothers and knowing full well that there is not.

There is, however, still a problem with women. While you wouldn’t expect a woman to be riding with Jorg and his band of thugs, you have to read 150-odd pages before a woman with the slightest bit of agency turns up. And another.

Female characters? Great! Of course literature needs them. 'Strong' has always seemed a silly qualification to me. How about 'well written'? If you write women well, individually and as a whole, then there's no call for 'strong' - you just get 'women' who are variously weak, strong, kind, cruel, etc just as men are.

But, major roles for female characters in every single book, no matter what it's about, no matter what the scope, or the length of the book? Then you lose me. If you replace 'female' with 'male' in the argument I'll object just the same. Does a book covering a day or week on a WWII submarine need a major role for a female character? Must a murder-mystery in a nunnery require the insertion of a man to keep everyone happy?

Prince of Thorns is a pretty short book - you can fit 5.2 copies of it into the word count of George Martin's A Storm of Swords, or A Dance With Dragons. 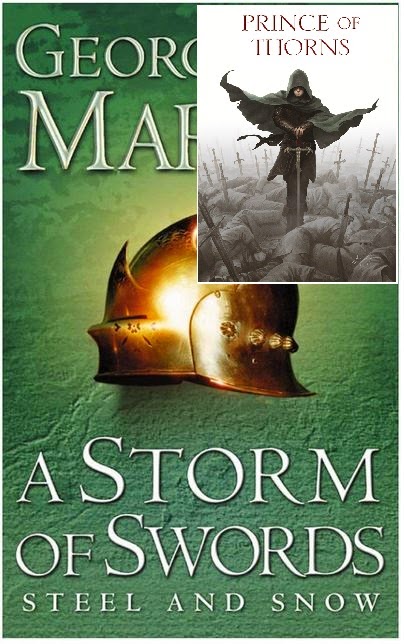 It's a book told from a single point of view over a period of maybe three weeks, the majority of which is spent in the wilds with a band of murdering thugs. It made no sense when I wrote it to shoe-horn in additional female characters - the demand makes no sense to me now.

Yes, you're entirely welcome to prefer stories with particular components. And yes, you're entirely welcome to pick up my books and, on finding that particular component absent, to say 'I didn't enjoy this book because it lacked the thing I like'. But to criticise the author for not putting in that thing you like, as if it were some kind of fundamental flaw in personality, ethics, or decency ... that is, was, and always shall be ... crap.

As a footnote - because some people with an axe to grind conflate the contents of one book with the issues concerning the content/direction of the genre as a whole ... I will state (though I shouldn't have to) that there very likely are issues with the representation of females and minorities in fantasy as a whole. There very likely are a disproportionate number of straight white male protagonists in fantasy books. It's good when we see variety, and the hope that we'll continue to move toward more diverse fantasy that proportionally represents its readers &/or society is laudable. That still doesn't mean that 'this particular book does not contain (enough/the right sort of) female characters' is a valid criticism of that particular book, other than in the sense that it is the reason you didn't enjoy it(*).

(*) I'll moderate that by agreeing that if you're covering many points of view and many characters over a decent period in a setting where we would reasonably expect to see a good mix of genders ... then, yes, the absence of female characters could be a cause for complaint. Which of course brings us back to my original point - one size does not fit all - such criticisms should be dependent on the particulars of the book in question, not as a tick-box on a check-list prepared independent of any knowledge of said book.