Is Grimdark a thing?


I was impressed to discover that there's a definition (of sorts) of Grimdark on Wikipedia ... and I'm on it!

Cited on the page with me as examples (presumably prime) of Grimdark authors are Joe Abercrombie and Richard K Morgan, neither of whom I've read, and George RR Martin, who I have read.

The key ingredients of Grimdark appear to be:

Now, I can't claim an overview - I haven't even read two thirds of my fellow examples! But if I constitute one of the four pillars of the alleged sub-genre (even as the least and last) then it might be instructive to see how these key ingredients apply to my work.

Often associated with moody teenagers, and reasonably so. When children reach the stage where they have to make some decisions, do something with their life, find a place in the world etc it's not unusual to question why you're doing such things, and the lack of concrete answers can be rather unsettling, inducing angst and nihilistic tendencies.

Specific:
Since my first trilogy concerns a young man growing from 14 to 20 it doesn't seem particularly ground breaking that the lad should show some nihilistic tendencies. However, I really don't think that Jorg embodies many of the traits popularly associated with nihilism in youth culture. He is neither mopey nor apathetic. Instead he's ambitious, energetic, with a sense of humour,


Moreover, the nihilism charge is leveled against the whole world in a Grimdark novel. I reject that on the Broken Empire's behalf. We see the world through the eyes of one person in the Broken Empire trilogy - that perception is bound to be coloured by who they are and what they're doing. There's absolutely nothing to suggest, for example, that 98% of the citizens of Crath City aren't perfectly happy, living well-adjusted lives full of joy and well-balanced relationships.

General: Well I've blogged on this before. It's nonsense to say that violence in fantasy is anything new. I've seen violence just as graphic in fantasy books that aren't considered Grimdark as in ones that are, and much 'worse' in other genres.

Specific: The Guardian fantasy columnist told me that Prince of Thorns is full of torture scenes... That's a guy who is paid to read books and write about them. There are no torture scenes in Prince of Thorns. There's a scene in a torture chamber where torture is interrupted by the point-of-view's arrival. And there's one person describing (in non graphic terms) the torture of another person. Put all those words together (neither of them torture scenes) and you have maybe half a page.

I throw this out there as an example of how easily it is to be mislead, or to actively mislead people about the content of a book.

I also point at this quote: (Prince of Thorns) "was exactly as I expected it to be - which is to say, full of unrelenting rape". When of course there were ~61 words in the whole book concerned with rape and they referenced 'off-screen' events.

So, when it comes to the level of something, such as violence, it's very easy to be swayed in your judgement by what other people are saying. Janny Wurts (fine author, great person) told me she thought Prince of Thorns was very well written but too dark for her. I've just started her book Curse of the Mistwraith (great so far, but I'm only 30 pages in). The levels of darkness and violence seem pretty high to me - a sailor clinging to wreckage is beaten to death with oars, the other one in that pair is now trying to provoke the crew into killing him rather than being returned to the king for tortures unspecified... I've said before (provoking a wave of laughter at the Grim Gathering) that I never considered Prince of Thorns to be a particularly dark book. And I really don't. As Jessica Rabbit says: I'm not bad, I'm drawn that way.


Darkness
General: Well, this is a pretty vague one. I guess it's a tone thing. There's certainly 'noir' in film. The city is tall, grimy. and it doesn't stop raining. Whiskey is drunk, the PI is cynical, there's a dame...

But in the books labeled Grimdark? Apart from mine I've read George Martin's, Luke Skull's Grim Company & Sword of the North, Bakker's The Darkness That Comes Before, Richard Ford's Herald of the Storm, Week's Way of Shadows, Lynch's The Lies of Locke Lamora ... I don't see any repeating motifs or themes or tone. Perhaps I'm blind to it, but I don't really buy into that. Returning to my current read ... Wurts has 'the Master of Shadows' front and center, he who is trying to get murdered rather than tortured ... he keeps plunging the ship into unnatural night. That seems to be both literal and literary darkness to me right there.

Specific: In a poll of my readers most considered the Broken Empire books to be 'cheerful'. From my point of view whilst there are ups and downs ... the tone is about defiance as much as anything. A refusal to submit rather than gloom and despair.


Dystopian
General: I see this one a lot. It's possible that many of the people using the term haven't properly considered its meaning. The Hunger Games book is set in a dystopian world. There is an established society that, as in Orwell's 1984, is run along lines that the audience would consider highly undesirable. Someone has made up a bunch of nasty rules and is applying them rigidly to an oppressed populace. Yes there's a resistance but it's a struggling one.

Some of the books I've seen called Grimdark have elements of this. The Lies of Locke Lamora for example. But most of them are actually war-torn. A civil war, countries at war, landscapes ravaged by raiders etc ... none of this is dystopian.


Specific: The Broken Empire isn't dystopian. There's no repugnant order being imposed on a repressed populace. The Broken empire is a chaotic war-torn landscape, and actually during the course of the books Jorg is technically struggling to bring unity and (as a consequence rather than a motivation) peace.

Neither is it dystopian in a 'civilization in decline' sense. Yes in the past there were higher levels of technology/social order. This is also true of say Norman and pre-Norman England - the Romans had more technology and order 1,000 years before. But, like Norman England, the Broken Empire is actually on the up-path from a previous low, rather than on the continuous down path from a distant high. Jorg is a uniter, an empire builder.


Moral ambiguity / Lack of moral certainty
General: While this is certainly true of many of the characters I've seen in books labeled Grimdark it also seems to be true of many others too. To me it's more a sign of mature writing than anything else. Many of the heroes from 80s fantasy didn't feel like real, conflicted, people with doubts and with limits to how much they would risk to do the 'right' thing. You would find those sorts of people in literary fiction, in 20th century classics, but they wouldn't be wielding swords or spells. All, it seems to me, that's happened, is that a greater percentage of fantasy writers have started to try to write 'real people' into their made up worlds, sensing an appetite for it from a more grown-up readership.

Specific: Again, I show the world in the Broken Empire through one set of eyes and that individual is definitely amoral to a large degree. But that doesn't mean the whole world he walks through shares that trait. Many of the occupants do, just as many of us do. But there are certainly people who try to do the right thing, who try to be honest, and who follow/agree with generally accepted definitions of good behaviour.

Conclusion:
Well. If you take something as simple as an undulating 2D surface and consider the issue of mountains and molehills ... people will argue about it. Absent moles, when does a bump move from molehill to mountain? Set a value in height as definition and the bumps that reach one foot to either side of it will rage against that definition.

The stories we tell form a rather more complex manifold in many more dimensions and any attempt to draw a boundary with a few words and label those that fall inside it is going to be open to debate.

I don't have any objection to such attempts, but it does sadden me when I see people saying that they will read only Grimdark or won't ever read Grimdark, That mindset implies a belief that Grimdark is a real thing and that books given such a label really will tick a selection of boxes (they won't) and that by doing so they guarantee to contain a story that will or won't please you (also not true).

We're tribal by nature. Fandom is too. People like labels, not only to define books (and many other things) but by doing so to define themselves through their likes and dislikes. Some take it further - one set of labels constitute friends, and the others enemies. You'll see people blanket-hating (or loving) Grimdark with the same passion that others 'love' Manchester United and 'despise' Liverpool. That's fine. Enjoy. As long as nobody is taking it seriously. 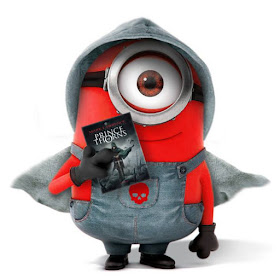