REVIEW: The Lies of Locke Lamora 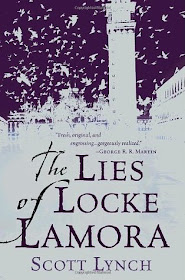 So, I was surprised to discover we owned this book, since it's a very well known book but nobody in my house had ever mentioned it to me.

Turns out my wife bought it, tried it, found it too slow, and gave up. I've convinced her to give it another go.

I enjoyed Locke Lamora and his lies quite a bit. Immediately I liked the writing, which combines wit with solid prose. Like my wife I hit a bit of a soft patch early on, though for me it was that I was finding the point of view very 'surface' sharing almost nothing of Locke's thoughts or desires, leaving him a bit of a blank. Lots of fantasy fans quite like a blank to project themselves onto - but I'm not one of them. Fortunately Locke's personality continued to develop and the point of view seemed to settle a little deeper into him as things progressed.

The real strengths of the book are the plotting, the dialogue, and the atmosphere. The dialogue (banter) brings the Gentlemen Bastards to life, the plotting keeps the reader on their toes, and the city is very well imagined.

I was surprised to find that the light-hearted tone (set primarily by the banter between Locke's gang) actually allows a slew of quite dark themes/scenes to slide past with less impact than they might have. The child prostitution, the gruesome torture scenes, and the mutilation dealt out by our hero are all absent in my own début which is often called out for being very dark.

In any event, I found it to be a rewarding read, well written, and entertaining. I'd recommend any fantasy fan to give it a try.