For the past 11 months you've been able to buy Road Brothers in ebook, a self-published collection of short stories focusing on the individual backstories of Jorg and his companions. Readers seem to like it. It has a 4.9 rating on Amazon. 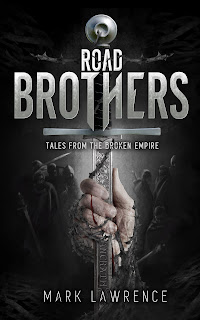 Many people have asked if they can buy it in paperback or hardcover, and the answer has been "no".

This is changing! Voyager are going to publish a new, bigger, better Road Brothers in (I think) the summer of 2017 in the UK. It will be available in hardcover, ebook, and later paperback. I don't yet know what cover it will have or even if it will still be called Road Brothers. It will contain all the current stories, plus the Jorg story from the special edition, and two unpublished short stories, one which focuses on the Nuban and the other which puts the spotlight on Fat Burlow's tenure as leader of the Brothers.

The new material ups the wordcount from 42,000 to 63,000 words, and was a necessary addition for the publishers to take the risk of bringing the work to hardcover and putting it in shops.

I have, however, negotiated to be allowed to give out one of the unpublished additional stories in my newsletter. So just sign up and it will be winging its way to you early next year!