Since I've been given shit before for info-graphics based entirely on the opinions voiced in the Fantasy-Faction facebook group, here are some explanations and disclaimers.

I asked this question to the group's 28,100 members. This blog post is for them.

"The most famous/significant fantasy author you've yet to read?"

At the time of writing there are 177 answers. It stuck me how differently the members viewed significance and fame - this of course through the filter that these are authors they have not yet read.

It's possible that those giving the most obscure answers were spectacularly well-read and really had read all the famous/significant fantasy authors. Moreover fame and significance are not the same thing. Many fantasy authors and hardcore readers consider Gene Wolfe highly significant, his recognition among the wider readership (i.e fame) however is much lower.

The area of the circles are proportional to the number of Goodreads rating that author has. The height on the diagram is roughly correlated to that size.

The relation between Goodreads ratings and sales is time dependent - you can compare books from a similar period and published during Goodreads' existence quite well. The older the book the larger the number you would need to multiply the ratings by to get the sales. Thus two fantasy books published in the early 2010s could have their sales compared with some confidence via ratings numbers.

It is NOT the case that much older books can be compared to newer ones in this manner. Stephen Donaldson (for example) has certainly sold 10x my numbers, but did so largely in the late 70s. His relatively low number of ratings is more an indication of how many people are reading those books today, combined with how many people remember them etc. The fact that Tolkein can still sit near the top is testimony to the spectacular and enduring success of his work.

So, with all that said - here's the data: 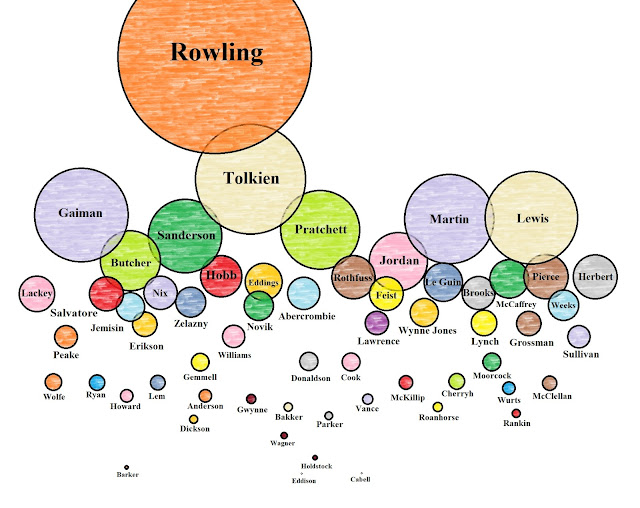