Raffling the Emperor of Thorns manuscript for charity 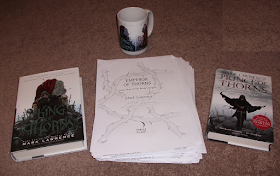 (The original proof copy of the Emperor of Thorns manuscript, complete with my corrections, signed & doodled)

So last year I auctioned the King of Thorns manuscript for charity. It sold for ﻿$400 and my daughter handed the check over to the Children's Hospices South West, a charity that runs a number of hospices for terminally ill and life-limited children. 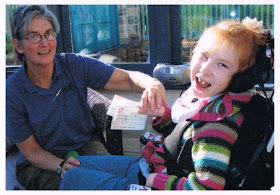 (Celyn, during one of our stays at the hospice)﻿

The only thing that bothered me was that readers who didn't have $400 but would like the manuscript and would like to help sick kids weren't able to take part.

So this year I've decided to try a raffle. You buy your raffle tickets by donating directly to the children's hospice charity. Each $ you give is one ticket (I'll do any necessary currency conversions). Email me the receipt they send you. If for any reason you can't donate via the website contact me on empire_of_thorns@yahoo.co.uk  and we can work something out.

[NOTE: The charity aren't involved in this. They just accept donations - you need to tell ME you've entered and how much you gave so I can allocate tickets to you.]

I'll do the draw in a public and random fashion on June 21st and send out the prize. (The book is out August 6th).

If the prize winner bought $20+ of tickets they'll also get the UK Prince of Thorns hardback signed 1st edition.

If the prize winner bought $40+ of tickets they'll also get the US King of Thorns hardback signed 1st edition.

If the prize winner bought $60+ of tickets they'll also get the pretty mug in the picture showing all three covers.

I'll keep a tally of the donations on this page with shout-outs/links for anyone who'd like one.


Contributors include:
(I encourage you to allow me to thank you here)
(links and attributions are my additions)