One of my readers has a seven year old daughter, Chloe, whose chosen school project involved interviewing a writer.

Reproduced here with the permission of Chloe and her dad. 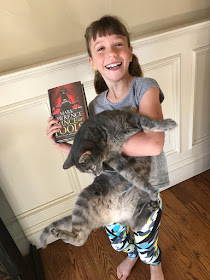 Obviously this is not an invitation to have dozens of children send me their homework!

I enjoy writing, yes. Enjoying writing is an important part of being a writer, and many people seem to forget it. Just wanting to be an author isn't enough.

Q2:    Do you have a favorite character in a book?
I have many. Choosing is hard. Tyrion Lannister from A Game of Thrones, Paddington Bear, Cugel the Clever from Jack Vance's Dying Earth series ... many more.

Q3:    Do you like being a writer?  What’s it like?  Is it hard and fun?
I do. I enjoy chasing stories across the page. I don't find it hard. It's a fairly lazy business. The only pressure is not knowing whether people will pay to read what I write. You don't find that out until much later.

Q6:    Can you write and type fast?
By hand I write very slowly. I can type fast though. I learned when I did a lot of computer programming in my science job.

Q7:    What’s your favorite type of book to read or to write?
Fantasy books! But I also like science fiction and literary fiction.

Q8:    Did you like to write when you were a kid?
I did, but only for English lessons in school. I never thought I would be a writer.

Q9:    Do you like cats?
I do. Especially big, fat, furry ones.
Q10: Do you have a cat? We have two. Their names are Charlie and Rowdy
We have four! They are Fat Tally, she is black and fat and ten years old. Ginger. he's ginger and nearly two. Tortoise, who has tortoiseshell fur and is Ginger's sister from the same litter. And Wobble, who is six months old, very furry, and bigger than all the other cats. He's a Maine Coon. If you Google them you can see how big they get! 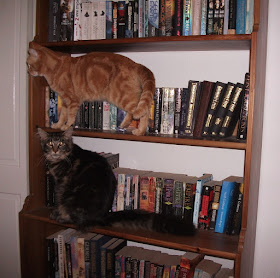