On the fear of imagination.

I read a blog post recently by renowned author, Janny Wurts, that had a number of interesting points to make about imagination and the reaction of society in general to the creativity on display in fantasy writing and art.

One point that resonated with me is that the dismissal and distaste often evidenced when fantasy writing (or art, or pursuits like Dungeons & Dragons) are mentioned can often shade into suspicion and even naked aggression.

Fantasy has become more mainstream of late but it's been a long haul. My main thrust here however concerns the fear of imagination. There's something about descriptions like 'an abundance of imagination' or 'an over-active imagination', that moves often moves us into territory where the person being described is perceived as some sort of threat.

One reaction I've encountered is 'how do you think up things like that?' with a clear subtext that anyone who can do so should be viewed with a certain degree of suspicion. 'That' must clearly be on their mind a lot ... perhaps they want to do 'that' ... are they dangerous? Are they unstable?

Imagination in great excess is a form of sickness & instability. There are mental health issues that are essentially cases of run-away imagination. And so, like a rash or a temperature, an imagination that is particularly vivid or wide-ranging might be (mis?)perceived as a danger sign, something to be moved away from or discouraged.

Investigation (i.e Google) has led me to discover a classification known as Fantasy Prone Personality, sometimes characterized in part by a failure to distinguish the products of imagination from reality.

Clearly there can be times when someone unable to tell the difference between real and imagined could be hazardous!

Further digging (another 60 seconds on Google) revealed a questionnaire from a paper published in Elsvier's journal of Personality and Individual Differences, 2001.

The score is totaled from 25 yes/no questions and the questionnaire is designed to give a measure correlating to the degree of Fantasy Prone Personality the respondent has.

I got an 8, though this was on the basis of being generous towards 'yes' and saying yes to "I sometimes feel that" type questions when 'sometimes' was 'twice'.

Have a go and record your result on this poll. It would be interesting to see how fantasy readers' scores compare to the wider sample in the paper.

Here are the scores of 332 people tested by the researchers:

& our results after 157 answers, with some author scores marked on (click for detail) 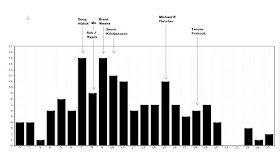 The average in our data is 10.9. My back of the envelope calculation indicates this to be a statistically significant difference. Though the authors look to be clustered around the average. Perhaps a degree of control is require to come up with a consistent, well-paced story!

This article in the Huffington Post also has interesting things to say in this area.

[Obviously this exercise is for fun and not a submission for a journal paper, so if you're an earnest type clutching your newly minted Ph.D and a bucket of indignation ... tuck the former away somewhere appropriate and put your head in the bucket.
Join my Patreon.
Join my 3-emails-a-year mailing list.
]