One of the questions I'm most often asked in the gazillion blog interviews I've done is (second only to "Where do you get your ideas?"):

What are your influences?

It's a question I've always had difficulty answering and am saved from mainly by being able to point at two very clear influences for my first two trilogies.

For Prince of Thorns I'm able to point squarely at A Clockwork Orange (Burgess, 1962)  - at the top level Jorg is very like Burgess' main character, Alex. Also the idea of having a gang, and some of the early road-speak are also products of that influence.

For Prince of Fools I can point at Flashman (MacDonald Fraser, 1969) - Jalan is strongly influenced by the eponymous main character, Flashman, who MacDonald Fraser lifted (name and all) from Tom Brown's Schooldays (Hughes, 1857). So that's more than a century and half of non-fantasy influence behind Jalan's character right there!

Beyond that though, when it comes to all those other aspects, plot, style, world building, etc - whilst I am sure to have been influenced by all the things I've read and seen, I can't lay my finger on the name of an author or book or film and cite them as specific influences. I've no idea. It's like asking me to taste Worcestershire sauce and name the ingredients.

I was 'influenced' to write this blog post by an article in The Telegraph newspaper claiming that fantasy fans had always had a problem with JK Rowling, and that they were enraged (long before any statements on trans people) by her failure to acknowledge her fantasy influences. And in fact by her belief at one point (which has echoes of Terry Goodkind in it) that she wasn't writing fantasy. Moreover she didn't seem to have a particularly high opinion of fantasy and cited a non-fantasy author as her main influence. (And as you'll note above - I've done just that. Twice.)

The newspaper quoted Ursula Le Guin, the parent of magic-schools in fiction:

This last is the situation, as I see it, between my A Wizard of Earthsea and J.K.Rowling’s Harry Potter. I didn’t originate the idea of a school for wizards — if anybody did it was T.H.White, though he did it in single throwaway line and didn’t develop it. I was the first to do that. Years later, Rowling took the idea and developed it along other lines. She didn't plagiarize. She didn’t copy anything. Her book, in fact, could hardly be more different from mine, in style, spirit, everything. The only thing that rankles me is her apparent reluctance to admit that she ever learned anything from other writers. When ignorant critics praised her wonderful originality in inventing the idea of a wizards’ school, and some of them even seemed to believe that she had invented fantasy, she let them do so. This, I think, was ungenerous, and in the long run unwise." 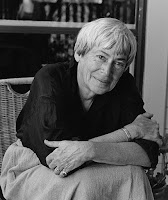 Rowling could also have been influenced by the popular series The Worst Witch (Murphy, 1974) which centred on a magic school, or by several less popular books that also told tales of wizards at school. Hell, Malory Towers (Blyton, 1946) had a boarding school that you got on a special train to reach and that immediately allocated you to one of four towers...

The thing here is that both Rowling and Le Guin are right to a degree.

It's entirely possible that Rowling had read none of these books, and was even wholly unaware of their existence. At the time Prince of Thorns was published I hadn't read or heard of Pat Rothfuss, Joe Abercrombie, Glen Cook, Brandon Sanderson, Brent Weeks, Stephen Erikson, R Scott Bakker, or Scott Lynch. I had literally no name recognition for any of these guys. I still haven't read a book by Cook or Abercombie.

So, enraged as fantasy fans may or may not have been at her lack of acknowledgment of Le Guin or T.H White, or Jill Murphy ... how could she acknowledge people she may never have even heard of? One of the very first things I saw about myself online was something to the effect of "he's obviously inspired by Abercrombie". My mind immediately went (with puzzlement) to Abercrombie and Fitch.

On the other hand, it's very likely that JK Rowling was influenced by writers like White, Le Guin, and Murphy indirectly. Once the idea of a wizard school was out of the box it became part of the public imagination. It might have passed JKR by in conversation, in a cartoon, in a reference, a throw away line in a TV show ... anything. And the tiny seed planted in her mind would have no remembered genealogy by the time it flowered on the page years later. And perhaps with hindsight she could have acknowledged that - though there's always the chance that she independently came up with the idea like Le Guin &/or White. And then she would falsely be downgrading her originality on the chance that an unremembered prompt sparked her to the idea.

All of which is to say that "What are your influences?" is a very tricky question and any answer stands the chance of pissing off someone somewhere!

The Sword of Kaigen wins the prestigious SBFBO Selfie Stick!

Seldom has a literary award doled out a more prestigious and less obviously Dumbledorean trophy than the #SPFBO!

This year's winner of the SELFIE STICK (a trophy which can do actual magic*) is M.L Wang's The Sword of Kaigen.

I'll be sending this M.L's way and hopefully we'll get a photo I can add here. 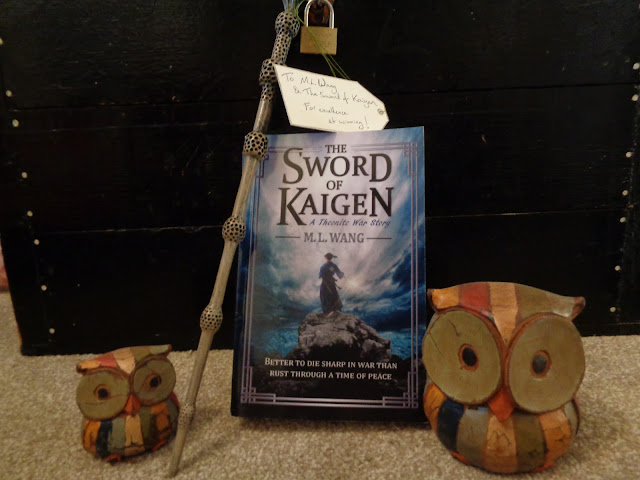 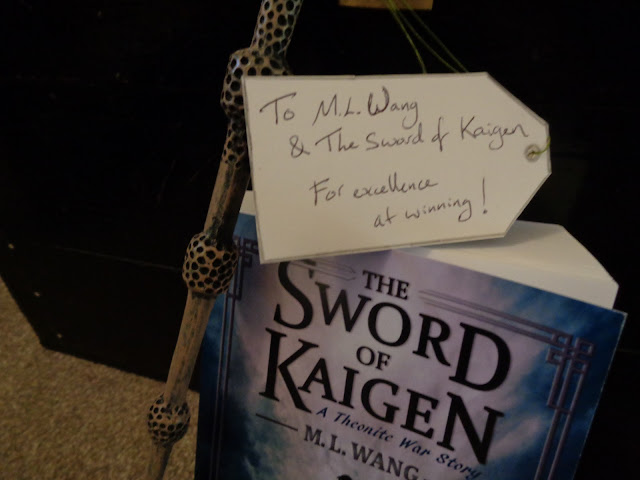 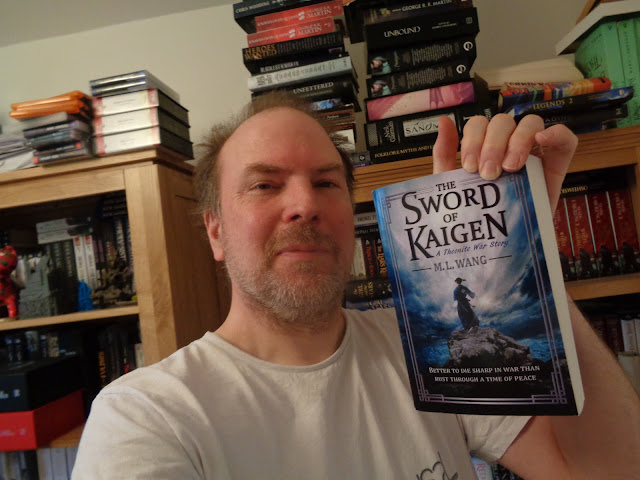 
*cannot do actual magic.
Posted by Mark Lawrence at 12:22 No comments: