A year! One whole year!

Prince of Thorns has now been in print in the US for a year. The paperback was released yesterday. King of Thorns will be released in one week.

An entire year! I could stack enough roller-coasterean cliches up to make a very tall tower, climb it, stretch out and still not come close to touching the strangeness of this whole experience. It's been a mix of mundane and marvellous, an epic of hurry-up-and-wait. The surreal - calls from Hollywood - finding people cared about my opinion for no better reason than I wrote a book folks liked - being a fetish object of hate for extremists blinded by their own righteousness - having people call my book the best (and the worst) they had ever read ... having people moved to tears, left cold ... being ignored by every juried award ... being a finalist for Goodreads best fantasy of 2011 and The Gemmell Morningstar, awards where anyone can vote ... all strangeness and more strangeness.

The picture below is a collage of numbers summarising the year, none of them capture the essence of it, but many of them have occupied me more than they should. So here they are.

Click for detail, though you may be buggered without a touchscreen to enlarge it further. 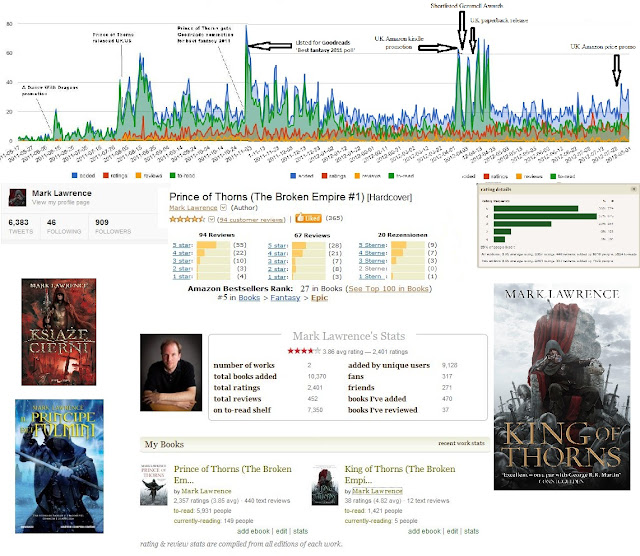 As someone who at least tries to write I should be able to do a better job of describing what the experience has been like - but here's the thing, no experience stands alone. If you had been in my shoes it might all have struck you very differently. For me the context has been seeing my eldest children grow and start lives of their own, raising my youngest with all her complex medical problems, trying to write more books, trying not to lose my day job as the economy tanks and research & development gets axed all over... To properly tell the tale of the year I'd need to tell my own tale - and we ain't got space for that. Maybe one day. But for now I'm going to have to leave it at 'weird'. Hell, let's make that 'weird but good'.

Many thanks for all the very many people who have supported me in so many ways this book-year & here's to the next one!