Vote for your favourite of Jorg's road brothers!

I will graph the results as we go. 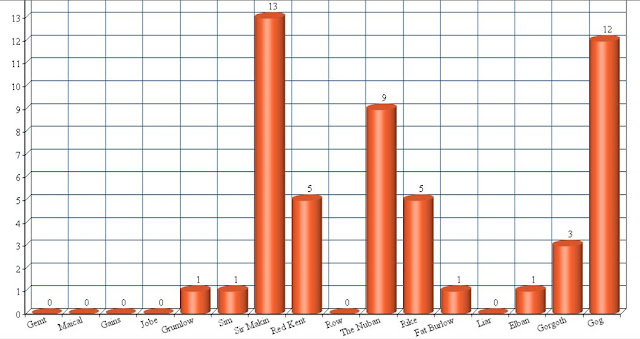 (in the comments or by email/twitter/facebook) in a line or two (no more than 200 words) and you're in for the prize of a signed Emperor of Thorns hardback (to be sent out when they reach me). The more entertaining you are the more chance to win (you can get up to 5 'tickets' in the lottery) - pictures of your favorite are a great way to go - but even 'Rike because he's big' will get you a single ticket!

Brother Maical:
Whatever broke Brother Maical left the outside untouched. He looked as solid and as tough and as sour as the rest of them. Until you asked him a question.
--- I had a soft spot for brother maical... He lived like an idiot and died like an idiot... And revenge was just toooo sweet! (Joel, 2 tickets)

Brother Gains:
Brother Gains wasn’t the cook because he was good at cooking. He was just bad at everything else.
--- I enjoyed him a lot. (Tom, 1 ticket)

Brother Jobe:
Every brotherhood has a pecking order. With brothers like mine you don’t want to be at the bottom of that order. You’re liable to get pecked to death. Brother Jobe had just the right mix of whipped cur and rabies to stay alive there.

Brother Grumlow:
Knife-work is a dirty business, yet Brother Grumlow is always clean
--- I like him because he does his business and then melts back into the shadows. (Tyson, 1 ticket)
--- Brother Grumlow...at least he's clean. And really, there is something impressive about going through all that blood, guts and gore and coming out smelling like flowers. (Nadine, 2 tickets)

Brother Sim:
Assassination is just murder with a touch more precision. Brother Sim is precise.
--- because it seems like there's much more story to him, but we'll never know it. (Anna, 1 ticket)

Brother Makin (Sir Makin):
Brother Makin has high ideals. If he kept to them, we would be enemies. If he nursed his failure, we would not be friends.
--- Brother Makin. He's broken almost just like Jorg, loyal in his own way. Fun to read and support! (Johann, 2 tickets)
--- Brother Makin
He's been with Jorg right from the start, refused to leave his side.
Turned bandit, rogue and vagabond but never lost his stride.
He's just the kind of man to wade knee-deep in mud and muck.
Your faith and trust won't be misplaced-- he'll never pass the buck!

Makintragicandheroictoughbutnottoovicious
Tall and dark with curly locks but two bits shy of gorgeous
Wields a sword, can cut and slice but still not over callous


(Mia, tickets noted on Rike)
--- I'd say Brother Makin, because I found him to be an interesting character as he almost acts as Jorg's conscience, but at the same time he does horrible things along with the rest of the brothers. He also provides a link to Jorg's past, and his potential future. (Big Z, 3 tickets)
--- He's a badass. He's loyal. He let "the record show the accused finds amusement in the facts of his crime." (Mark, 2 tickets)
--- Between his idealism, internal conflict, failings, best efforts, and general baddassery, there's a great deal of depth to the character. (TheSupremeForce, 2 tickets)
--- because he always thinks and doesn't give a fig about anything other than protecting his ideals along with Jorg (Samuel, 2 tickets)

Brother Kent (Red Kent):
Some said that Red Kent had a black heart, and that might be true, but anyone who had seen him take out a six-strong foot patrol with hatchet and knife would tell you the man had an artist’s soul.
--- He's not a bad guy, not a good guy, a victim of sur com stance and his own success ( being a natural born killer ) He's a surviver but also loyal. Like Makin he will be with Jorg near the end I'm sure be it good or bad but still covered in blood." A red day". (Jean-Paul, 3 tickets)
--- Pious as a priest but and artist with a blade - who else believes in God and worry about following the commandments even after they've murdered, stolen and ravaged? None of the other brothers have the such a contrast to their personality either! (Nathaniel, 3 tickets)

Brother Kashta (The Nuban):
Whoever made the Nuban must have fashioned him from bedrock. I never knew a man more solid. He held his words close. Few among the Brothers sought his counsel, men upon the road have little use for conscience, and although he never judged, the Nuban carried judgement with him.
--- Brother Kashta, because he is... was a big one! (Allzweck, 1 ticket)
---The Nuban - also because crossbows are cool. Nuff said (Alicia B, 1 ticket)
--- Brother Kashta for sure. Big strong quiet badass that dispenses street justice and doesn't mess around. (Jaack, 2 tickets)
--- The Nuban. He's badass and smart and knows who's bad news. He's perhaps the most sympathetic of the brothers; it's clear he lives by a code, but he doesn't expect others to live to the same standards he holds himself. (Chilari, 2 tickets)
--- The Nuban. Speak softly and carry a big crossbow. (Kurt, 2 tickets).
--- He may have been the brother of conscience, but that didn't make him good. Honest men don't have to be good. When he spoke, you listened, even if you didn't like what he had to say. (Alicia, 2 tickets)
--- Deep, silent, loyal and powerful. Surely one with the power to travel the river styx unabated (Anon, 1 ticket)
--- he went after the Necromancer while everyone else was dealing with those weak skeletons. Also out of all the road brothers he seemed like the one who was less "bad" if thay makes sense (Brandon, 2 tickets)

I like heads on a spike
That's why the Brother Rike I like.
He'll breach a castle with a moat
From folks inside he'll make a coat.
His list is long of those he's slain,
He revels in inflicting pain.
If Rike you see, go up a tree,
Go here, go there, but please do flee!

I do so like
heads on a spike
Thank you!
Thank you,
Brother Rike!
(Mia, 4 tickets)
--- He could drown the world in his spit. (Wiramu, 1 ticket)
--- he makes the story even more interesting for me with his not too smart common sense and hack and slash approach at most things. He is like the big killing tool which Jorg uses for his own gains, which makes sense as Jorg is a very smart lad. Though I also like that Rikey has that a fear factor and that even Jorg I believe might be a little scared of him. (Richard, 3 tickets)

Brother Burlow (Fat Burlow):
Everyone likes to eat. One man marches on his stomach as much as an army does. Only Fat Burlow didn’t much take to marching, and took too much to munching. And some of the Brothers were apt to hold that against a man. Still, I had more time for old Burlow than I did for most of my road-kin. Of all of them, save Makin, he was the only one who owned to reading. Of course he bore watching for that. There’s a saying on the road, ‘Never trust a lettered man’.
--- Brother Burlow. I just ate a pizza and can sympathize with his fault. I would like to figure out what kind of book Brother Burlow would read! (Longasc, 2 tickets)

Brother Liar:
I named him Liar the day I put a knife through his hand. The knife came out, but the name stuck. He was a mean bit of gristle wrapped round bone. Truth might burn his tongue but his looks didn’t lie.

Brother Elban:
The road may go ever on, but we don’t: we wear out, we break. Age makes different things of different men. It will harden some, sharpen them, to a point. Brother Elban has that toughness, like old leather. But in the end the weakness comes and the rot. Perhaps that’s the fear behind his eyes. Like the salmon, he’s been swimming upstream all his life, and he knows there’s no shallows waiting for him, no still waters. Sometimes I think it would be kindness to make a swift end for Elban, before the fear eats up the man he was.
--- Brother Elban, because I'm firtht... (Davieboy, 2 tickets)

Brother Gorgoth:
There are men to walk to the mountain with and then there are men that are the mountain. Gorgoth, though I may not call him brother, was forged from the qualities I lack.
--- Brother Gorgoth, for so many reasons. As stated, he's essentially the polar opposite of Jorg, so the contrast is nice to see. He's also a giant, post-apocalyptic mutant, and those are always cool. But, perhaps most importantly, he's the Troll King now. I feel there's a more to his story, and I'm hoping for a short story or even a novella somewhere down the road. (Donald, 3 tickets)

Brother Gog:
Skin, bones, and mischief comprise Brother Gog. Monster born and monster bred but there’s little to mark him from Adam save the stippled crimson-on-black of his hide, the dark wells of his eyes, ebony talons on hand and foot, and the thorny projections starting to grow along his spine. Watch him play and run and laugh, and he seems too at ease to be a crack in the world through which all the fires of hell might pour. Watch him burn though, and you will believe it.
--- Brother Gog, since I loved the volcano subplot and how it expanded my view of the world. (Paul, 2 tickets)
---  My favorite was Brother Gog. He was always that innocent, yet ignorant child who looked up to Jorg. He also sparked my favorite quote: "Some people are scared of spiders. I'm afraid of immolation. Also spiders." (Michael, 2 tickets)
---  Gog all the way, [spoiler]! (Rody, 1 ticket)
--- Brother Gog, because he's innocent in his own way and his demon seems to bring out the humanity in Jorg. (Debbie, 2 tickets)
--- He was a monster by appearance, but was actually pure innocence surrounded by real monsters, his fellow brothers. (Doug, 2 tickets)