So I know Jason Hough because he donated money to a children's charity and got his book a place in my Million Dollar Bookshop. 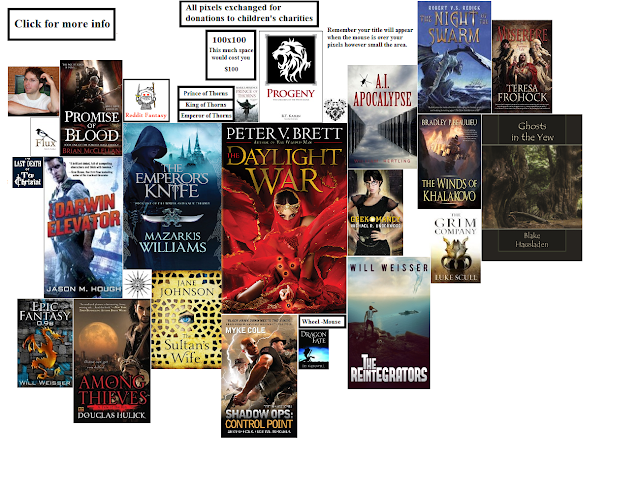 I tweet and facebook post the link regularly and encourage people to try the featured authors. I try to support the authors who have donated when I see an opportunity to and I'm hoping to interview as many of them as I can on this blog. Jason got to the head of the queue with a swift spot of retweeting! 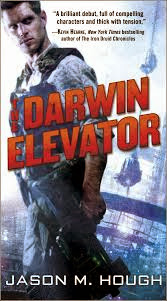 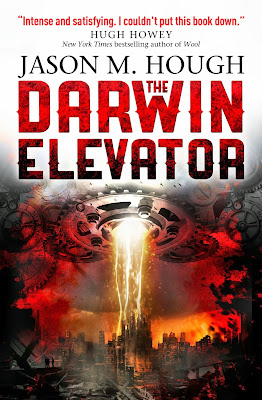 "After aliens constructed an elevator from Darwin, Australia into space, humanity established orbital colonies along the elevator's cord. Years later, those outside of the machines protective aura were wiped out by a mysterious plague. When the elevators virus shield begins to break down, a scavenger and a scientist must unravel the mystery of the failing alien technology to save what's left of the world."

Q1 - Did you choose the location of Darwin for the elevator to get an association with Charles Darwin in there, or is Darwin a place you've been and has some meaning for you, or both?

I needed a location near the equator, and so I simply sat down one day and spun the globe around, looking for somewhere interesting.  Darwin jumped out at me instantly because of the extra connotation.  I knew the title right away, and the more I researched it the more I liked it.

Turns out Darwin is too far form the equator to be considered a suitable location for a human-built space elevator, but from a physics standpoint it would work so placing an alien version there is okay.

Q2 - The covers for The Darwin Elevator in the UK (above left) and the US (above right) are quite different. I like the UK one better. How about you? And given you're probably not going to admit to a favorite maybe you can just talk about the merits of each!

The honest answer is I like the US artwork but prefer the UK "design". The typography, font, and general layout of the UK one appeals to me (plus they embossed the  words and it's a larger size book overall). But the artwork... doesn't have much to do with the story. In fact all the clockwork gears are puzzling.

I'd love to see a combination of the two!

Q3 - All three books of the trilogy have come out in the space of 9 months. What do you think of the practice of quick-releasing a trilogy? If they had come out a year apart it would have given you more time to write something new... or is that not a problem and you've got something ready for us next year already?

Actually they came out in the space of 2 months.  This was not the original plan, but after I turned in book two they asked me if I'd be willing to delay the release of Darwin so that they could put them all out in a short time frame. I was skeptical, to be honest, but the strategy had worked well for Naomi Novik and Kevin Hearne, so ultimately I agreed.  So far it's working for me, too, so I can't really argue with it.

As a reader, I'm torn.  On the one hand I hate waiting years between books in a series.  On the other hand I have so little time to read that I almost feel guilty if I buy multiple books by the same author in the same year.  I guess at least with the fast release schedule you have the option!

Q4 - Skyler Luiken ... I had to check that wasn't an anagram of Luke Skywalker! What sci-fi favorites do you have and have any of them influenced your work. [disclaimer, I hate this sort of question but I needed an excuse for the Luke Skywalker thing]

Believe it or not, the similarity to Luke's name was one of those happy coincidences. Originally the character was named Wiek, after a dutch friend of mine, but during my second draft I decided to change it for a variety of reasons.  I went with Skyler mostly because I think it's a cool name, and is relatively popular in the Netherlands (though they usually spell it Schyler, which I did at first but some beta readers tripped up on this). It was some time after this that I realized the new name was almost a play on Luke Skywalker, and I thought that was sort of cool.

It's probably safe to say that everything I've read, seen or heard before has influenced me to some extent. Star Wars as a kid, certainly, along with Robotech, Indiana Jones, and Aliens. At the time I was reading Arthur C. Clarke, Heinlein, Simmons, and others.  And of course all the video games.

Q5 - You've worked on the Aliens vs Predator games? The very first one of those was brilliant - fast paced and scary as shit. I think that was one of the few PC games to make me yell out in fear - too intense to play for more than 15 minutes at a time - did you work on that 90's title or was it before your time?

Slightly before my time, but not by much. I loved those games, too, but the one I worked on was a realtime strategy game for the PS2 and Xbox called Aliens vs. Predator: Extinction. I had high hopes for the game, and am reasonably proud of it, but unfortunately much of the design had to be chucked in order to meet schedule, and that sadly removed most of the strategy elements, leaving it somewhat lacking.

Q6 - You're not related to the Hough of the eponymous transform that's been helping image processing scientists find lines since 1962?

Not that I'm aware of!

Q7 - How much consideration/research have you done into the well established theory and proposals for space elevators, or did you avoid the physics of it all with your invocation of aliens? It's cool if you did - I'm just interested. I guess the answer might help place you on the spectrum of sci-fi between the hard-core science geek end and the character-focused space opera end.

It's more of a character-driven space opera, with some accurate physics and some "movie physics".  My goal was always to write something heavy on character, action, and adventure. Accurate physics or not, I wanted to avoid a science-heavy book because I know so many people who avoid sci-fi for that reason.  In the end I probably got as much right as I got wrong, and certainly there will be some readers who are want flawless science in their sci-fi.  That's fine, and honestly I enjoy those types of novels, too, but it wasn't what I was going for and I feel that side of the sci-fi market is very well represented by authors much smarter than myself.

In the end I have no regrets, and I've received emails in roughly equal proportion with compliments and complaints (sometimes in the same message).