We're moving house, just around the corner. My youngest daughter needs more downstairs space to accommodate the needs rising from her disability.

So, chez Lawrence it's all boxes (mostly full of books) and the discovery of things for which the fact of being unseen and unused for 10 years still isn't sufficient evidence on which to throw them away.

One discovery has been copies of the issues of the first two magazines I had fiction published in. 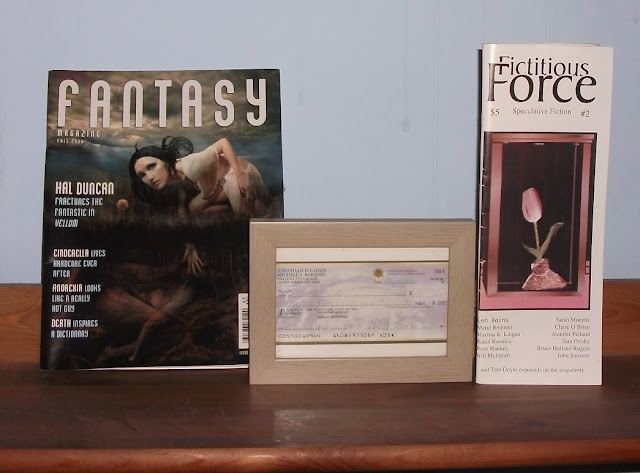 I was first in print (on paper) in Fictitious Force magazine issue 2, 2006, under a pen name. And there beside the copy in a $1 frame is the check they sent me. My first earnings from writing fiction. $34.

Fantasy magazine was my next score, also 2006.

Fictitious Force went out of business a year or two later. Fantasy magazine was in print only from 2005-2007, moving online thereafter and combining with Lightspeed in 2012.

I had two copies of each. I've chucked one, but somehow I want to let the copies pictured gather dust unread for another 10 years...