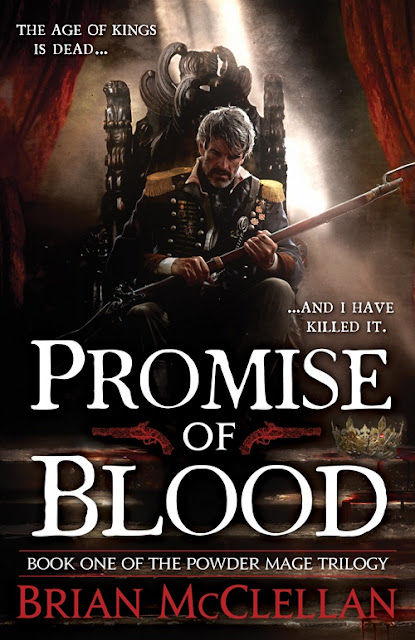 This book took me a while to read - so you might take that to mean it's easily put down. Actually it wasn't really, the main trouble for me was that when I did put it down the bugger vanished. EVERY. TIME. I've never had a book that's such an escape artist. I half-thought the cover might have an adaptive camouflage mode...

When I did get to hold onto it for any period I found the book highly readable.

The characters and description are good. MClellan's real forte though is in building tension and intrigue, slowly raising the tempo while wrapping the various threads around each other in satisfying ways. The man's a story-teller.

I've read some excellent books of late, including Blood Song, Fool's Assassin, and The Name of the Wind. Promise of Blood held it's head up among that lot and wasn't overshadowed.

i) (trivial) One of the countries mentioned several times was called Fatrasta. And for some reason every time someone mentioned Fatrasta my mind filled with images of over-weight Rastafarians ... couldn't say why.

ii) The magic. I understand many readers love highly structured 'magic systems'. Brandon Sanderson (who I've not yet read) is famed for them. I wouldn't say Promise of Blood had a highly structured magic system, excepting that the different disciplines were clearly distinct - certainly we're not talking Dungeons & Dragons rulebook magic here. And I'm very glad of it. HOWEVER, for me the magic felt ... how can I put it ... fake? arbitrary? ... The thing to do is swallow it whole (which I managed) and enjoy the book (which I really did). But every once in a while the whole Privileged thing with special gloves and each finger linked to a different element just made me wince and want to say 'really?' ... and the powder mages with all their weird bullet magic linked to snorting gunpowder ... again ... why? what? And if gunpowder gives you magic powers to deflect bullets in flight etc... can't those telekinetic abilities be applied to objects that ... are NOT bullets?

Before I'm dragged to the guillotine ... note the FIVE STARS and the fact that these are QUIBBLES. I _really_ liked this book. Brian McClellan is a fine writer. I recommend you read his debut.

Finally - it was cool that Brian got his own love of cooking into the book in a big way. It was a refreshing and original idea.