The folks at Voyager know I am a fan of Robin Hobb and were kind enough to send me #4 of 50 in this limited edition of Assassin's Fate. 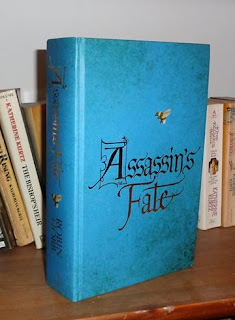 Why the fuss? Well, this book is the conclusion of a twenty-two year journey (over fifty years in book time) through the world Robin Hobb has created. The protagonist who has led us in that journey is Fitz, the assassin mentioned in the title (and the apprentice mentioned in the title of the first book, Assassin's Apprentice, released in 1995). 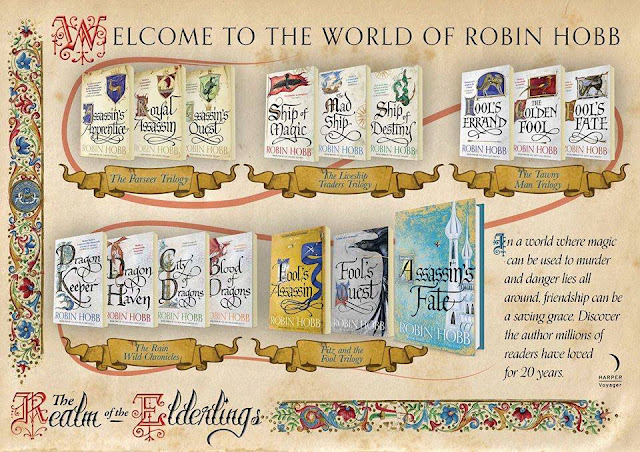 Though Fitz (as far as I know) only appears in the Fitz & Fool series which are the 1st, 3rd and 5th series in the image above.

Now, to the book! First I should note that I haven't read the Liveship or Rain Wild series. This is significant as although those books and their characters don't seem to have any significant impact on the Tawny Man trilogy, they do have a minor impact on Fool's Quest and a major impact on Assassin's Fate.

Because of my not having read those two series I am certain that sizable chunks of Assassin's Fate had far less impact on me that they otherwise would have had. Much of this book is spent travelling on liveships crewed by people who I believe are central to the Liveship trilogy, and passing through ports where yet more characters from that series reside. There are many points in Assassin's Fate where I had the distinct feeling that an event was somehow momentous ... but it passed me by. As a writer I could tell that the story was spending far too long with some "minor" characters and understood that this must because they had in previous books earned their right to page time.

So, although I've given the book 5* there is the chance that had I read those other 7 books I might have been raging that I couldn't give it 6*! Also, the 5* are based on the power, impact and entertainment from those sections where I wasn't missing anything.


To the text in hand! Well, you all know how Robin Hobb writes. Slow, beautiful prose, building character relationships, turning the screw on the protagonists, piling on the hurt, and then to a conclusion. The same thing happens in this book. The writing is rich and satisfying and I consumed the first two thirds of the novel in many small bites. Toward the end when we largely won clear of the characters and plot lines from the books I haven't read I began to move more quickly through the pages. The pace and tension pick up and you really begin to wonder what the end game will consist of. How will Fitz, the Fool and little Bee end up? Will Hobb show any mercy to these characters we've grown to love (over decades for Fitz and the Fool)?


I enjoyed the Bee thread the most, possibly because it was free of the Liveship/Rainwilds entanglements. Also Bee is a fierce and determined little creature that it's impossible not to root for. After having so much abuse heaped upon her it's very satisfying on the occasions that Bee strikes back.

I won't go into the plot. Hobb continues to paint a rich, interesting, and integrated world, she works her usual magic with the story, and it's a great read. Then you get to the last fifty or a hundred pages. The finale that 21 years, 17 books, and the several fictional lives have been building up to.

I thought I was handling it pretty well. Several things happened that I thought might happen and I bit my lip and carried on reading. Then...

HIGHLIGHT FOR MEDIUM SPOILER:  A certain wolf is taken to speak to an aging queen.

I don't know why that scene was so powerful for me where others flowed over me. But it was. And from that point on had I not been such a manly author of GRIMDARK I would probably have been working my way through a box of tissues and pretending to any nearby family that I had hay-fever.

So, the ultimate ending... Bitter sweet as you might expect. Lots of bitter, and a fair bit of sweet too. Capping off such an epic work of fiction / literature was always going to be a monumental ask. To my mind Robin Hobb pulled it off. She managed to close the back cover on story in a way that stayed true to the characters and all that had gone before, and in a way that will likely have a lasting impact on the fantasy landscape. The ending will certainly stay with me, joining my small internal collection of iconic fantasy moments.

So, get reading. I won't lie, it's going to hurt, but you'll also be glad that you did it.