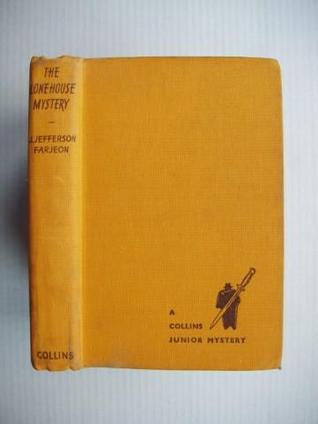 I re-read this at the hospice with Celyn some 40 years after my last read.
This is a book I had to add to Goodreads because it wasn't there!
Congratulations, you’re on your way to being a forgotten author. That's what this book tells me.
As a child I read and enjoyed (several times) a book called The Lone House Mystery. If it had a dust jacket it was long gone when I got to the book. The front cover declares it ‘A Collins Junior Mystery’. The spine reports the author as one J.Jefferson Farjeon. Shortly after joining Goodreads.com I tried to find the book in their database (containing millions of titles) and rate it. It wasn’t there and none of the 11 million members have added it to the list of books.
It wasn’t until I rediscovered the book on our shelves at home recently that I was convinced I’d got the details right. But I had. Inside the front cover in my mother’s handwriting is a large declaration of her ownership with a painted border. She would have been quite a small girl when she got the book new in 1949.
The book may not be mentioned on Goodreads but J.Jefferson Farjeon is. The site lists 10 of his books and says he wrote at least 70 others. The write up for Farjeon (1883-1955) includes:
-----------
Joseph Jefferson Farjeon was always going to be a writer as, born in London, he was the son of Benjamin Farjeon who at the time was a well-known novelist whose other children were Eleanor Farjeon, who became a childen's writer, and Herbert Farjeon, who became a playwright and who wrote the well-respected 'A Cricket Bag'.
The family were descended from Thomas Jefferson but it was his maternal grandfather, the American actor Joseph Jefferson, after whom Joseph was named. He was educated privately and at Peterborough Lodge and one of his early jobs, from 1910 to 1920, was doing some editorial work for the Amalgamated Press.
He also wrote a number of plays, some of which were filmed, most notably Number Seventeen which was produced by Alfred Hitchcock in 1932, and many short stories.
When he died at Hove in Sussex in 1955 his obituary in The Times wrote of his "deserved popularity for ingenious and entertaining plots and characterization".
---------
So, 80 books, obituary in the Times, a play for Hitchcock, born of actors and writers, descended from Thomas Jefferson ... and the 11 million members of Goodreads have given 10 of his 80 books a grand total of 11 ratings.
Time is the fire in which we burn and also the tide that drowns us.
Extraordinarily few writers are noticed at all and the vast majority of those are lost from memory with the passage of five or twenty-five years. Sixty-some years has all but erased J.Jefferson.
So. I read his book again. I started reading it to my daughter but she got bored – it is rather dry and dated – and since it’s short and I knew the story I finished it for my own nostalgia.
The book was written and set very soon after the war. Three posh children outwit common and vulgar crooks. It has some similarities with Enid Blyton’s Famous Five in that respect. The book isn’t without charm or imagination though, and I do enjoy the ‘rather’, ‘do be a sport’ ‘I say’ ‘keep your pecker up’ ‘jolly rotten’ etc. The strong moral messages and reiteration that our three children are made of the right stuff are ... directed at children. Nobody here is complex except perhaps for a repentant thief – it is a children’s book after all and it was entertaining when I read it in 1972/3/4 less so now.
The plot is implausible and discordant notes are struck when the crooks produce pistols and shots are fired and our children blithely carry on defending the house they’re ensconced in with a hose pipe. Possibly the proximity to the war put a different perspective on things at the time ... I don’t know. It seems bizarre now – as does the curious lack of emotion from their family who lose them from a train into a snow storm and don’t find them for three days. Most would expect the thaw to reveal frozen corpses . . .
So in the end, putting nostalgia aside, I’ll give this 2* for ‘ok’. It has dated, and it’s too dry for today’s 8-12 year olds who have so much else on offer, and too shallow for the 13+ who might read past the old fashioned language.
So back on the shelf it goes and J.Jefferson’s shade can slip back into the nameless horde of thousands of other popular authors who we’ve forgotten that we forgot.