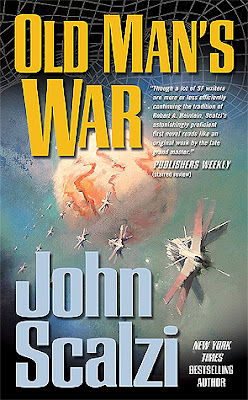 This is, for me, a pretty short review as the key novel element here is one that it is fun to discover in the book, and not spoiling that severely limits what I can discuss.

I really enjoyed Old Man's War and think you should read it. For me it was a 5* first half and a 3* second half (I liked the 2nd half but it wasn't 5* 'amazing'). Scalzi can write! He opens with excellent characterization, touching and real. This skill at bringing the POV character to life, at catching the vibe of a vital individual grown old and isolated, combines with a great plot hook. It's vivid modern almost literary writing unfolding a fascinating take on future earth.

The first half felt modern with a gentle touch on characterization, a fresh idea, diversity, a book of its time. The second half felt more like 60's/70's sci-fi - blasting bad guys in space. EE Doc Smith could have written it. That's by no means a bad thing. I enjoyed it. You may well too. But the transition from a very personal earth-bound story to a space romp didn't quite gell for me.

From the "hard" scifi point of view this also felt old fashioned in a Star Wars sense. Star Wars serves us WWI biplane aerial combat in the guise of space warfare. X-Wing pilots literally look out of their cockpit windows for the enemy. It's enjoyable nonsense. Old Man's War is similar, serving up a mix between WWI and Trojan war combat for infantry, ignoring much of the current and likely future developments in technology that would radically change this, probably make it redundant (and likely make it much more boring). Think Starship Troopers, where they fly across light years to die in droves machine gunning alien bugs.


These minor nits aside, this is a fun, interesting, exciting, funny book. Read it.