Since we will shortly be embroiled in the next Self-Published Fantasy Blog-Off, I thought I would look at some of the contestants.

It may very well be that our finalists and winner lie among the lesser known entrants. That would be in line with the contest's goal of bringing an unknown gem of a book into public view.

Here, however, I look at some of the more successful books among this year's entries. I have graphed the 28 titles (~10% of the field) with >200 ratings on Goodreads. Though to be clear, a book with 200 ratings is still pretty much unknown. 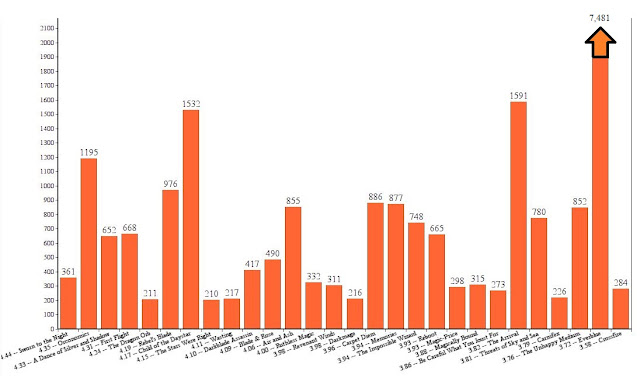 This of course brings us to a discussion of what (if anything) the average rating of a book on Goodreads can tell us.

However, there are many other factors at work.

i) A book's average score decreases rapidly over the first 1,000 ratings and slowly over the next 20,000. I call this the Goodreads Droop. Early ratings are aided by friends, family, enthusiastic readers, and sympathy for a lesser known book. Later ratings tend to be lower as less enthusiastic readers are drawn in by recommendations and kick back against the hype.

ii) Some subgenres are more generous than others. YA ratings, for example, are typically higher. Young readers often have read fewer books and are less jaded.

iv) A book that effectively targets its niche will rate highly. If a book has a very definite readership in mind and manages to convey that message, it will rate more highly. For example, if the book manages through its title, cover, &/or marketing to let potential readers know that it is romance, or LitRPG etc, then those readers will be happy. If you hid a romance novel under a cover with an axe wielding maniac on it and the title Blood Flood ... it would likely rate poorly even if it were the best fantasy romance ever written.