Bitching, George RR Martin, and the underbelly of fandoms.

Eleven years ago Neil Gaiman put it succinctly: George RR Martin is not your bitch.

This is an old horse, long ago beaten to death in many of the internet's alleyways.

But today I had occasion to see how deep and persistent the crazy is. I had a short story in GRRM's Wild Cards universe published on Tor.com. It's a story and a character I'm quite proud of, and The Visitor's origin story in Knaves Over Queens is, I think, one of my best. It did at least prompt GRRM to call me an excellent writer 😀.

Anyway, GRRM tweeted about it today.

Note: The Wild Cards series has been an enduring passion for GRRM since he started it in 1986, a full ten years before A Game of Thrones was published.

Also note: GRRM hasn't written any of the stories in the recent instalments of the series that I've been involved in or seen. He's the head editor but the low to medium level of editing is done by other editors. So his role is important in guiding the thing and keeping the tone and history consistent, but not significant in terms of the time it would occupy out of a year's work.

You have to go to the 30th reply on the tweet to find one that's not scolding him about Winds of Winter. Here are some of the comments: 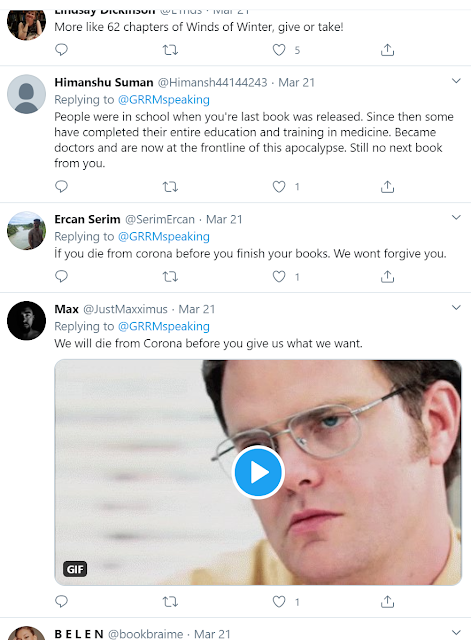 So I looked at the replies to some of his other tweets - something I hope GRRM never does.

In January he tweeted that he was very saddened by the death of Mike Resnik and linked to a heartfelt post about his old friend and mentor. These were the first three replies: 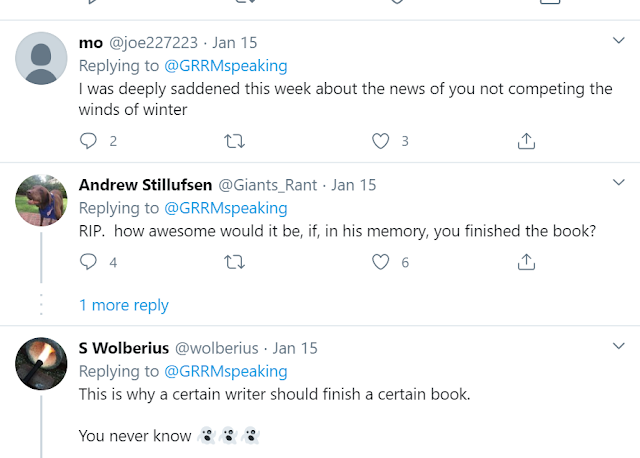 There's some ugly shit right there.

Writing is a difficult business and the retirement age in many countries is around 65 (in Brazil it was 55 for women (who live longer anyway) and 60 for men until recently 😲). GRRM is 71. Many of us would be expecting to have been kicking back and doing whatever retired people do for the last 6 years by age 71.

If you're upset that the final instalments of A Game of Ice and Fire have taken so long, then by all means make your own private plans not to buy them if/when they come out. Declare your disinterest and move on.

I doubt though that you're as disappointed as the author. GRRM has written some of the world's most popular and beloved books. That's a rare and stellar talent. Don't pretend to know how difficult that was or how hard it is to sustain. I'm a writer and I know many writers. Authors at all levels of success struggle with the act of creation. It is not the turning of a handle on a sausage machine. It is not a mechanical process that can be forced. It varies hugely for person to person - it is deeply personal - it is deeply connected to mental health. Yesterday I spent all the writing time available to me playing a single game of Bookworm. World news had pushed my mind to a place where I couldn't focus on writing. I know authors who have missed generous deadlines and one who surrendered to the fact that his series would not be finished. These are not people rolling in writing money, too busy living the high life to knuckle down and type. These are people for whom writing is everything - who maintain day jobs to pay the bills - who dream of success, or more importantly of their stories finding readers (the distinction being that it's not money driving them but the desire to tell their tales).

So yes, it's disappointing when a great series that you're loving slows or stops. But trolling an old man on the internet ... that's pathetic. Nobody wants those books written more than GRRM does. But if you think heckling him at every opportunity is going to do anything other than make you part of something ugly ... then ... you know nothing, John Doe.