Goodbye to all that.

Goodbye to All That - an excellent book and an apt sentiment for the year.

Even in its dying days the twists keep coming. Everything from the bizarre to the disastrous.

Let me regale you with the two latest examples - bizarre first.

I have been (at least according to a man I have no reason to doubt) nominated for a Nobel Prize. Which is - as I'm sure you've just thought to yourself - total madness. And it's neither of the first two flavours you might think of though I've never been within a million miles of qualifying in either Science or Literature.

Apparently the policy document on police reform that I made a really really tiny contribution to has snowballed into something large and the whole enterprise (and thereby collectively all the contributors) has been nominated for the Nobel Peace Prize by an individual qualified to make such nominations. It will be one of 100+ nominations and has zero chance of winning, but it's still a wholly bizarre thing to be told in a Facebook chat that you're a Nobel prize nominee!

The second, deeply unwelcome, example is happening right now. I'm in hospital with my youngest child and will be spending at least the next five days here while she's on IV antibiotics for sepsis. So we'll be seeing in 2021 from this room: 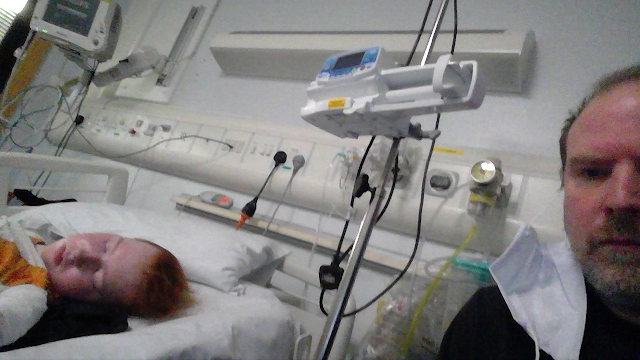 I hope you all have a better night of it and that 2021 treats us all more kindly.
(update) we were in for 9 days but the medicine did its thing and we're back home!