So, one of the most common questions asked in blog-terviews is do I listen to music whilst writing? And the answer is 'Generally, no.' I find it distracting, or I blank it out completely, so what's the point.

I do however get lots of ideas when listening to music, which I then file away for later. Mostly they're ideas about feelings, vibes that I want to capture. That feeling I just got listening to this track, those chills right there - I want to put them on the page somehow. 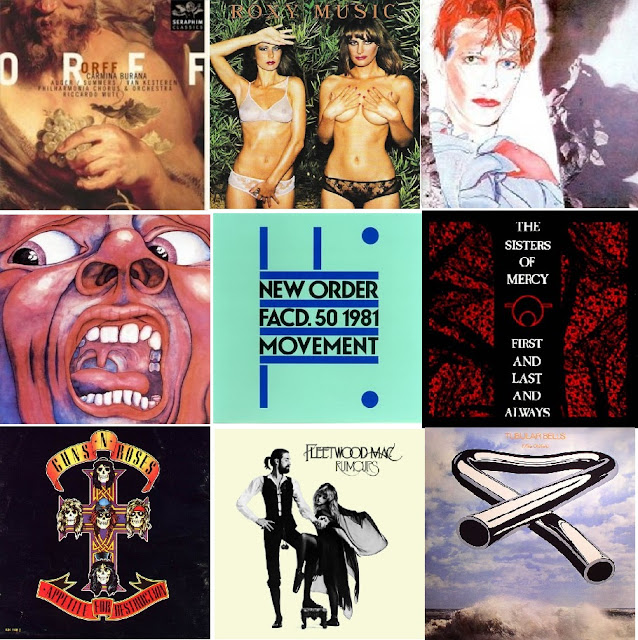 The odd thing is that whilst I have all the musicality of the average house brick and am really tone deaf, not just the self-depreciating kind, I love music and can be deeply and easily moved by it. I guess that's like a reader who can't write so well but sees/feels/gets all the subtlety and sophistication and passion of a well written book.

Anyhow. I've slapped up the covers of nine albums that made a big impression on me. Like most people my earliest music encounters hit the hardest and have proved the most enduring, just as we are with books . . . and most other things. What hits the wet clay of youth, sticks. And of course that's largely a random process. I didn't listen to every song on offer and make an informed decision. Half these albums were in the record collection of my parents or their friends. The other half were amongst those foisted on me by my friends as we grew. They're just the score that happened to accompany me on my way to being 21. And because I'm older than most of my readers they'll probably leave you going, who?