So last year I made a 'A whole year!' post on both sides of the experience of having a book out for a year. I overused the word 'surreal' and dished out a bunch of statistics.

Emperor of Thorns is released in the UK and Australia today, it comes out in the US and Canada in 5 days time. Currently thanks to being Deal of the Week on UK Amazon the hardback is ranked #84 in all books and has #15th place on the Best Sellers in Epic Fantasy list with George RR Martin occupying 12 spaces above it. 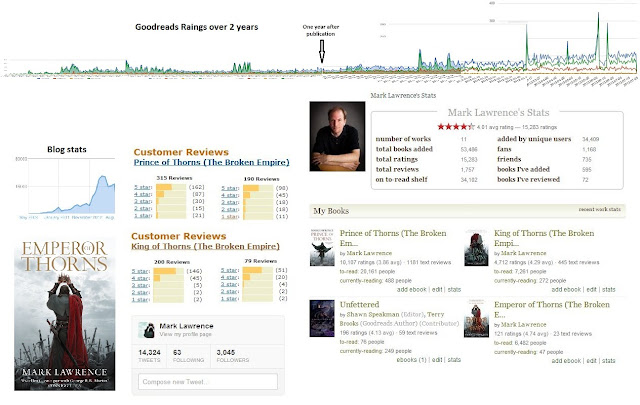 So, it's only been two years and already we're at the end! The trilogy is complete. I could have chosen to write another three books of Jorg, another six... and people do. Financially it would be a good idea. The received wisdom is that if you're lucky enough to find something that sells... stick to it like grim death! The chances are that every time you make a change you'll lose a huge number of readers and accelerate the downward spiral that is the typical career path of most writers - not most writers you love, they're the special lucky ones, but most writers out there start with a small *boom* and then nosedive, so if you catch an up-current... you stick with it.

Rather stupidly I held my story higher than my bank balance and have called time on Jorg. There's a power in ending things. I hope that if people ever have chats about the Jorg and his tale it won't be the typical 'which book did you read up to / give up on' that characterizes 12-part serials that only halt because sales drop past the point of sustainability. I hope that all parties in this hypothetical water-cooler convo will have read the trilogy and be glad in retrospect that I knew where to stop.

Do I wish Tolkien had written another 6 Lord of the Rings books where we follow Frodo and Aragorn on into new adventures? As much as I love LotR I'm rather glad he didn't. I'm not claiming the same grandeur for the Broken Empire, just the same desire.

Obviously long series have worked spectacularly before, but with a tightly focused single-PoV character driven story... well, in my bones I knew it was time to stop.

Taking a leaf from Tolkien and other fantasy writers though, I do have some other stories to tell in and about the world of the Broken Empire and will be telling them for a while to come yet.

Very many thanks to everyone who has been part of the journey.

Prince of Fools - the tale of a cowardly womanizing bully whose luck runs out in the Broken Empire
Posted by Mark Lawrence at 06:51