Best book of the trilogy?

Authors don't tend to like cliches but if you ask them which of their books they like best then they tend to roll out the old line about choosing between your children.

And it's true - when you're that close to a book you love its parts rather than the whole, and ranking one book over another becomes an impossibility. Instead I've turned to the readers and asked them. Many found the bald choice to be almost as tough a prospect as I did when I considered it. 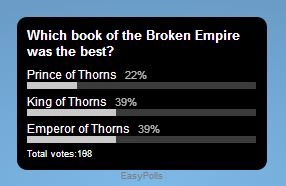 Of course such choices are harsh and artificial but it's interesting to see nonetheless.

I suspect authors have a built in bias to want their most recent book to be judged the best since they like to feel they're improving, but I'm happy to see an even split myself.

Really the books should be judged by what they're trying to achieve and the context they're in. Prince of Thorns I like for its pace and for capturing that raw, immature, bridge-burning, defiant, hurt, and dangerous younger side of Jorg. King of Thorns I like for the twisty-ness of the timeline, the interdependence of the threads, the passion of the ending, and the growth in our protagonist. And Emperor I like for its sense of focusing down: on a place, on a time, on a person, and for the fact it brought about an ending which I felt held up rather than let down what had come before.