So, this is the US cover for Prince of Fools, the work of artist Chris McGrath. 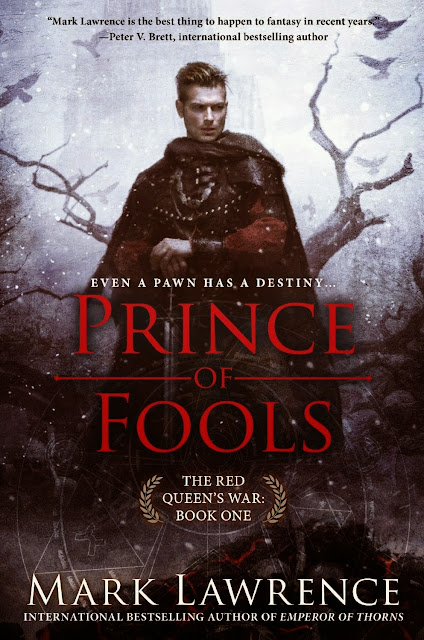 And the book itself is available for pre-order, with a price guarantee so that if (as almost always happens) the price is reduced before release, the price of your pre-order goes down to match.

Pre-orders are very important to authors - they help bookshops decide whether to order and how many, they help Amazon and other retailers decide about discounts, promotion, and stock (they discount popular books, not unpopular ones).

Or add it to your shelf on Goodreads

Here is the blurb from the UK edition:

The Red Queen is old but the kings of the Broken Empire fear her as they fear no other.
Her grandson Jalan Kendeth is a coward, a cheat and a womaniser; and tenth in line to the throne. While his grandmother shapes the destiny of millions, Prince Jalan pursues his debauched pleasures. Until he gets entangled with Snorri ver Snagason, a huge Norse axe man, and dragged against his will to the icy north.

In a journey across half the Broken Empire, Jalan flees minions of the Dead King, agrees to duel an upstart prince named Jorg Ancrath, and meets the ice witch, Skilfar, all the time seeking a way to part company with Snorri before the Norseman’s quest leads them to face his enemies in the black fort on the edge of the Bitter Ice.

Experience does not lend Jalan wisdom; but here and there he unearths a corner of the truth. He discovers that they are all pieces on a board, pieces that may be being played in the long, secret war the Red Queen has waged throughout her reign, against the powers that stand behind thrones and nations, and for higher stakes than land or gold.