This stage is now complete. For the finalists and reviews in phase 2 check out the final page.

I'm hoping the bloggers will use #SelfPubFantasyBlogOff or #SPFBO tags to make it easier for everyone to find articles/reviews via Google. 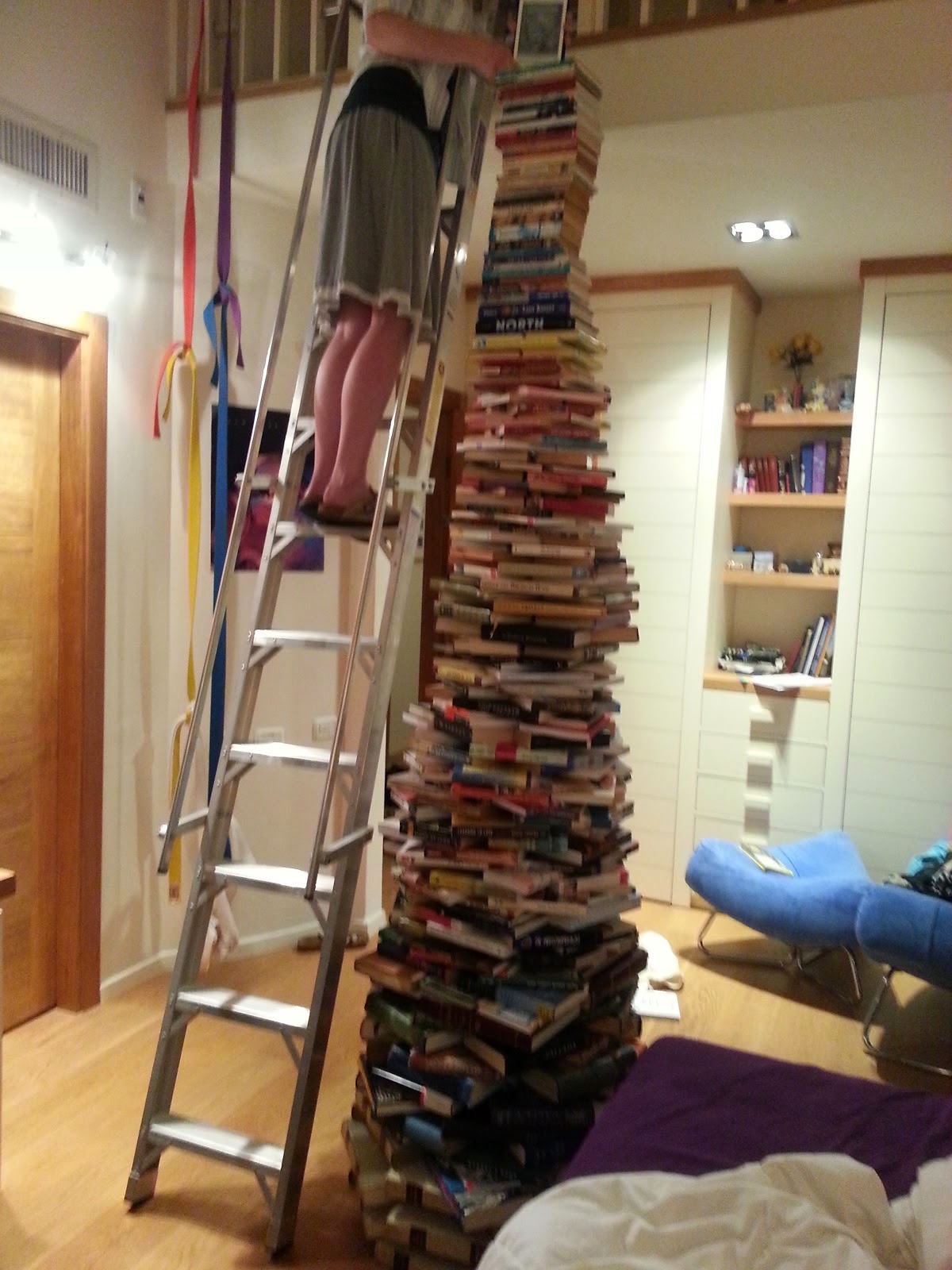 First let me say thank you to all the authors who sent their work in. You were so numerous I wasn't able to respond individually but at the end of this post is a list of all the entries I received, which blogger they went to, and whether they were in the 25 for that blogger that will definitely be considered (1-25), or in the excess that may be considered if the blogger is feeling extra energetic.

Almost everyone who sent in thanked me for taking the time to do this - of course I've spent only a modest amount of time on the project and it is the bloggers who are going to put in the real hours.

Almost everyone who sent in thanked me for the opportunity. And it is a great opportunity - but let's take a moment to keep expectations real here. We have over 250 entries. Each blogger is going to select the book they feel is best from the 25+ entries sent to them. That means that 96%+ of you will fail at the first hurdle. That's just the unforgiving mathematics of the thing.

You may have written a great book, but there may be one in that 25+ that the blogger likes better.

Here are my views on 'failure'.

And here is a post about this effort on Fantasy-Faction full of interesting statistics about famous authors and rejection.

The deadline for bloggers selecting their champion who they will 'publish' into the final round is September 1st. I will link their decisions and reviews here as and when they are made. If all 10 bloggers turn in their decisions early we will move into round 2 early.

I must put in an extra word of thanks here for Sarah Chorn of Bookworm Blues who helped me refine the format. 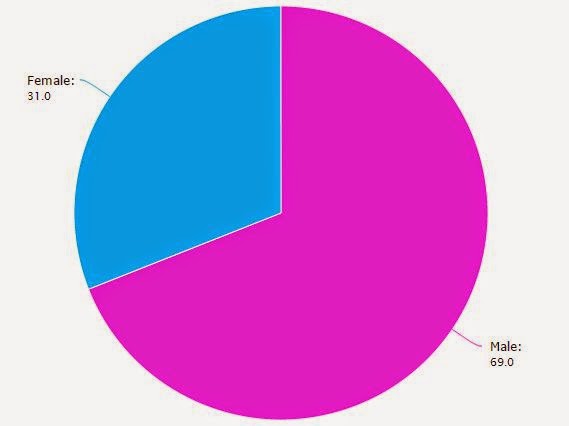 By my count 80 of the 260 entries (31%) passed to the bloggers are from female authors - a slight underestimate no doubt as I assumed the owners of names like Alex and Andy to be male.

Bob Milne of Beauty in Ruins on blurbs, covers, and titles.
Lynn Williams of Lynn's Books reviews His Own Good Sword by Amanda McCrina.
Ria of Bibliotropic on titles, covers, and blurbs.
Sarah Chorn of Bookworm Blues divides to conquer!
Elitist Book Reviews outline their slush-strategy.
An update from Lynn's Books.
Here an 11th man has a sift through the slush.
On The Fictional Hangout Milo reviews Fire and Ice by Patty Jansen.
Ria of Bibliotropic reviews Son of a Dark Wizard.
Ria of Bibliotropic starts an update list.
Elitist Book Reviews like The Thief Who Pulled On Trouble's Braids.
On Fantasy Book Critic: Mihir makes a start-up post.
Bob Milne of Beauty in Ruins sets up a page to keep track of progress.
Lynn Williams keeps track of progress here.
Sand and Blood is reviewed on Elitist Book Reviews.
The guys at Fantasy Book Review reduce their pile to five to be read cover to cover.
I try to soften the blow for authors whose books haven't made the cut.
Tyson at the Speculative Book Review reviews his first 5 books and picks his favourite so far.
On Fantasy Book Review, a blog about the most common reasons for books failing the cut.
Bibliotropic, choosing is HARD.
Tough love for self-published covers on Elitist Book Reviews!
Milo updates us on progress at the Fictional Hangout.
We reach the 25% marker and I sum up progress across the board.
First decisions from Fantasy Book Critic.
Tyson at Speculative Book Review covers books 6-11 & picks a 2nd favourite.
Bob Milne at Beauty in Ruins reviews his first 5 titles.
Ria of Bibliotropic reduces to a final 8 and offers last thoughts to the 18 who were cut.
Tyson reads and cuts five more titles.
A strong contender for round 2 is reviewed on Bibliotropic!
Ria of Bibliotropic guest blogs about self-publishing lessons learned from her 'agenting' so far.
Lynn puts some books aside and pursues others on Lynn's Books.
On Bookworm Blues Sarah goes through her second batch.
On a Fictional Hangout Milo reviews Sins of a Sovereignty.
Why you're failing: The beginning of your novel is a promise. From Elitist Book Reviews. (they're right!)
An interview with contestant Barbara J Webb on Bibliotropic.
On Beauty in Ruins Bob finds five in a row that don't grab him.
Mihir zeros in on a final 6 at Fantasy Book Critic.
On Bibliotropic Ria reviews Altdorf by JK Swift.
Elitist Book Reviews advises on internet presence.
Five more titles considered on Beauty in Ruins.
On Bibliotropic a review of Scrapplings by Amelia Smith
On the Elitist Book Review issues arising around PoV in SPFBO entries.
Tyson at the Speculative Book Review reviews his last 10 titles and picks his 4 contenders!
Fantasy-Faction select 6 for more consideration and drop 6, scroll to #3 in the list below to see.
The folk at Elitist Book Reviews wield the scythe on their crop.
The first champion is chosen! By Tyson at the Speculative Book Review.
Milo short-lists 2 and cuts 7 at the Fictional Hangout.
Fantasy-Faction zero in on their final 9 (scroll down to their list) each of which is being read and scored by 2 people. Highest score wins.
State of the nation report at 75% through phase 1.
Ria of Bibliotropic selects her champion for phase 2.
The guys at the Fantasy Book Review choose their champion!
Fantasy-Faction review Exile by James Cormier.
Bob Milne executes another batch of 5 on Beauty in Ruins!
Fantasy Faction narrow down to three (scroll down to list #3) One of the three was reviewed on the site just before the SPFBO started.
Round 3 of reviews at Bookworm Blues!
Marc Aplin of Fantasy-Faction on why self-publishing isn't the way to go.
Venn in doubt - I blog on the self-pub vs trad-pub debate.
Round 4 of reviews at Bookworm Blues!
Round 5 of reviews (the last batch) at Bookworm Blues!
Bob Milne reviews his last batch of titles on Beauty in Ruins.
On Beauty in Ruins, Bob Milne selects his champion for phase 2! (link will re-establish today)
On Fantasy Book Critic, Mihir Wanchoo selects his champion for phase 2!
Sarah Chorn of Bookworm Blues selects her champion for phase2!
On Fantasy Book Critic Mihir reviews his choice for phase 2.
On Lynn's Books a champion for phase 2 is selected!
The Weight of a Crown is reviewed on Lynn's Books
Elitist Book Reviews choose a finalist!
Fantasy-Faction choose a finalist!
The Fictional Hangout announce their finalist!
D. Moonfire crunches the SPFBO numbers and lists the entrants, noting honourable mentions as well as finalists.

I also have state-of-the-nation posts for:

Look here for the list of finalists.
See the phase two matrix - the final round!

On to the final!

Here's a wordle made on the all the titles! 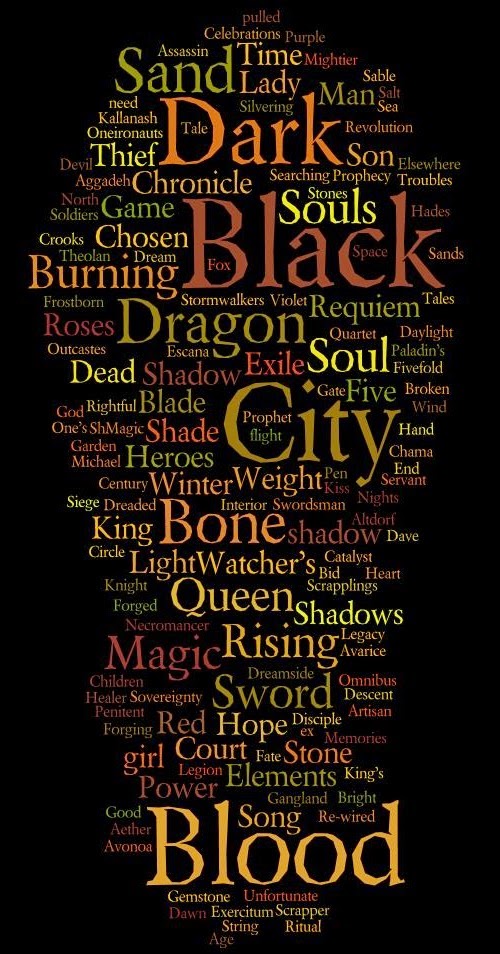 It appears that the ideal ... or at least mode ... title would be "Dark Black City of Blood"


Entrants: (red = not selected, faint green = a contender, black=not read yet)
(I'm only going by blog posts here so more is happening behind the scenes)

6. Milo of The Fictional Hangout

7. Bob Milne of Beauty in Ruins

10. The guys at Fantasy Book Review