All The Liar's Key reviews I know about so far

As is traditional I'm keeping a list of early reviews for my newest book: 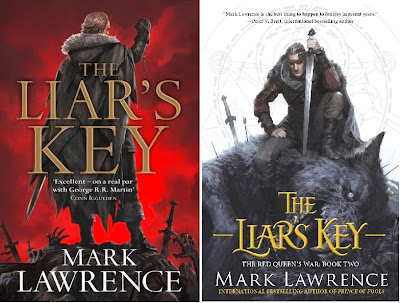 "The dialogue is a humorous, frightening lullaby that flawlessly depicts this dark, disturbing universe and its meticulously constructed characters, both friends and fiends."

"For those who have not read it, the Broken Empire series is an excellent fantasy series, one that take the reader right to the edge, page after page…. and yet I have found myself enjoying the Red Queen's War much more."

"This is a great second book in the series.  Lawrence takes what we already know and with his own inimitable style continues to layer extra goodness on top. "

"I dare you not to get hooked!"

"The Liar’s Key is the kind of sequel every reader dreams about."


Reviews from a book-obsessed Human

"I’m not sure how Lawrence does it, but everything he writes is amazing. I’m already counting the days until the next book in the trilogy comes out."

" Mark gives us a perfect second book that, just like Jalan, is far more faceted that most. I’m already looking forward to starting it again."

"The Liar’s Key is Mark Lawrence’s best effort to date."

"[Prince of Fools] was quite a delightful read. So, I'm happy to say, is this second volume."

"The Liar’s Key is a book that, once started, is near impossible to put down, immersing the reader in a world seen through a unique pair of eyes"

"Mark Lawrence should be commended on another excellent book "

"early on, I will admit to a few shadows of doubt"

"If you haven’t read Prince of Fools already, do that first; if you have, then you owe it to yourself to pick up this scintillating sequel."


And the month is nearly up, so I'll stop here. Many thanks to these bloggers and all the bloggers to come who take the time to read my books and voice their opinions!