One 'complaint' I've seen about Prince of Thorns comes wearing a number of hats. I've put quotes about 'complaint' as it's not always a complaint - sometimes it's a compliment.

And whether it's a complaint or a compliment or somewhere in between is a matter of the individual's perspective. Perspective is at the heart of the issue.

Imagine the Normandy beach landings, but turned up to 11, where 99.999% of the soldiers were left dead on the beach. Imagine a lottery where 99.999999% of players don't win the jackpot, imagine ... anything where most people lose. It's not hard.

Now imagine you choose one person at random in this beach landing. If they turn out to be the one that makes it to the headland, the one who bullets carve past left and right with millimeters to spare, the one who trips and falls just when he would have been shot otherwise, the one whose cigarette lighter stops a bayonet ... you'd look at that and say "This man's ridiculously lucky, what are the odds? He's wearing plot armour!"

Now change your perspective. In a lottery (if the rules are set that way) someone must win. The probability of you winning is 0.000000001 but the probability that someone wins is 1.

Along comes the writer. There's a story to be told about the lottery winner / hero who makes the headland. If they write the story of that hero (Fred Smith in boat 32, John's cousin) in the first person then there's a pretty big clue that they're not going to die in chapter 1 or chapter 10. Bullets will carve past Fred. He will duck at the right moment and it won't be because he was clever. It will be luck. But it won't be unreasonable stupid luck that the author was insane to expect you to swallow ... this actually happened. Because the perspective has changed, because (in statistical speak) we have a priori knowledge, it's not unlikely or unreasonable.

We don't see the article about the lottery winner in the newspaper and cry, "Jesus fuck! What are the odds that the reporter chose the winner to write about."

Swap now from reality to fiction. The author still has a choice about who they write about. They can still pick the person who survives, at least long enough to do some interesting things. But they also get to choose how that person survives. 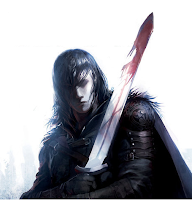 What follows has some SPOILERS for Prince of Thorns, written in a way to keep them vague-ish, but they're still sort of big.

In Prince of Thorns I had those choices. I could choose to have Jorg overcome his challenges by his cleverness, by someone else's, by luck, or by combinations of those factors.

It's book one in a trilogy written in the first person, so crying 'plot armour' at each turn does seem a tad bizarre to me.

I've seen some reader comments that betray confusion over the writing process. They say things like "XXXX wrote himself into a corner and this deus ex was all they could do to get out of it."

The trouble is that such accusations often carry the bewildering implication that the author has no more imagination than a frog and no more idea of what they're doing than a sufficient number of monkeys typing...

It's possible that over the course of several books, especially if they're not planned and the early ones are published (and thus set in stone) before the later ones are written, that a writer might dig themselves into such a hole plot-wise. Something large-scale that creeps up around them.

But I've seen this accusation thrown repeatedly at the tourney scene in Prince of Thorns.

Consider:
There is no mention of the tourney at any point in the book right up to the moment that Jorg chances upon it in chapter 44. And 7,000 words later and it's all over. I can write 10,000 words on a good day. If I had 'dug myself into a hole' from which the only exit I could manage was something I found to be stupid, slipshod and detrimental to the book ... I would have not had a tourney.

In fact the accusation of LUCK (deus ex, plot armour) is leveled at how Jorg defeats one enemy at the tourney. This particular conflict consumes 1,300 words. I can write 1,300 words in half an hour. It is not possible to dig oneself into a 1,300 word hole. Said hole does not reach the ankles of a writer.

Another accusation leveled at Jorg is that of Mary Sue (Gary Stu), not infrequently by the same person complaining of LUCK.

Consider:
In this tournament Jorg is bested in combat and saved from certain death by a friend, then bested in magic (strength and focus of will) and saved by a piece of luck.

His Mary Sue dress is starting to look a little tattered. He's very good at fighting and he has a very strong will, but he's not the best at either of those things in this small patch of the map.

So, let's come to this piece of luck that saves our hero from death by magic. Jorg proves unable to exert his will over that of his enemy (strike against Maryness). The writer has him prevail by lucky happenstance. As if he'd tripped over just when needed so that the bullet didn't hit him, like our friend on Omaha Beach (see above).

The accusation is that I was too poor a writer to think of any other solution. Remember, we're talking 1,300 words here and included in those solutions would simple options such as:

a) not having Jorg meet this guy
b) making this guy less powerful
c) making Jorg's will stronger - having him grit his teeth and win the contest rather than lose
d) having Jorg discover some weakness in his foe before hand
e) not having this guy in the book
f) shooting him with arrows from a way off
g) any one of 38 other easy to think of options, many of which would avoid having to redo that 30 minutes worth of writing.

OK. So what actually is the deal here? Why did things go down the way they went down?

Because I thought about it and made a choice to write it that way.

Because I thought about how so many stories are written and how the hero seems to triumph through planning, or virtue, or trying really hard, or demonstrating some admirable quality, or some cunning confluence of plot elements that suddenly seems inevitable, or...

And I didn't want to write that. I wanted Jorg to have something in common with Fred Smith staggering up onto the headland at Normandy with the body-strewn beach behind him. I wanted him to be a lucky fucker who so easily could have caught a bullet like his mates did. I wanted to say that somehow no matter how hard you try you're going to lose. I wanted to give the reader (and myself) a different take on things.