I have a long-standing tradition of celebrating Prince of Thorns hitting multiples of 10,000 Goodreads ratings.

The first of these was a piece defending the right of any book to feature a cast that was overwhelmingly one gender.


Since this coincides nicely with the release of Red Sister and with Prince of Fools passing 15,000 ratings, I thought I'd blog on those too.

I held a trio of polls asking simply:

Is Prince of Thorns a grimdark book?

Is Prince of Fools a grimdark book?

Is Red Sister a grimdark book?


The results at the time of writing stand thusly: 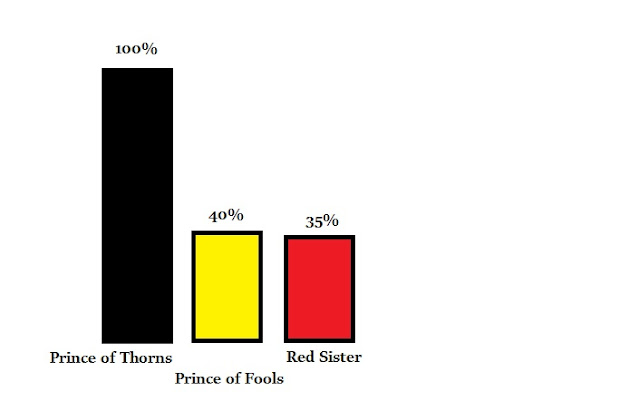 Red Sister is my fastest selling book and highest rated series opener, and has been getting very encouraging reviews. It's human nature though to look at the negative reviews too.

First let me note that there is an option on those polls above to vote neither yes or no and to record the fact that you don't know what grimdark is. I would have taken that option. I have noted my confusion over what exactly grimdark is on several (1 2 3 4) occasions!

However, the interesting thing seems to be that contrary to some distressed opinions bemoaning that by moving from a main character that's a wise-cracking young man to one that is an earnest young girl I have stepped away from the true path of grimdark ... it seems that according to these polls the step away came in 2014 with a book that most readers considered not to be grimdark.

Some male reviewers have made a clearer distinction. It wasn't the departure from grimdark (a term I had never heard until after finishing the Broken Empire trilogy) that upset them, it was simply that they didn't want to read a book that focused on girls. And I can't argue with any reader's personal tastes. To me it does seem strange though. I could better understand if it was an objection to the type of story they were involved in. But girls are hardly a different species. And even if they were ... I loved the hell out of Watership Down.


Anyway. The reaction has been generally excellent and I was surprised more by quite how large a portion of my existing readership took so enthusiastically to this new tale than by those left behind.

I'm excited to see how readers take to Grey Sister next year and Holy Sister the year after. And of course I continue to be heartened by how many new readers are still coming to Prince of Thorns and following Jorg on his bloody path through the Broken Empire.