I've sold tens of thousands of books on which I earn 2.25% of the cover price. The implication being that 97.75% goes to someone who didn't write the words behind that cover.

This blog is about those numbers and why I feel the situation to be reasonable. I'll say it up front for anyone lacking the stamina to read any further: I have no complaints whatsoever about my publishers. I am happy with the contract I signed.

My royalty on a book depends upon the price at which the vendor purchases it from the publisher. For paperbacks sold in the UK I get 4.5% of the cover price if the discount to the vendor is greater than 62.5%. I imagine a vendor gets that level of discount by buying in bulk. So Amazon for example will very likely get this discount, meaning I earn 4.5% of cover price on each paperback of mine they sell.

I very frequently get requests for signatures. The cheapest solution is to send a 'book plate', a sticky white label which I've signed and can be stuck in the book.

Let's say you buy my whole trilogy in paperback from Amazon and ask me to send you my signature to stick in the books. 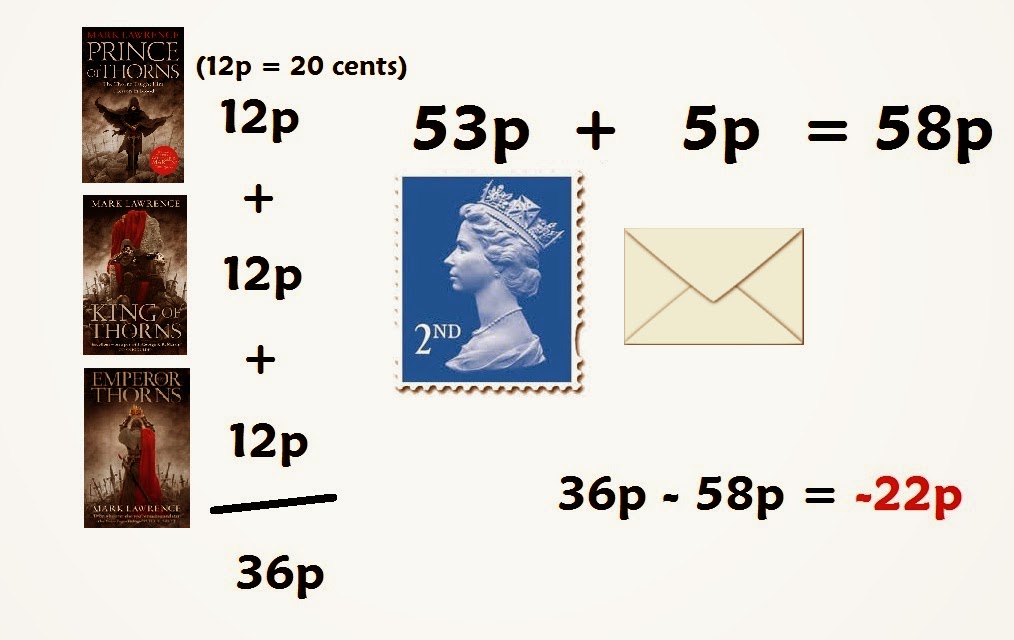 Another way of looking at it is that to make £1000 (the typical monthly rent on a 4 bedroom house where I live - I need 4 bedrooms, I have 3 children at home, one with complex needs) I would need to sell 8333 paperbacks on Amazon. A great many books do not sell 8000 copies in their lifespan, very few indeed sell 8000 a month!

So, why do I think this is a reasonable state of affairs?

Well, first let's caveat these figures by saying that I make significantly more per copy on ebooks, hardcovers, and even paperbacks from bricks and mortar stores probably make me more. Plus, you can double the figures if they're sold in the US.

The first big point here though is that I was offered a good number of deals and signed the one I ended up with. I was under no pressure.

The second big point is that I got a large advance. I much preferred getting that advance to getting a smaller one and possibly larger percentages of each book sold. I didn't know how many books I would sell - most books do not earn out their advance. Mine have, but I didn't know that they were going to and an advance is guaranteed money ahead of time that I don't have to pay back even if I sold just 3 copies. That security was very appealing.

My publisher gambled that money on me. They took all the financial risk. The people behind it staked their professional judgement on my work. If the books had crashed and burned those people's careers would have been damaged, the money lost.

If someone gambles and wins I don't then whine that they have lots of money.

And where did they get the money to gamble in the first place? It came from profits made on successful authors. The very high-selling authors (the successful gambles) subsidize the new authors and allow them to be given a chance.

Success is not guaranteed. I co-authored a book before my Prince of Thorns deal that was published after Prince of Thorns came out, and with a different publisher under a different name. We got a good advance. The book did not come close to earning out. Just as I am not complaining that on some books I make 12p a copy I am not complaining that on my less successful book if you divide the advance by the number sold I made a considerable sum per copy.

Hopefully now I am helping to pay an advance for a new author a couple of places behind me in the queue. 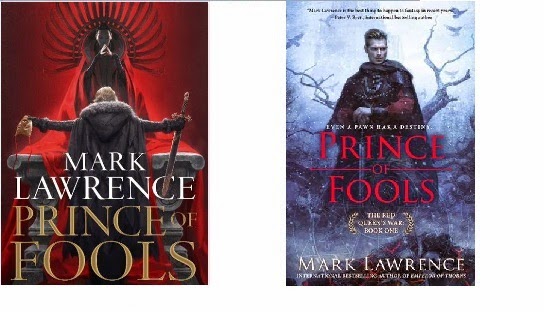 And whatever the percentage or absolute sum I make on copies sold, publishing is far from the most lucrative business on the planet. I have had personal contact over the past three years with publishers that have gone bust and with other publishers that have lost large sums and are struggling to survive. That, more than anything else, convinces me that far from being ripped off I am in fact being dealt with fairly.

I know that in these heady days of self-publishing miracles it's popular to damn the greedy publishers and call for the cutting out of the 'middle men' ... but I just don't feel that way at all.

The other day someone told me that whatever marketing publishers do is irrelevant because he had got hold of my book without any input from the publisher.

He said that all an author need do is email a copy of their book to 20 'notable' bloggers and if it was any good they would be set.

Here's the thing though - those 'notable' bloggers are drowning in books. They receive far more paper books than they can read, and many times more than that in ecopy from hopeful self-published authors. How do they decide what to pick? Very often it's a book that has a 'buzz', or they rely on the quality filtering done by major publishers and pick one from a well known imprint. Bloggers typically want to blog about books that other people have heard of and are likely to read. It's an enormously difficult thing to make it as a self-published author and those that succeed have my greatest respect.

So the reason this guy had heard of my books in order to choose to read them was because other people were talking about them, and that process was seeded by my publishers putting their reputation behind my title and mailing copies to many bloggers/reviewers to give them the chance to read it.

So the tl:dr = Publishers i) take the financial risk ii) deserve to profit on the occasions their gambles pay off iii) use those profits to bring forward more authors