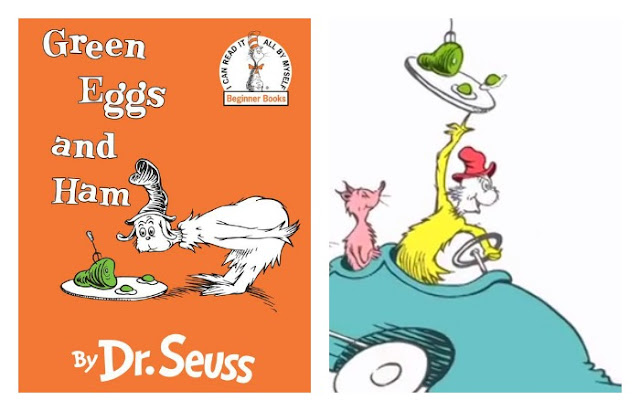 There are two kinds of people in the world. Those who like green eggs and ham, and those who don't.
Well, three. Those who like green eggs and ham. Those who don't. And those who like the green eggs but not the ham. It's just ham, not green ham. We should get that straight. Oh, correction, it's green ham too.
Anyhow four kinds of people. The haters, the likers, the green egg but not green hammers, and the green hammers but not green eggs.
Actually I guess there are the people who would eat them with a fox, but not in a box. And some who would eat them with a fox, in a box, on a train, but not with a goat.
Ok. So there are lots of kinds of people in the world. Dr Seuss invents diversity. Kudos.
Really the book is about the key existential question in the 20th and 21st centuries. Green food, yes or no, and under what conditions. It's a metaphor for where a man ... or woman ... or thing called Sam ... draws the line.
Where people, where will you draw that line?
Green eggs and (green) ham is a cipher for our age, an antithesis to the jejune, a whirlwind of growing complexity into which we pour our souls and come face to face with the naked question - will we try them? Try them and we may, I say.
Seuss offers us a black and white and green question - do we like them? But this devolves into shades of grey (green), we're crippled with choice, seduced by the rhythm, shocked by the goat.
In the end, my friends, there are only two kinds of people. Those who push the 'like' button on my review of Green Eggs and Ham, and those who suck.