Six months after the publication of my first book and things are going very nicely thank you. I am though, by many counts, old news. The eyes of the blogging community are firmly fixed on the 2012 debutants, with Myke Cole and Saladin Ahmed at fore of the January charge. It’s Christmas every day in blog-world with the permanent excitement of opening new presents, and there are always more waiting under the tree. Sure the favourite toys get played with, but those unopened boxes have a special pull.

I can’t, even for a heartbeat, resent this state of affairs. I rode the newbie wave and benefited hugely. The new kid on the block needs the spotlight, needs that chance to catch people’s attention. And special kudos to the bloggers who try to spread the love and cover some of the releases from smaller houses without a mega-push behind them. It does, however, make me pause to think about the business of discovering new writers and how people think about ‘old’ ones.

I recently contributed to an anthology to help out with Fantasy Faction’s web costs. (I really like the site and hope to be able to continue enjoying it without adverts for skin care products and medical miracles taking up half the screen.) I sent a bunch of short stories for them to select from, and the first reaction was great surprise that they were all so different in style, from each other and from Prince of Thorns. And that kinda brought it home to me. Even people who had high expectations of me expected me to dole out the same goodies time and again. That I could write a good horror tale, or a weird Gaiman-esque yarn, or a literary fiction piece . . . ran contrary to the opinions formed from my single book. Which underscores the sad fact that people who didn’t like Prince of Thorns (and yes, a few such strange beasts exist) will like as not never pick up another Mark Lawrence book because they ‘have me pegged’. It’s not that I can’t surprise them – it’s that I’ll never get a chance to, not with a book that has Mark Lawrence on the cover.

Now as it happens I have had several opportunities to see people read and rate work I’ve written under different names, ignorant of the fact the fiction is from the same pen. And I’ve had 1* on one, 5* on the other, and vice versa depending on the particular tastes of the individuals (and almost never 3* on both!).

So it’s not the bloggers’ spotlight and love affair with the new that is the true reason a writer might have for keeping a collection of masked identities in their writing cupboard, it’s the fact that we’re typecast by our first book. Readers, in the main, like to know what they’re getting. If they want something different they’ll try someone new – if they come to you, they want some more of the reason they liked you.
Posted by Mark Lawrence at 15:32 12 comments:

King of Thorns - fragments, part (i)

Brother Kent
In the red ruin of battle Brother Kent oft looks to have stepped from hell. Though in another life he would have tilled his fields and died abed, mourned by grandchildren. In combat Red Kent possesses a clarity that terrifies and lays waste. In all else he is a man confused by his own contradictions – a killer’s instincts married to a farmer’s soul. Not tall, not broad, but packed solid and quick, wide cheekbones, dark eyes flat with murder, bitten lips, scarred hands, thick-fingered, loyalty and the need to be loyal written through him.
( part (i) in a series of bits & pieces from King of Thorns including 'Brother snippets' and some deleted inserts. To be released with increasing tempo as we head toward August. )
Posted by Mark Lawrence at 00:37 3 comments:

Turning the tables #5 – The Wertzone

If you hated Prince of Thorns you'll hate these...

Every man and his dog's website these days is busy trying to extrapolate your tastes in whatever they happen to sell and propose you buy extra stuff off them in the same vein. Bought a chainsaw? Perhaps you'd like a Friday 13th mask. Bought Justin Bieber's new album? Perhaps you'd like this loop tape of an adenoidal howler monkey we kicked in the nuts. Etc etc. They do it with books on Amazon - if you liked this, you'll love these.

I looked at a random sampling of the people who awarded Prince of Thorns one gleaming star on Goodreads and looked at how prone to 1*ing books they were and who else got the love off them.

And here are the results (15 voters examined). I noted any 1*s they awarded to famous classics that have stood the test of time, or acclaimed SFF.

If you hated Prince of Thorns... you'll hate these! Star runners in the 'also hate' league are Catcher in the Rye, Of Mice and Men, Gormenghast, and To Kill a Mockingbird.... Frankly that's company I can live with!

1) 51 1* ratings from 1250  including
Of Mice and Men, Catcher in the Rye, To Kill A Mocking Bird, Lord of the Flies, Scar Night, Ship of Magic, Good Omens, Fellowship of the Ring

4) 12 from 556:
Of Mice and Men, Lord of the Flies, Catcher in the Rye, To Kill a Mockingbird, The Grapes of Wrath, Gormenghast

5) 24 from 892:
Gormenghast, Night Circus, The Blade Itself, Legend, Infinite Jest, Johnathan Strange & Mr Norrell, The Darkness That Comes Before, The Unbearable Lightness of Being, Xenocide

6) 2 from 64:
Patriotic Gore: Studies in the Literature of the American Civil War

7) 2 from 65:
A Very Short, Fairly Interesting and Reasonably Cheap Book about International Business

15) 200 from 342
Catcher in the Rye, To Kill a Mockingbird, Animal Farm, Gormenghast, Neverwhere, Gardens of the Moon, The Blade Itself, The Lies of Locke Lamora, Lord Fouls Bane, The Warded Man, Magican, The Name of the Wind, Tigana, The Once and Future King, Game of Thrones, The Shining, The Dark Tower, IT, Narnia, The Hunger Games, American Gods, Redwall, Charlie and the Chocolate Factory, Enders Game, The Hobbit, Silence of the Lambs, Lord of the Flies.
Posted by Mark Lawrence at 10:48 16 comments:

The David Gemmell Morningstar Award is now open for votes! This is for 'best debut of 2011' and Prince of Thorns finds itself in august company! To vote all you need to do is click on the link then click on the book you like best.

There are multiple awards coming up, and many of them (like the Hugos) are more prestigious (currently) but this one is close to my heart. You don't need to be a paid up $50 member of something literary, you just need to be able to mouse-click. And while I'm sure Mr Campbell was a great person (I learned about the Campbell award today) ... I've _read_ David Gemmell, many times, and loved his work. He died too soon and this award is a great tribute to him and I'd love to see it go from strength to strength. So this is the one I'm going to talk about and the rest can go hang :)

The two main reasons for assembling this list of lists are:

ii) You're probably here because you liked Prince of Thorns. These reviewers (or in one case, these 20,000+ voters) appear to share your taste in one book, perhaps you will enjoy the other books on their lists. 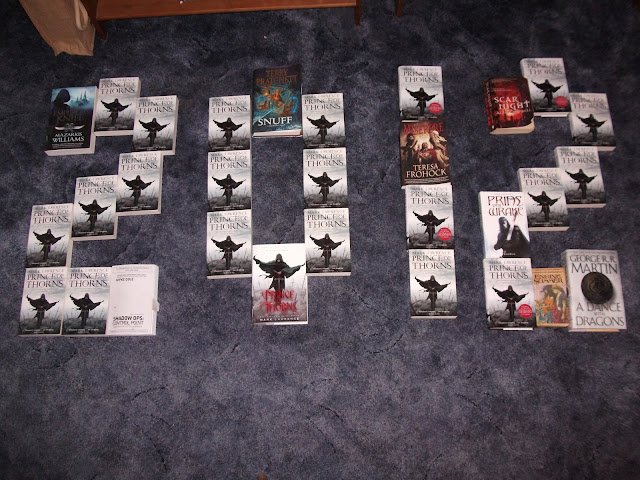