I never like to waste any writing, possibly because I don't have time to revise. I operate on a write-once - move on, principle. This may be why having answered these interview questions for my French publishers I'm posting them here before they get translated and I lose contact with them. (Not that consigning them to the care of 50 million Frenchmen is a waste - but I would like to share them with people I can talk to as well)
<Some of the interview questions seem to have lost a battle with Babelfish...>


- First of all, would you mind introduce yourself to french readers?
Hi French readers! I’m Mark, a fairly regular chap living in the UK. I’m in my mid forties, have four kids, and my day job is as a research scientist. Today I spent working with a French guy getting a computer to recognise objects in radar imagery using some rather advanced algorithms from our collaborators at Oxford university. All good fun. Most of my time out of work is spent looking after my very disabled youngest girl (seven years old). Late at night I write.
- What are your favourite books? The ones which inspired you?
Beyond Hobb and Martin there’s no fantasy author who I would seek out, I just follow recommendations on particular books. Outside fantasy I tend to jump around a lot, but William Golding, John Irving, and Solzhenitsyn I keep going back to. I’ve even been known to try French literature! I’ve read quite a few of Jean-Paul Sartre’s works and some Simone de Beauvoir. And of course I was raised on Goscinny and Uderzo!


- How did you come up with Jorg story?
I just started typing. I don’t plan. The inspiration was Anthony Burgess’ A Clockwork Orange. I wanted to see if I could make a violent and amoral character but manage to attach the reader to his story through his charisma and through the story between the lines.
- Writing the novel from a first person point of view, you were truely in Jorg's mind. How did you manage to enter it? When out, how did you feel?
I don’t think first person is any different to third person. If third person is written well then it can be turned into good first person writing automatically by following the rules of grammar.
His fingers tightened on the old woman's throat, the flesh purpling around them. He felt her struggles weaken.
Becomes:
My fingers tightened on the old woman's throat, the flesh purpling around them. I felt her struggles weaken.
One is not harder to write than the other, but something about the first person makes people think the second is more disturbing.
If you play the trick backwards then what you find in Prince of Thorns is less disturbing that many scenes in George Martin’s work for example, and in very many crime thrillers where murderers are hunted down.
So, to answer the question: I guess I was as much in Jorg’s head as much as any writer is in their character’s head – no it didn’t bother me – and no I don’t think it makes me a bad person!


- Many people praised your novel whom are now your pair. How did you react?
I was pleased. I never wrote expecting to be published. Being an author hasn’t been my lifelong dream, and the whole experience has been as surreal as it has been surprising. To have someone like Robin Hobb, whose work I’ve very much enjoyed, praise my writing is obviously very gratifying. But past being pleased I’m not sure what I’m supposed to do. I’m not the kind to run around the house flapping my arms...
- The Prince of Thorns" also set the cat among the pigeons of Anglo-SaxonFantasy. Did you foresee that fierce a debate when published? How did you live cope with it?

Well as much as I would be happy to set cats among pigeons I’m not really aware of any fierce debate. The vast majority of reaction has been very positive indeed. There are always some people who are unhappy about any work of fiction. I guess I just gave a Gallic shrug! Nothing I’ve encountered as an author has been one tenth as stressing as what I have to cope with every day as the father of a profoundly disabled and life-limited child. If the debate were a hundred times more fierce it wouldn’t bother me at all.
- Are you trying to deliver a message through this trilogy?
No.
- What can you unveil about the other books of The Broken Empire?
I can unveil that I finished the last of the trilogy over a year ago and have moved on to new things. I can say that each book is very different as I’m not interested in repeating myself, and that we get to see Jorg’s progression through life plus a lot of the world he inhabits as he’s a bit of a traveller. And finally I can reveal [spoiler] that as the setting becomes more clear from one book to the next, even the least observant of readers will not fail to notice that technically Jorg is French [/spoiler].
- What are you planning?
I have several projects on the go. The one I’m working on right now is a strange mix of gunslingers and fantasy – first conceived before I’d heard of King’s Dark Tower (which I’ve now read all of) and with only very distant similarities.


- Through and through, could you describe "The Prince of Thorns" in three words?
I could use three words on the title! *Deeper than anticipated* How’s that?
Posted by Mark Lawrence at 15:04 5 comments:

The kindness of others 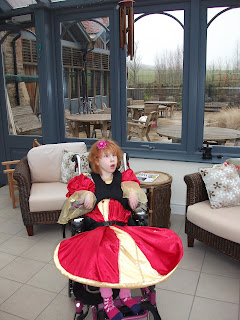 So I’m sat here in the wi-fi hotspot at Charlton Farm Hospice, a converted farmhouse that offers respite for life-limited children, entirely funded by charitable donations.
http://www.chsw.org.uk/page.aspx?pid=594
We get 14 nights a year here. I bring my daughter and get to write whilst she’s looked after by trained staff, and my wife stays home to catch up on the sleep she doesn’t get the other 351 days of the year. It’s wonderful.
Yesterday Celyn (8 years old) got to dress up, go on a wheelchair swing, see some cows, direct the creation of a party hat ... it’s all go.

Today it’s the birthday of another sweet little girl at the hospice. She's three years old today. She’s been on chemotherapy/radiation for much of her life. If you were here watching her play and hearing her parents speak of their hopes for a cure you too would have to turn your face away. Three . . . 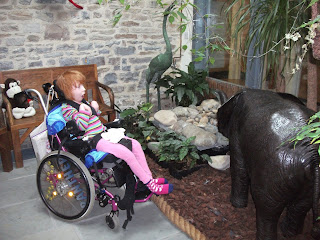 Forgive me for speaking in platitudes but platitudes earned their status by serving so well. Places like Charlton Farm provide a counterpoint to the awfulness you can watch on your TV screen 24/7. Most people will never see them but they exist because of the kindness of others. And I felt liked sharing that. 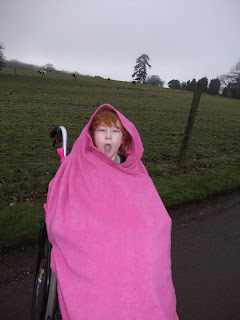 Brother Grumlow
In the long ago, in the gentle days, Brother Grumlow carved wood, worked with saw and chisel. When hard times come carpenters are apt to get nailed to crosses. Grumlow took up the knife and learned to carve men. He looks soft, my brother of the blade, slight in build, light in colour, weak chin, sad eyes, all of him drooping like the moustache that hangs off his lip. Yet he has fast hands and no fear of a sharp edge. Come against him with just a dagger for company and he will cut you a new opinion.
& a non-blurb I wrote for Independent Thinking, a publication that seeks to inform and attract the buyers at independent book shops across the UK and who are already bored of your actual book-blurb:

Readers and reviewers repeatedly identify three things about Prince of Thorns – firstly the power and beauty of its prose, secondly the shocking violence and amoral nature of its protagonist, and thirdly the surprising youth of Prince Jorg. King of Thorns is a progression rather than a formulaic repeat. Prince Jorg is older, his world view develops, and whilst he neither seeks nor attains redemption, he does grow.

King of Thorns is in many ways a more sophisticated book than its predecessor but, whatever its literary merits, it maintains the trilogy’s high energy and murderous pace. As Jorg says, all paths to the throne require that you walk on bodies. Like Prince of Thorns this book is an ungentle one, shot through with blackest humour, and if the reader doesn’t laugh then cry, I’ve not done my job.

This book was not written for a demographic or aimed at meeting any common set of fantasy elements – it’s the story I needed to tell. For me the writing page by page and line by line is as important as the story chapter to chapter. I hope what marks it out is a level of passion and honesty uncommon in the genre.
Posted by Mark Lawrence at 13:31 No comments:

Almost nothing was cut from King of Thorns in editing (quite a few additions). The only real casualties were small fragments from the view points of people in the background/scenery of the story. These were to nestle between chapters and put a human face on a grand conflict. In the end it was felt they distracted from / diluted the main thrust of storytelling. These cuts are among the bits & pieces I'm releasing as we... hurtle... toward August.

This is the first:

The arrow pinned him to the moment, and Sorren fell, knowing that for all his life he and the arrow had been racing toward each other.

He fell. His head bounced once and his helm clattered away. A last breath left in a crimson spray of surprise. Sound faded, bowstrings thrummed into silence, the sky bright and wide, filled everything. He had wanted to be a farmer. He had wanted Milly Turner. The sky narrowed to the gleam of her hair. Narrowed again. Gone.
Posted by Mark Lawrence at 12:35 3 comments: