Here are the top 8 ranked by popularity.

Why did you make Jorg such an anti-hero to the point that, as I've seen, many readers dislike him for what he does (ie: raping women, killing people for no reason at all, etc.)? I'm curious because he's such an interesting character.
Mark Lawrence I'm not sure 'anti-hero' is the right word for Jorg:

Jorg's character was inspired by Alex from Anthony Burgess' 1962 classic, A Clockwork Orange, who does those things. So that's one answer.

The other answer is 'why not'. It's not necessary (for most people) to like a characters in order that they be interested in what happens to them. Additionally is it interesting that we can like a character even when we don't like what that character does.
flag
How do you pronounce Jorg?
Mark Lawrence I pronounce it like it's spelled. Like Bjorn Borg, or The Borg, but with a J. J, for jug, org as in the .org domain.

It was originally Jorge (like George) but Americans pronounce that as Hoor-Hey, so I lost the 'e'.

In the US audio book they say Jorg as I would (because they asked me).
In the UK audio book they say Yorg (they didn't ask me).
flag
Can you tell us a two-sentence horror story?
Mark Lawrence Author asked to write story, for free! FOR FREE!
flag
Was the decision to use "feck" (and its variants) in Prince of Thorns a thin censoring, a demand by publishers, or simply an accent of the road-brothers? Thanks, and I love your books!
Mark Lawrence Accent. There are 15 fecks in the book and 8 fucks. In a book where a bishop gets nails hammered into his head there's no need to censor swearing.
flag
Why does the book mention such a long time?I mean Jorg is 13 years old when the book starts and at the end of the third book he is very old.
Mark Lawrence That's the first time I've seen someone call 20 'very old' :)
flag
Hey Mark, I just started a reread of my favourite series, The Broken Empire. I have finished the Prince of Thorns and started the King of thorns, and this question occurred to me. What do you think Jorg would do, if he was alive and kicking, in the modern world?
Mark Lawrence Hmmm. Some time in a juvenile detention centre followed by a bloody rise through the ranks of organised crime that enables him to buy his way into politics. Then through the judicious application of kneecapping and fake news ... the presidency.
flag
I have to admit that I haven't heard about you before I started reading Prince of Thorns and by the end of first chapter you were my favorite author. But Emperor of Thorns killed me and I have to say that there was a brief period of time where I hated you, but than I realized that you are an amazing author all the same, no matter how you decided to finish the book. That said I have to ask why? Why end it like that?
Mark Lawrence People sometimes imagine stories as arbitrary things that can do whatever they want.

Those of us who have written ... at least successfully, producing stories that others feel compelled to follow ... know otherwise.

When a person who carves wood speaks about their craft they often talk about the animal that is waiting in a particular piece of timber, not created by them, but waiting to be discovered by the chisel and the knife. They are constrained by the grain of the wood, the knots, the dimensions, and by the way the surfaces they start to follow travel through the medium.

All this to say that the end of any book is where the story leads the author. Stories develop a momentum of their own, characters will do one thing and not another. When you wake from a dream you may not like the ending of it. But try to tell yourself a different one ... and it will never quite stick.

From time to time a reader will take the time to variously rage, tell, or inform me of their distress with the way the Broken Empire ends. Quite often they will contact me again days, months, or even years later and say that they finally realized no other ending would do. Those emails are quite nice to get.
flag
Were you worried about making the MC Jorg so very young? He commits all these atrocities so why make him 13? Do you find it takes away from the credibility - the 'believabiltiy' if you will, of the plot? Or was it done in order for a younger audience to be able to relate to him?
Mark Lawrence I wasn't worried, no.

The books weren't written for a young audience.
flag

Posted by Mark Lawrence at 12:22 No comments:

Looking at the Goodreads Choice Awards.

The Goodreads Choice Awards interest me for a variety of reasons, not least that 11 of my novels have made it to the semi-finals of the competition.

Goodreads currently boasts around 90 million members, and around 25% of all my readers rate my books there. In fact for a swath of recent traditionally published fantasy there seems to be a strong correlation between number of sales and number of Goodreads ratings.

With this in mind I looked at all the results since the awards started in 2010 and plotted the breakdown between male and female authors.

The results indicate that in the very popular genres of Young Adult Science Fiction & Fantasy and Paranormal Fantasy female authors have dominated in these awards (and by extension, in sales), averaging 85% & 87% of the top 15 respectively.

Only in the Science Fiction category does there seem to be a consistent majority of male authors, with an average of 33% female authors in the top 15.

Science Fiction does still seem to be a bit of a boy's club and it's unclear from the data whether that is changing.

If there were sufficient numbers of books involved we could look into "Fantasy" and break it down into various sub genres, and I'm sure would find some where one gender was having the majority of success and others where the situation reversed.

It is interesting to note that even after the combination of Fantasy with Paranormal Fantasy there are still more votes (interest/sales) in the YA SFF category (and fewer in the Science Fiction category), except for years when JK Rowling has her hat in the Fantasy ring (and she has a huge YA following).

It is of course dangerous to draw too many conclusions from such analysis, so I merely present the data. And clearly it is scant comfort to know your gender are doing great in one area of writing if the books you write fall into an area where you feel you're swimming against the tide.

Prince of Thorns is 7 years in print!

I now have 9 books on the shelves! 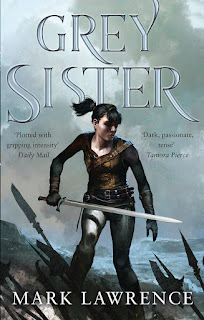 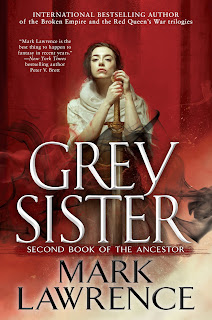 Being a numbers guy as well as a words guy I like to keep track of things and record them for when I'm a doddery old guy looking back at my 'glory' days.

This year my books (or one of them at least) got translated into a 24th language (Georgian!)

On Goodreads Prince of Thorns has passed 70,000 ratings! 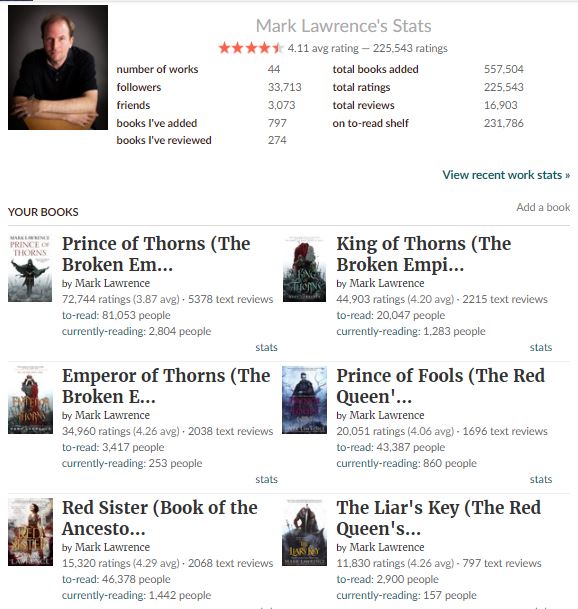 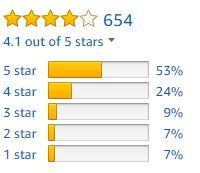 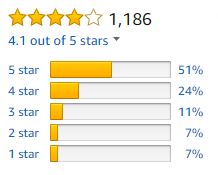 Plus the blog has broken two million views and has very nearly reached 2,500,000!

And I continue to conquer Twitter ... one tiny bit at a time. 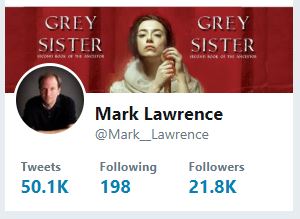