Entries for the graphic novel contest

Read about the competition and FABULOUS PRIZES (tm) here.

This is the first entry. It will win the prize unless 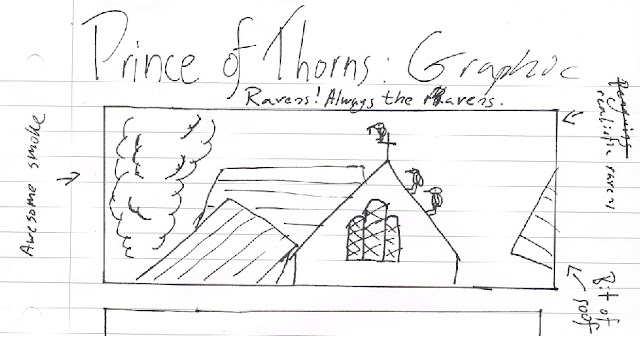 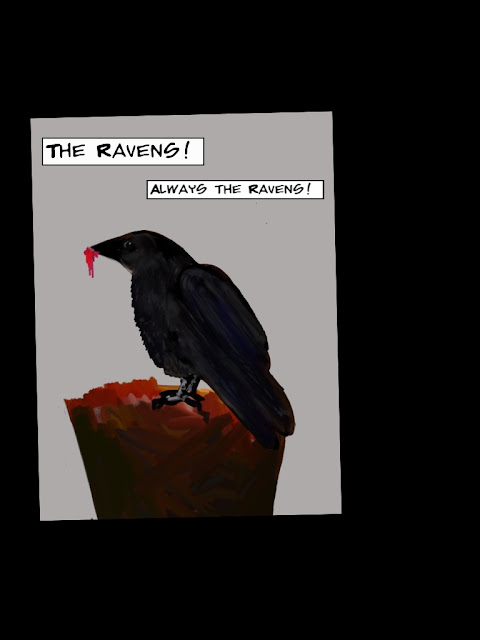 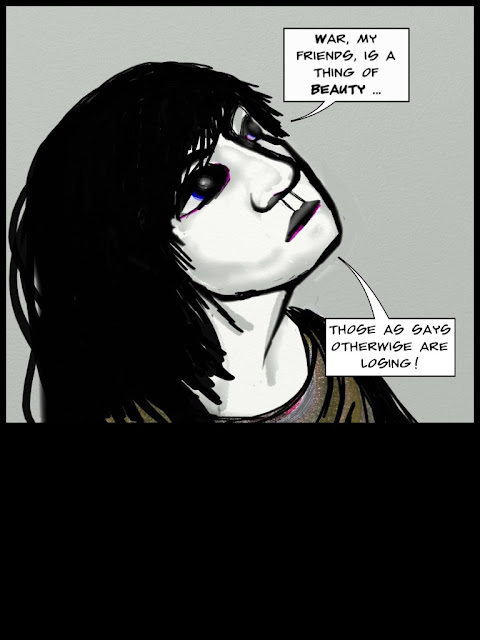 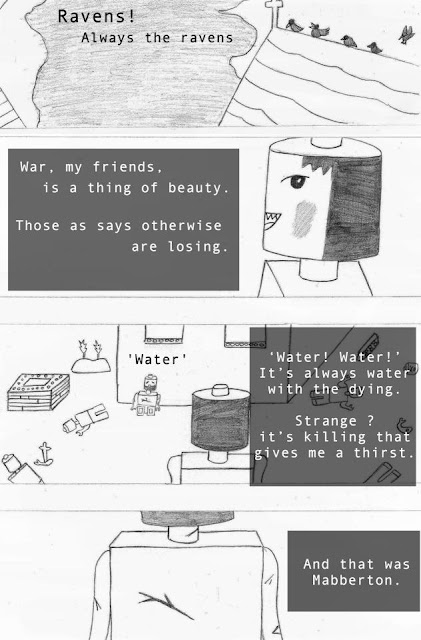 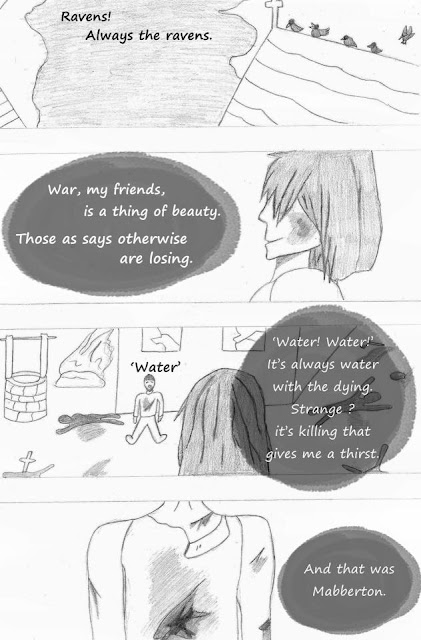 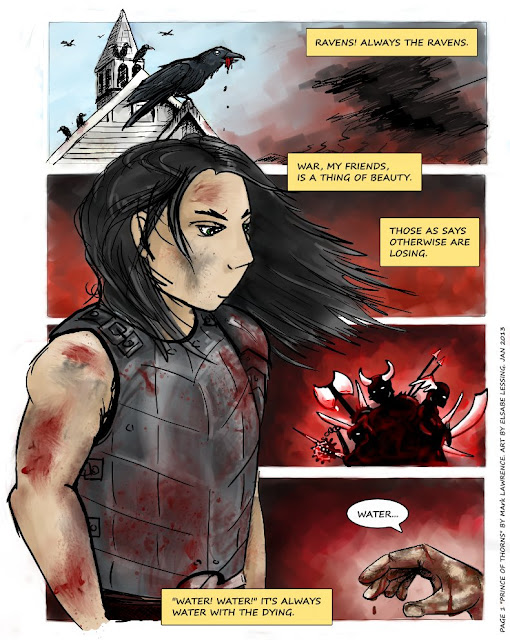 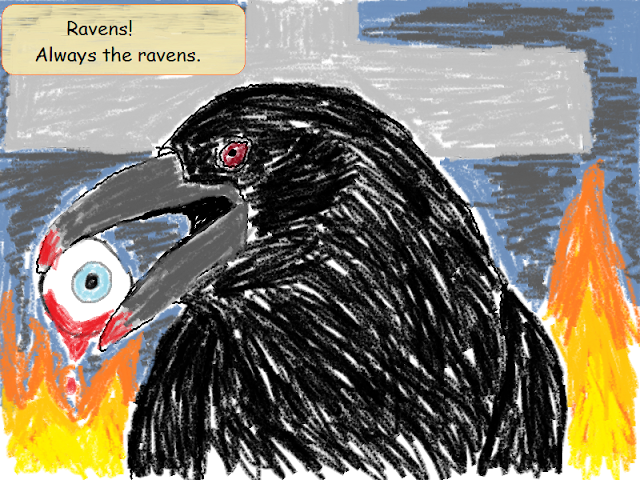 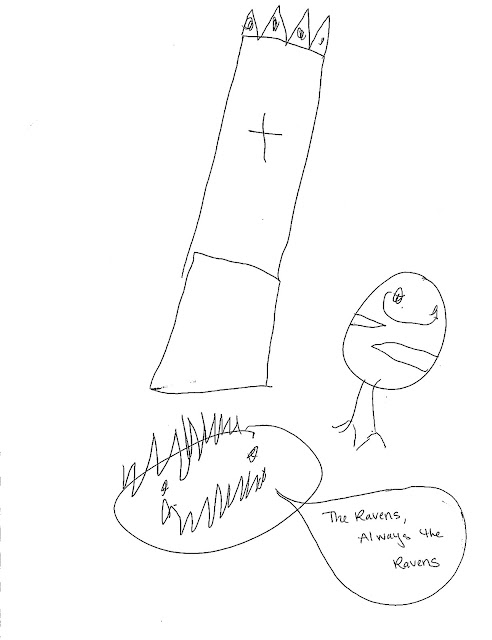 8) Tom (the dimensions compress this one somewhat - even more impressive in full resolution!) 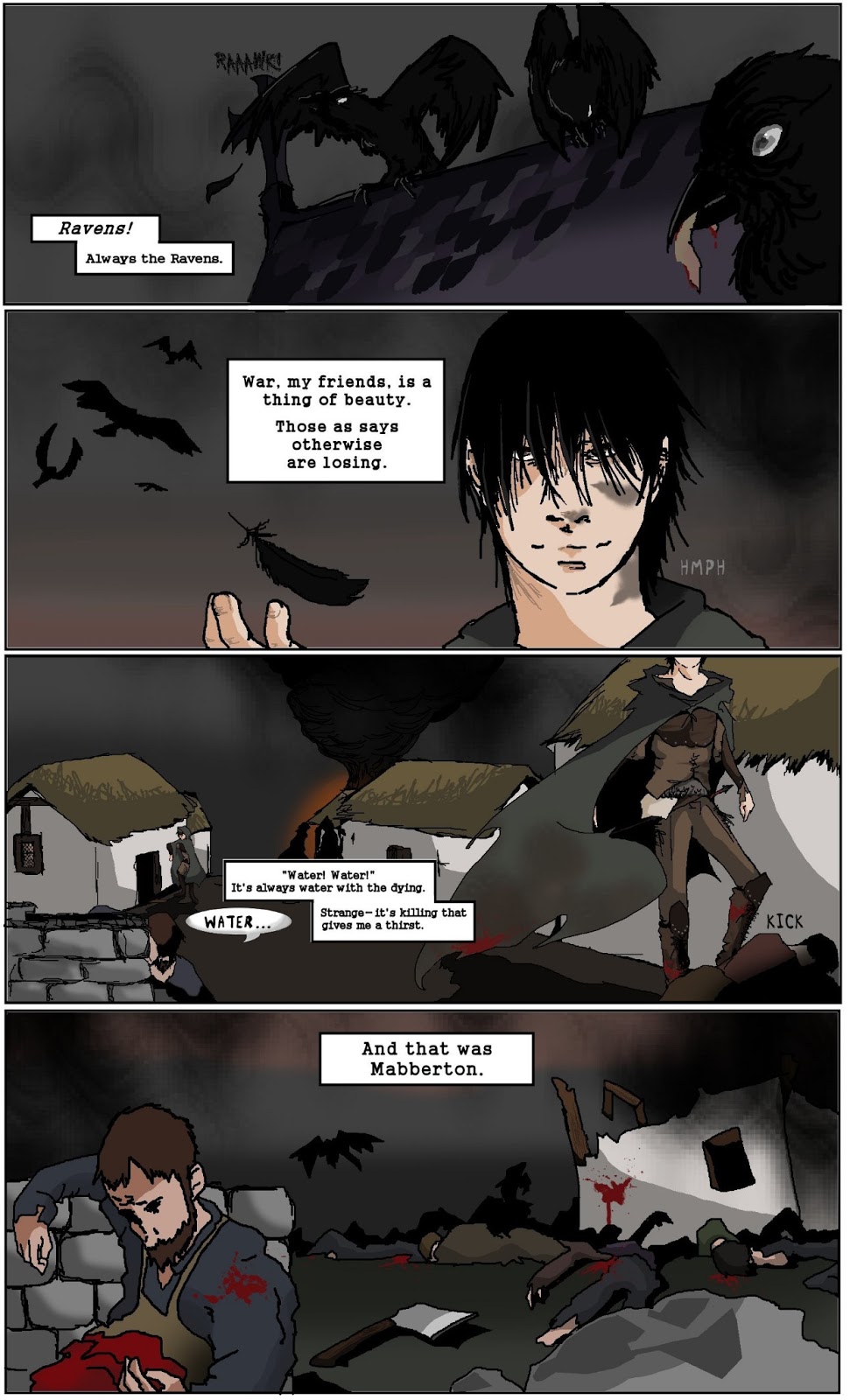 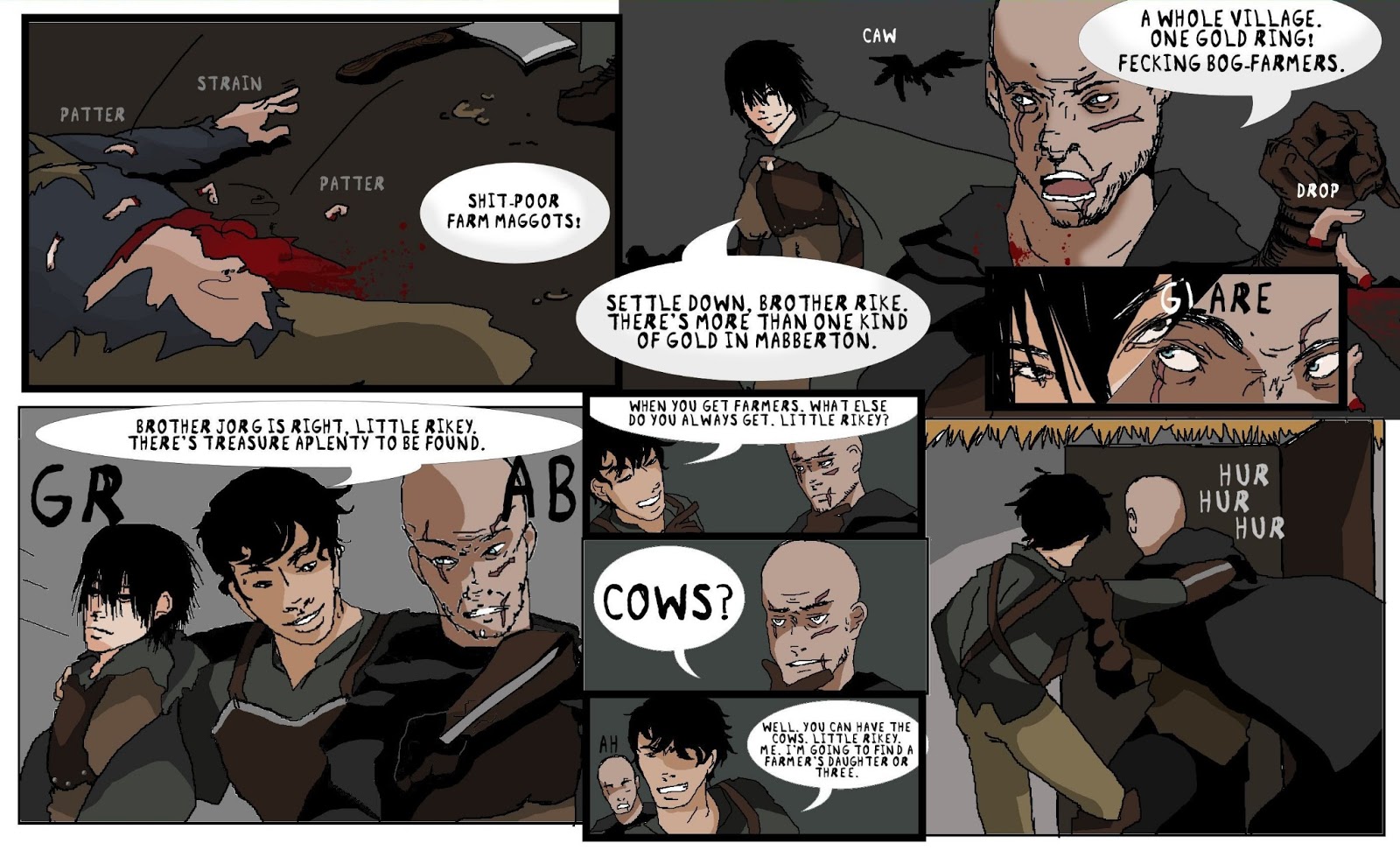 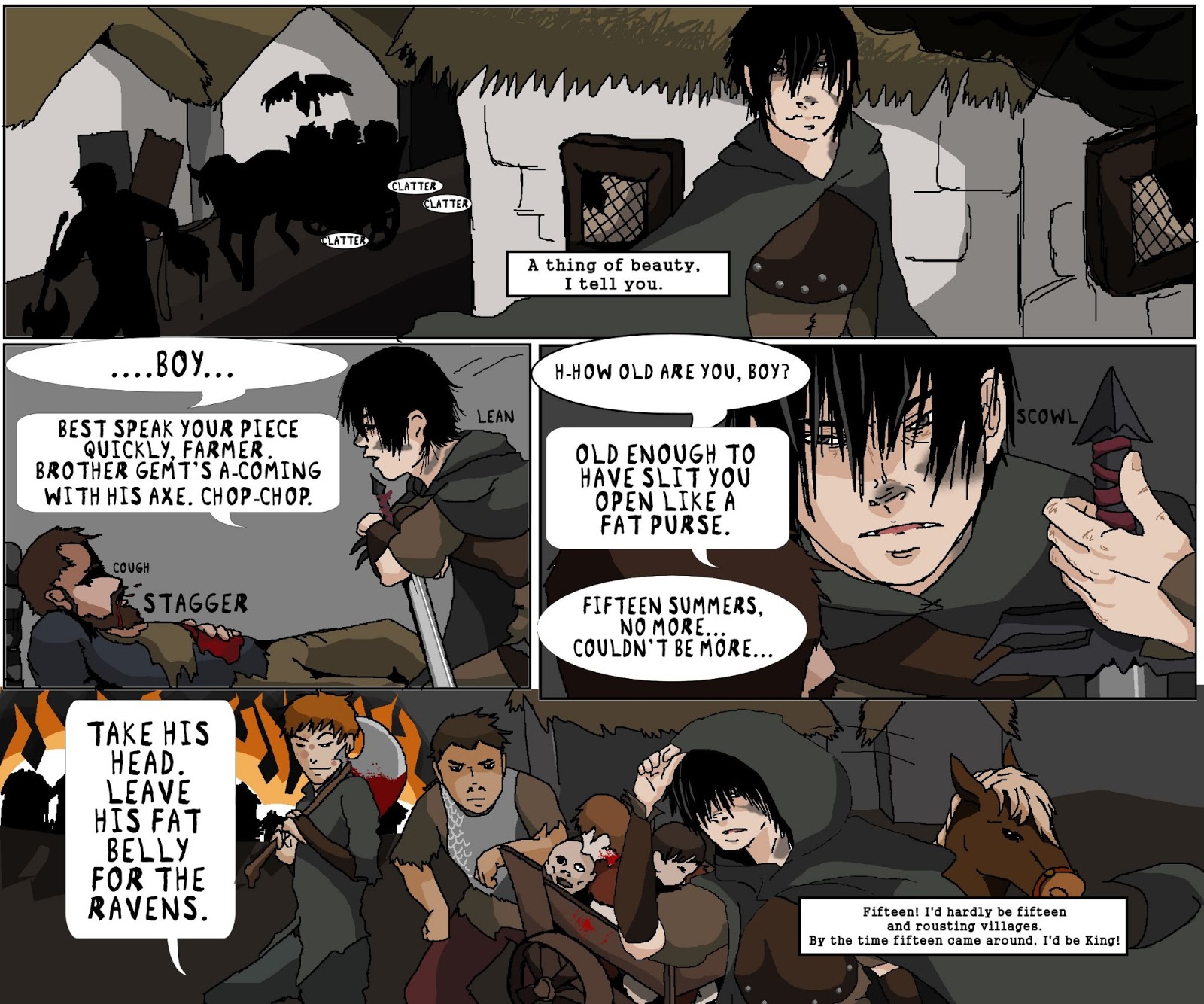 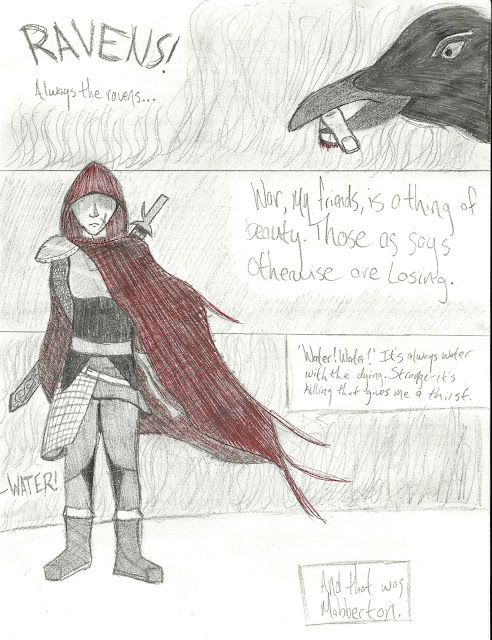 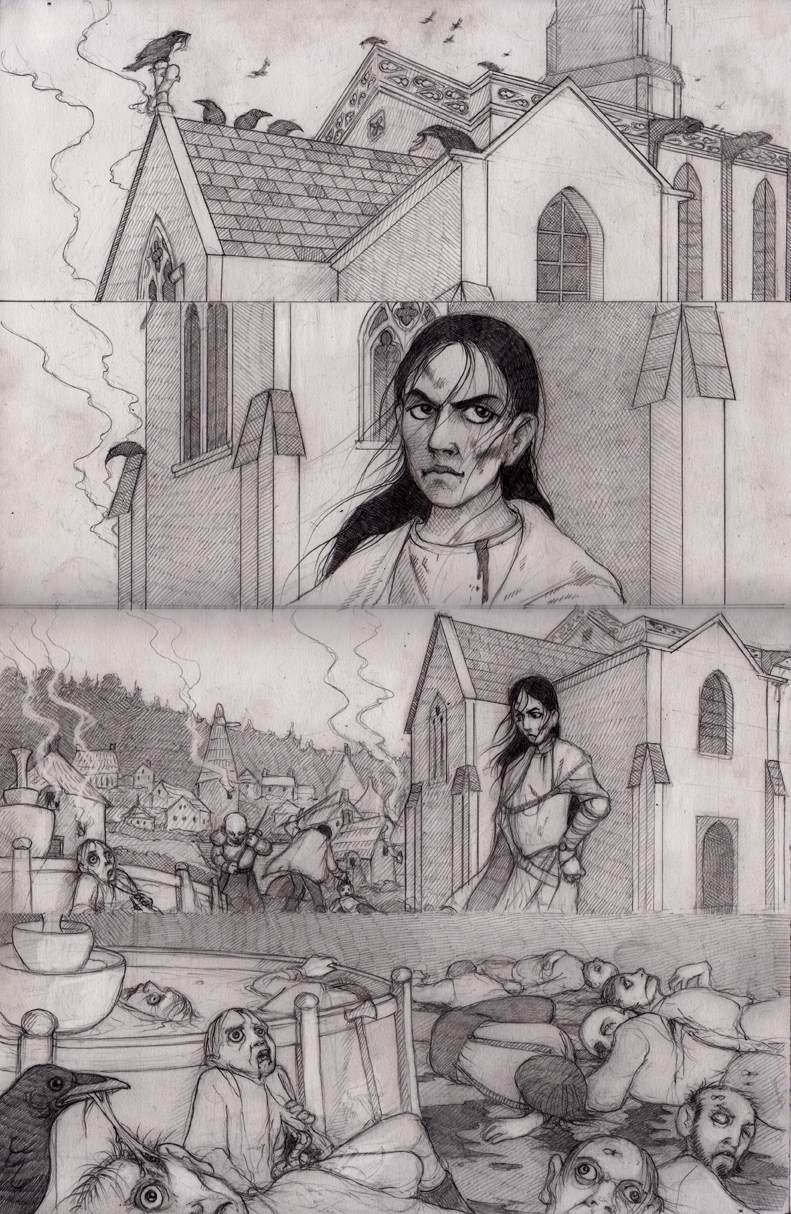 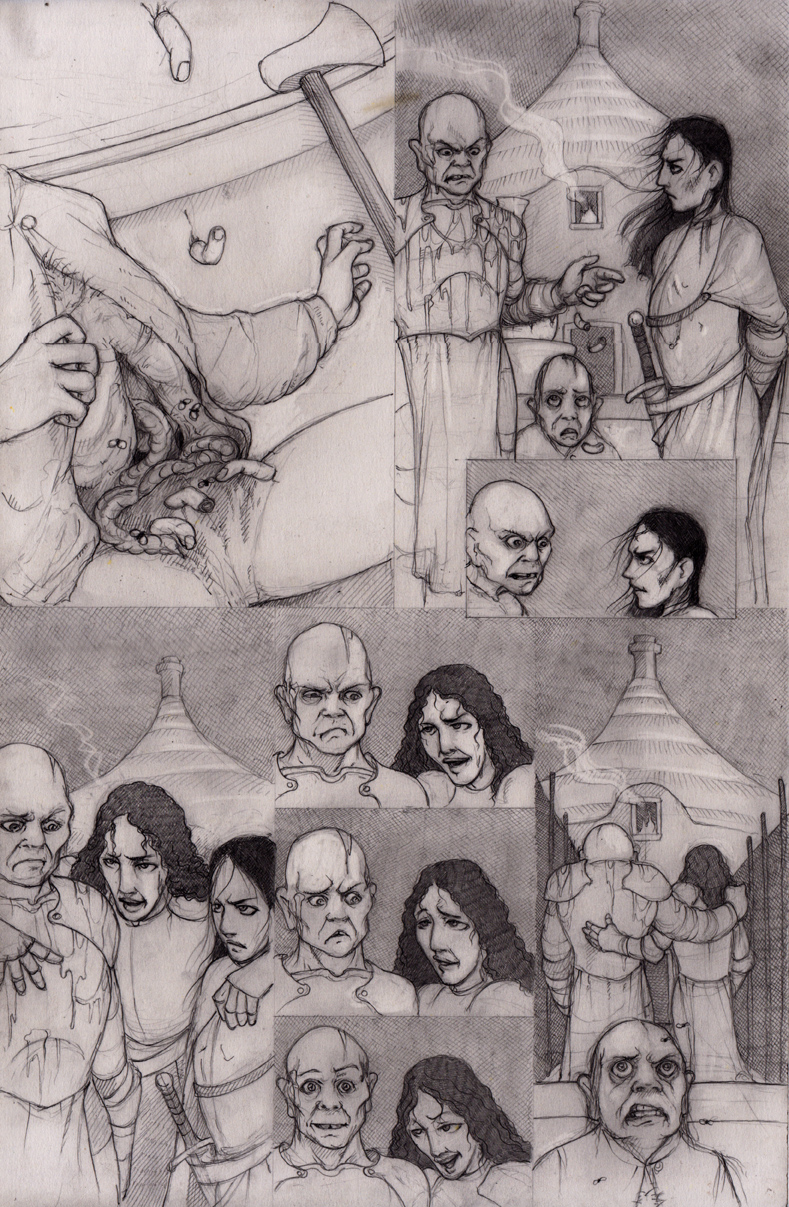 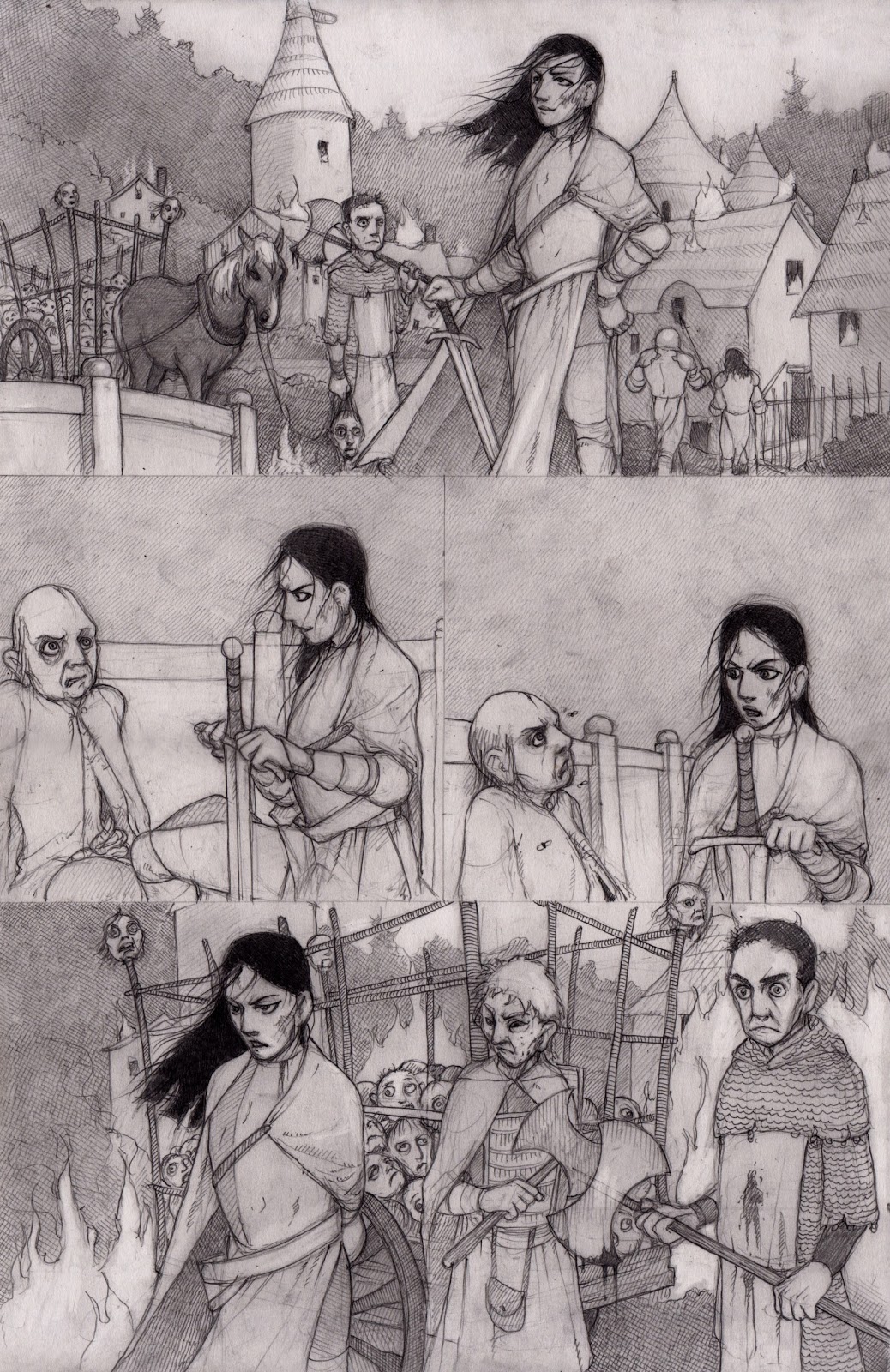 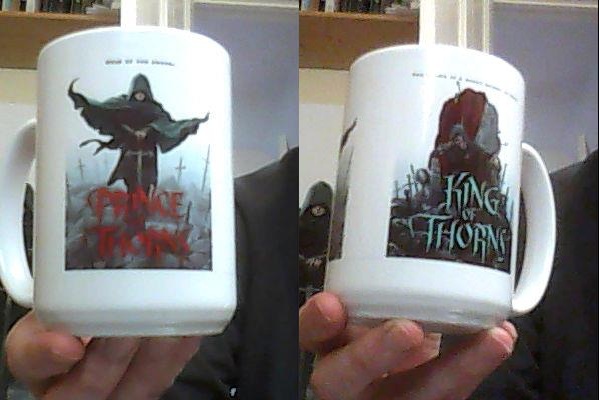 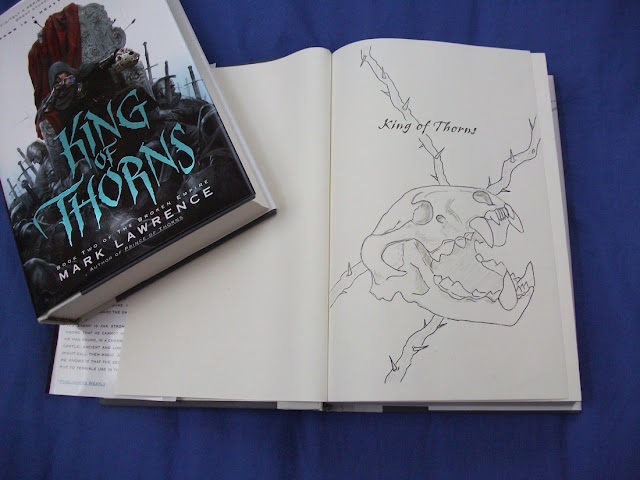 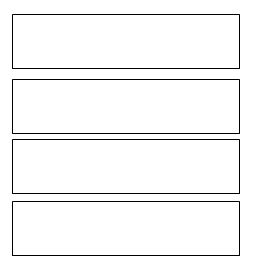 4 stacked panels onto the same scene
Panel 1 – Rooftops, the gables of a church, well-to-do but rustic village, single column of smoke rising. A line of ravens looking down from the church gables. Last of them with torn flesh hanging from beak.
Caption - Ravens! Always the ravens.

Panel 2 – Panning down we now see Jorg’s head – young man, sharp features, long black hair. Smear of soot on cheekbone.
Caption - War, my friends, is a thing of beauty. Those as says otherwise are losing.

Panel 3 – Panning lower – see that Jorg is armoured in a battered platemail breastplate, spattered with gore, see some buildings have flames from windows. See other Brothers looting – brutish men in mixed armour, some old, some huge, some skinny – a rag tag bunch. See simple fountain in town square and the first of the corpses. An injured man calling for water.
Injured man: ‘Water’
Caption – ‘Water! Water!’ It’s always water with the dying. Strange ‒ it’s killing that gives me a thirst.

Panel 4 – Pan to the ground and there’s a sea of corpses, blood running everywhere, propped against fountain base Bovid Tor, older, fatter peasant with a woodax close by, belly opened, guts out.
Caption - And that was Mabberton. 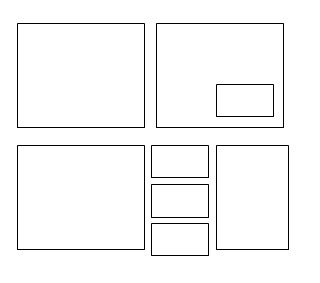 Panel 4- Close up, Makin’s face turned to Rike. Makin eyebrows up, suggestive – Rike surly.
Makin: ‘When you get farmers, what else do you always get, Little Rikey?’

Panel 6- Close up, Makin’s face turned to Rike. Makin grinning – Rike realisation.
Makin: ‘Well, you can have the cows, Little Rikey. Me, I’m going to find a farmer’s daughter or three.’

Panel 7- Makin and Rike, backs to us walking away toward house with broken door. Makin steering with arm across shoulder.
Rike: ‘Hur, hur, hur.’
Page 3 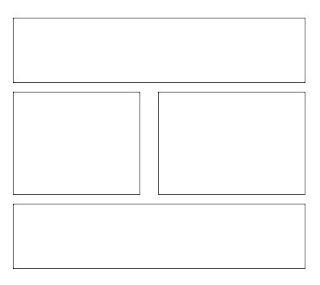 [ENDED] Prince of Thorns price promo for 24 hours on Amazon.com

Well it was fun while it lasted & I've got this to remember it by   :D 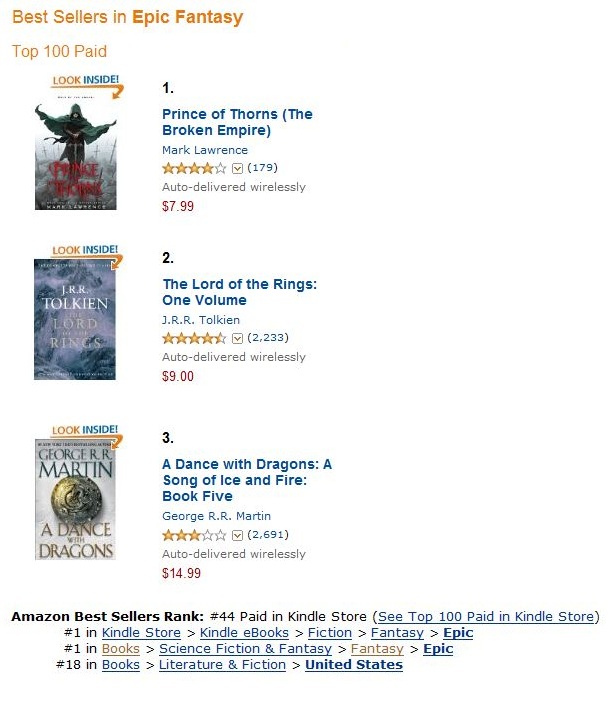 When I'm all washed up and forgotten I'll have it made into a T-shirt and bug the other residents at the old people's home with the story!
Posted by Mark Lawrence at 08:57 3 comments:

So following on from a similar post this time last year I record a year of triumphs and failures. A moment where I let the numbers-guy in me out of his cage before another year confined to only coming out at work.

It's been a pretty good 2012 all told! I get staggeringly little information on sales - it has to pass the dual barriers of my publishers' accounting department and my agent's accounting department. I do however believe I've now sold more than 100,000 books world wide. And that's pretty special!

Possibly the highest point of my writing career can be summed up in these pictures from the UK Amazon's best sellers in Epic fantasy kindle and hardcopy lists. During this price promotion Prince of Thorns was at one point the 27th best selling book in the UK on Amazon - happy face doesn't cover it :D 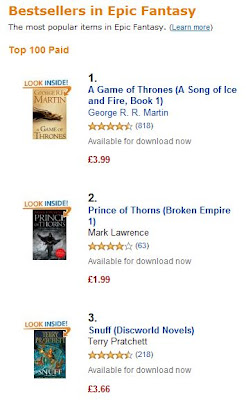 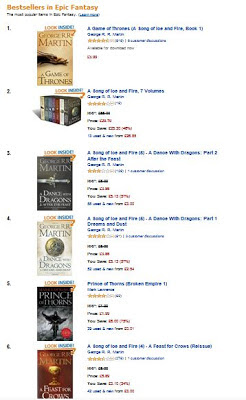 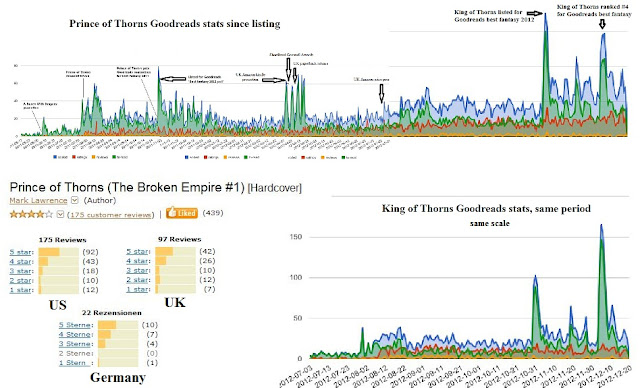 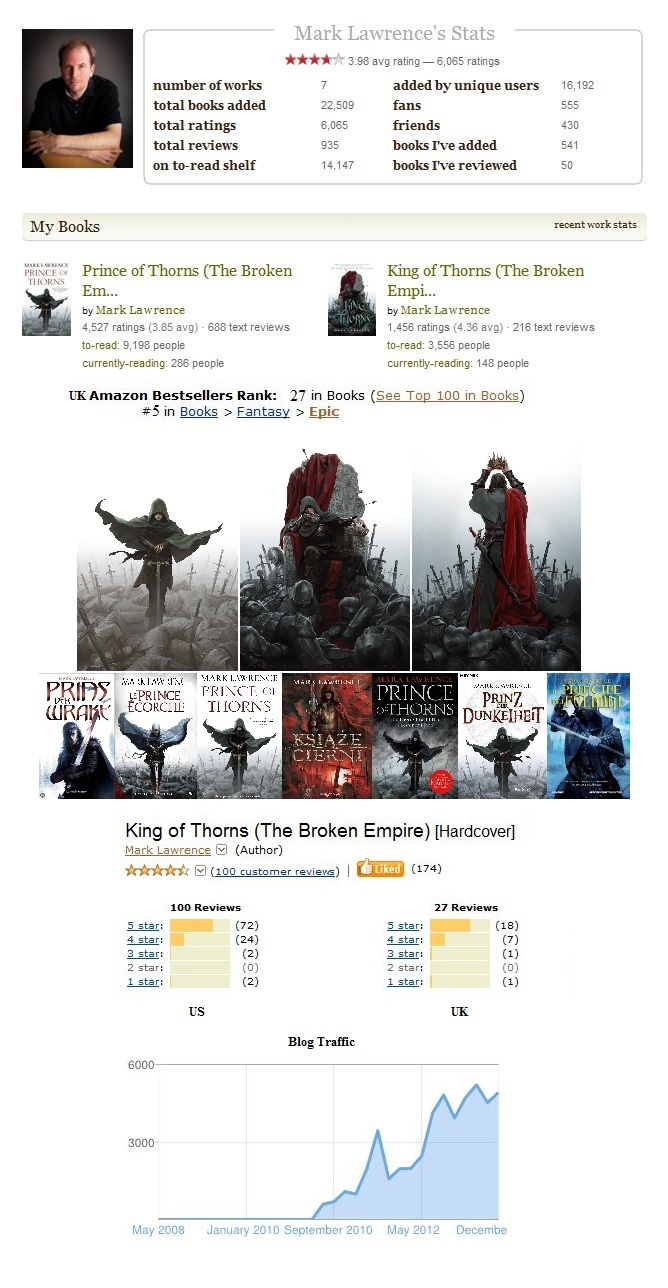 Brandon Sanderson (a popular fantasy author that I've yet to read) gives us:

Sanderson's First Law of Magics: An author's ability to solve conflict with magic is DIRECTLY PROPORTIONAL to how well the reader understands said magic.

And in a recent review of a friend's book someone said:


The lack of explanation of the magic system has me hesitant to continue the series.

Now both of these are opinions. I have a different one:

I've never been aware of reading a book with a well explained magic system. I can't say how I'd enjoy it but my instinct is that if an author started to explain the magic to me as if it were a system born on the pages of a Dungeons and Dragons rule book I would walk away. I quote Sanderson here because I've seen the 'law' repeated in several places. It's entirely possible I would enjoy his work - I don't have time to find out right now - but the sentiment that radiates off the two quotes above sits uneasily with me.

Don't get me wrong - I started playing D&D in 1977 and spent man-years at it. I love magic rules, the inventive combinations that one can concoct in something like Magic The Gathering. I like understanding how things work (I am a scientist after all). However, a novel is not a role-playing game put into words. For me, for magic to be magical, rather than just weird science, it needs mystery. It is an act of writing skill to simultaneously construct the mystery in magic and the faith that it will not be abused. Gandalf's magic didn't come nailed to a system diagram. He wasn't limited to some pre-declared set of rules - two level 1 spells a day - a fireball can only be yay big - or whatever. We trusted Tolkien that along with the mystery there would be an appropriate restraint. Gandalf was never going to say 'sod this let's fly' and magic them into the air, he was never going to turn the balrog into a toad. His power enchanted more than his enemies - it enchanted us - remnants of lost lore and ancient traditions, embodied in and by the man.

If I had to frame a law it might run:

Lawrence's First Law of Magics: An author's ability to solve conflict with magic is DIRECTLY PROPORTIONAL to how well the author gains the reader's trust and draws them into his world.


But both versions miss the point somewhat. The primary reason for including magic in a book (if you're me) is for the magic of it. To give the reader chills - to excite them - to make them wonder. Magic isn't there to solve conflicts - that's what cleverness and bravery and fortune are for. Magic is there to rock.

And if you do happen to wipe out thousands of men with magic and nary a hint of a cog-wheel or subsection to rule 27 paragraph 2 ... sometimes people go with it anyhow. Because they're in there with you, they trust your vision, they're sold.

ii) You're probably here because you liked King of Thorns. These reviewers (or in one case, these 50,000+ voters) appear to share your taste in one book, perhaps you will enjoy the other books on their lists.