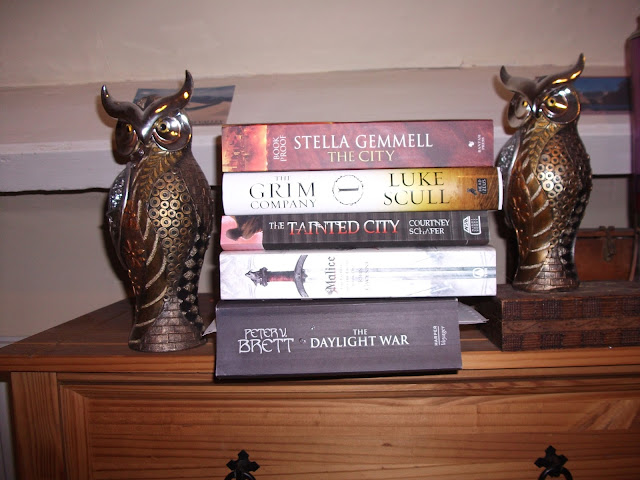 These are the lower foothills of my fantasy TBR. I also have a non-fiction TBR Everest (The History of The World in 100 Objects, Is That A Fish In Your Ear (a book on the joys of translation), A History of Modern Britain etc etc) and a teetering tower of literary fiction and modern classics waiting on me. Oh, and I need to finish reading my youngest child The Neverending Story and then make good on my promise to read her the entirety of the Harry Potter septology...


These are the books I _will_ read next. Daylight War because it would be top of my list even if I'd never met Peter V Brett, Malice because John Gwynne had an ARC sent my way and he's a good guy and I feel guilty about being pulled away from it so many times by other commitments. Tainted City because I really liked The Whitefire Crossing and Courtney Schafer kindly sent me (& my wife (big fan)) a copy. The Grim Company because Luke Scull's publishers sent me the hardback and Luke seems cool. The City because the publishers sent me an ARC and I feel I owe David Gemmell's memory the courtesy of trying his widow's book.

I read _very_ slowly, slipping it in between a hundred other things. Which is exactly how I DON'T want people to read my own work :/

Anyhow - that's the pile and it would surprise me if I get through it before the summer. Add to that the fact I want to re-read some old favourites and maybe try Dan Polansky's 2nd book and you'll see why I'm not the go to guy for a blurb or a good investment of your ARC!
Posted by Mark Lawrence at 04:08 11 comments:

So this blog-post was occasioned by noticing the fantastification of Jorg's sword on my Prince of Thorns covers (UK/US (left), France/Spain (middle), Poland (right)) 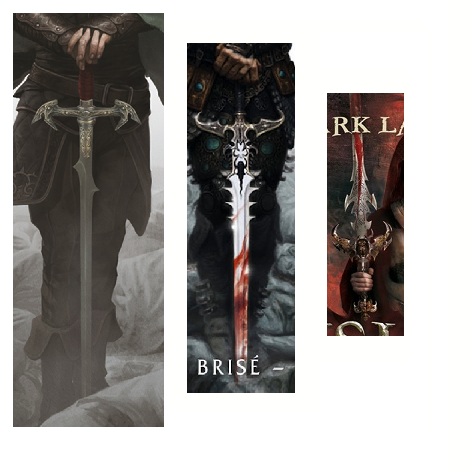 I did find a good selection through other means:

All of which set me thinking that the form in the top left corner (and simple variants of it) represent an evolution over many centuries of a device upon which the user's life often depends. This evolution delivered the most optimal form that could be manufactured - and whilst it's possible there are better designs waiting to be found... I'm pretty sure they don't include a bunch of fancy serrations.

I'm torn on this one, because I do like 'pretty swords' but my enjoyment of them is hampered by the knowledge that they are silly...

Don't even get me started on polearms...

Got any better examples?
Posted by Mark Lawrence at 06:03 13 comments:

First off the obligatory but heartfelt thanks for all the effort you guys put into this, and there were some really outstanding pieces of work there.

I canvassed opinions on twitter and facebook as well as in the comments on the entry page.


I agree with the result though entry #5 by Elsabe got less love than it deserved and was certainly one of my favourites.

To Tom go the spoils. A 'thorned mug' will be winging his way and I'll send his work on to Ace with my note wondering if they've reached any decisions on whether to do a Prince of Thorns graphic novel yet. 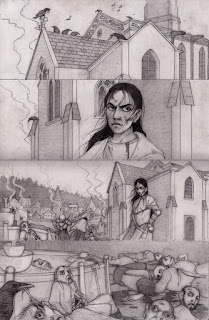 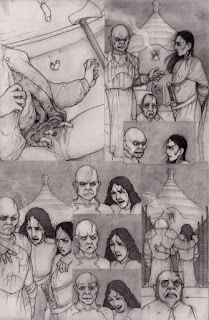 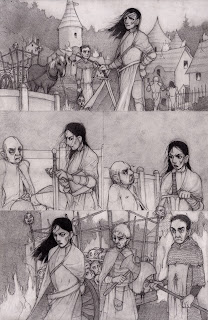 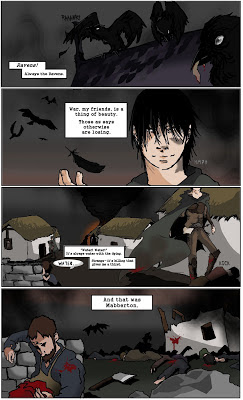 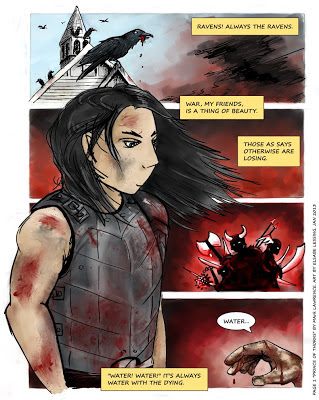 Posted by Mark Lawrence at 02:23 No comments:

There are a lot of books I want to read but haven't yet found the time for. One such is The Written by Ben Galley, interviewed on this very blog a while back. I will be honest and admit to knowing rather little about the book and having been drawn to it (forgive the pun) by the stunning cover artwork.

Anyhow, since my recent agitations regarding a Prince of Thorns graphic novel (results tomorrow) - it seemed 'on topic' to give the floor to Ben so he can tell us about his kick-starter aimed at financing a graphic novel for The Written.

To whet your appetite here's how the artist signed to the project envisaged Jorg: 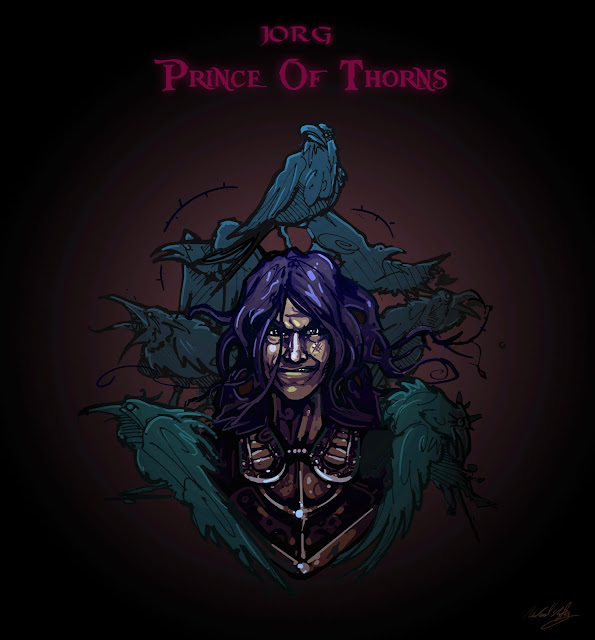 It sure is nerve-wracking, entrusting the future of your project to other people, especially when that future depends on those people giving you money. That’s exactly what I’ve done.

Little over 25 days ago, I launched a Kickstarter project to raise £5000. Why? Because I want to turn my fantasy novel – The Written, book 1 of the Emaneska Series, into a fully-fledged graphic novel. It isn’t just a “oh wouldn’t that be nice” sort of thing. It’s always been a dream of mine, to see my words as artwork, but it’s a dream I can’t achieve without a spot of financial help.

For those of you not familiar with the concept of crowd-sourcing, or in this case crowd-funding, it’s a curious beast. It brings together communities of like minds and shared goals, using many people to achieve something singular, be it funding a project like mine, graphic design, making a film, creating art, albums, books, or doing something as thoroughly epic as crowd-sourcing an entire choir via the internet. Yes, that’s happened. Crowd-sourcing is a symbiotic affair. Tasks and goals, all shared for mutual benefit.

Crowd-funding is the same idea, except people contribute their hard-earned cash instead of their skills or efforts. You’d hardly think it was a popular notion, in a financial climate like today’s, but lo and behold, it is! Platforms like Kickstarter, Indiegogo, and Flattr are doing very well for themselves. They’ve helped all sorts of creatives and dreamers turn their projects into realities. Projects like singing tesla coils.

As far as I’m concerned, crowd-funding is brilliant. I’m a big fan of anything crowd-related. The Written’s cover was crowd-sourced via community of designers. I even found Mike, the esteemed artist for my graphic novel, on PeoplePerHour.com, a community that helps people connect with professionals. It’s only fitting that I crowd-fund the novel itself.

Kickstarter allows me to offer rewards in return for pledges, and I’ve made them mighty rewarding indeed. Aside from signed copies, eBooks, copies of the app (yup, we’ll be making an enhanced eBook app with the £5000 as well), merch, snazzy keyrings, and the usual stuff you might expect, I’m also offering the chance to be in the graphic novel itself. Make your pledge, send in a picture of yourself, and bam, you’ll be in the artwork. What a reward, when you consider my graphic novel will be released to a global audience. Now that’s what I call symbiotic. Crowd-funding makes you as much a part of the project as I am.

Power to the people. That should be the motto of crowd-sourcing, if there ever was one.

Kickstarter is all or nothing. If you don’t reach my target, all pledges are refunded, and the project fails. I’m currently at £4000, with only £1000 to go. If you’d like to help me reach my target by the 2nd of March, and make my graphic novel a reality, then have a look at the link below. There’s plenty of artwork to peruse, and more information about where the £5000 will be going. Or, if you don’t feel like pledging, please do help me spread the word. Any tweets, likes, shares, emails, and carrier pigeons are more than appreciated.

This is what I sent to Voyager for the Emperor of Thorns map. 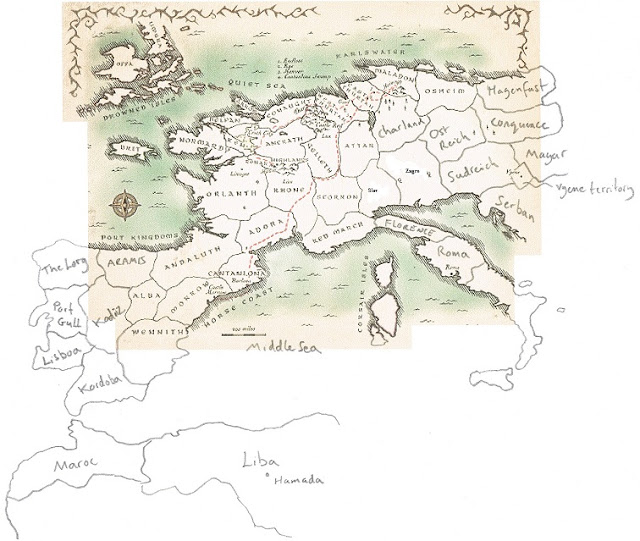