So I'm interviewing Michael R Underwood because he donated money to a children's charity and got his book, Geekomancy, a place in my Million Dollar Bookshop. His new book, Attack the Geek, came out yesterday! 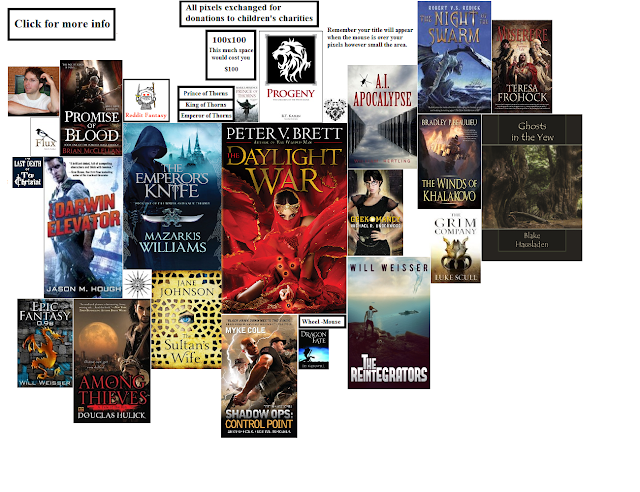 Clerks meets Buffy the Vampire Slayer – I understood half of that. For my sins I have watched (with my wife) most of Buffy the Vampire slayer and a sizable part of Angel. Buffy succeeded in somehow blending quite cheesy tongue-in-cheek fantasy with heart-felt and intense moments that allowed the audience to buy into it. For me the serious (and well acted) undercurrents held the thing together. Where does Geekomancy lie on the serious-to-silly spectrum?

MRU: Geekomancy is closer to Buffy than Angel in tone – the central concept (geek magic!) is, to many, inherently ridiculous, and I try to embrace that rather than shy away from it. But even with a strong comedic bent, the books do tackle some serious issues – suicide, sexism, pursuing dreams in the face of repeated failure. Buffy the Vampire Slayer was a big influence on me as a teen, and so it’s not surprising that I go back to it in terms of structure and tone.

Knights in cardboard armour, werewolves in rubber costumes – but with real power. It sounds intriguing – with various aspects to it, the wish fulfilment of role-players, the notion of great magics being hidden in plain sight, clothed in every day aspects, the power of collective belief investing the commonplace with unexpected enchantment... to what extent are you a partaker in, as opposed to an observer of, the geek sub-culture? Ever wielded a foam sword?

MRU: I’m a life-long geek. When I make references to geek subcultures in the Ree Reyes series, they come from a place of love and affinity. I have wielded a foam sword, though I’m more partial to steel training blades, both rapiers and longswords. I spent countless hours as a teenager and college student at my local game store, first as a regular and then as an employee.

Growing up, I played tabletop RPGs, collectible card games, miniatures games, and more. I participated in a long-running Live-Action Role-Playing Game in college, and continue to play video games and strategy games when I can. And I’ve loved SF/F media (TV, comics, movies) since I was a kid. These days, my geek activities are somewhat limited due to scheduling demands (I work a full-time day job in addition to my writing), but I try to keep abreast of what’s going on in the geekverse.

MRU: I think there’s definitely a risk to meta-fiction that it can become inaccessible. But I see it more as a specialized conversation – within any community, there will be conversations that start from an assumption of a lot of shared knowledge/experience, and the Ree Reyes series is that kind of work within the Urban Fantasy and geek communities. Series like Jim C. Hines’ Magic Ex Libris or the comic Unwritten (Mike Carey and Peter Gross) are also digging into the history of SF/F fan culture, mostly on the literary side, and I think that we’re likely to see a bit more of this kind of work, since geek cultures have become so big and so mainstream (given the dominance of superhero films, TV shows like The Big Bang Theory, King of the Nerds, etc.)

And that’s not even getting into the vastness of the fan-fiction world, where fan work interacts with books, movies, etc., creating alternative readings and contrasting possibilities. Before the advent of intellectual property laws, this kind of meta-fiction was incredibly common, it’s just become far more complicated now with the legal structures applied to protect both creator’s and company’s rights.

Not all art is for all people. Creating for a niche community does tend to limit one’s audience, which can limit the work’s commercial prospects. But I have plenty to say about geek culture, and so I hope that readers will continue to come with me as I investigate the cool, weird world of fandom through the Ree Reyes series. 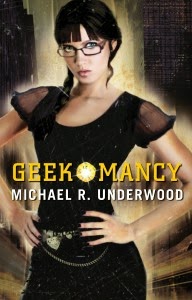 When a book rests on so many pop culture references is it hard to know how far to geek? Obviously the more obscure the reference that someone gets the happier they are – but if you have to be a seventh dan black belt geek to get the references then your demographic shrinks considerably. I mean... I didn’t even get the ‘Clerks’ thing in the blurb... and of course it’s generational too. The pop culture references that work for someone who’s 18 may have only a small overlap with those that work for someone in their 40s (like me). Painful choices? Or just go with your gut?

MRU: The first framing device for deciding what references to make is the character of Ree herself. Ree doesn’t make references she wouldn’t make, so the work is definitely generational to an extent. Ree’s much more likely to make a comment about the Chris Claremont era of X-Men than she is to make a joke about a mid 1950-s Batman comic. More of her references come from works that were readily available in her youth. Not by happenstance, Ree is approximately my age, so I’m able to bring over the majority of my own knowledge, and draw Ree’s references from what I personally know. This also means I don’t often have to go out and research new properties/stories to write the character (though I have done so, and those produced some of the cooler bits – the new BBC Sherlock for Geekomancy and Sunset Boulevard for Celebromancy).

I try to make the majority of the references more accessible, based on what I see in the community, so that a larger percentage of the readers will be likely to get the reference. In-jokes are great if they’re recognized, but definitely can be off-putting if they’re too obscure. I definitely try to sprinkle in a little bit of Deep Geekdom as Easter Eggs to readers whose experiences overlap with my own, since the more obscure the reference, the more fun it is, for me, when you do get the joke.

I’ve had reviews that say that the references were too surface, and others that say everything was too obscure. There’s no way to write this kind of humor and references and satisfy everyone, since everyone has a different range of experiences and fandoms. I’m just hoping to cast a wide enough net to entertain far more readers than I turn off.

I’ve only read one urban fantasy book ... The Man with the Golden Torc by Simon R Green quite a few years ago. What’s hot in the genre these days? What do you recommend fantasy-wise?

MRU: The most common style of urban fantasy is single-POV female lead with strong romance elements. The Urban Fantasy and Paranormal Romance Genres have a very porous border between them right now, which means that contemporary fantasy novels that don’t resemble that mold at all can get a bit lost between the cracks.

One of my favorite UF series right now is the Miriam Black series by Chuck Wendig. They’re grity, crass, and Miriam’s voice is so sharp it could cut a monofilament wire. Chuck’s been making waves, and Blackbirds, the first Miriam Black book, is a great place to dive into his work. (disclaimer – I work at Angry Robot Books, which publishes the Miriam Black series. Understandably, I’m biased).

I’d also definitely recommend Seanan McGuire’s InCryptid series, about a family of Cryptozoologists who try to maintain peace between humanity and Cryptids. Punchy, funny, with strong romantic elements. That one’s only three books in, so it’s easier to get caught up. Discount Armageddon is the first book in that series.

What’s next for MRU? I see you’ve got a Celebromancy book out? Perhaps Fantasy Conventionomancy? Is there nothing you can’t append –omancy to?

MRU: There are two Ree Reyes books out now, Geekomancy and Celebromancy. I have a novella in the Ree Reyes series out on April 7th called Attack the Geek, which is set after Celebromancy. Later this year, I have two novels coming out from different series: an epic fantasy called Shield and Crocus (June 10th) and an urban fantasy called The Younger Gods (December 15th).

I’m currently outlining Hexomancy, the third Ree Reyes novel. And I definitely want to set a Ree Reyes book at a convention, but that may have to wait for Book 4. I’m hoping to have enough fun and snappy –Mancy titles to last the whole series, which I’m currently imagining at about 8 books.

Thanks so much for having me over for this interview, and best of luck with your release for Prince of Fools later this year! 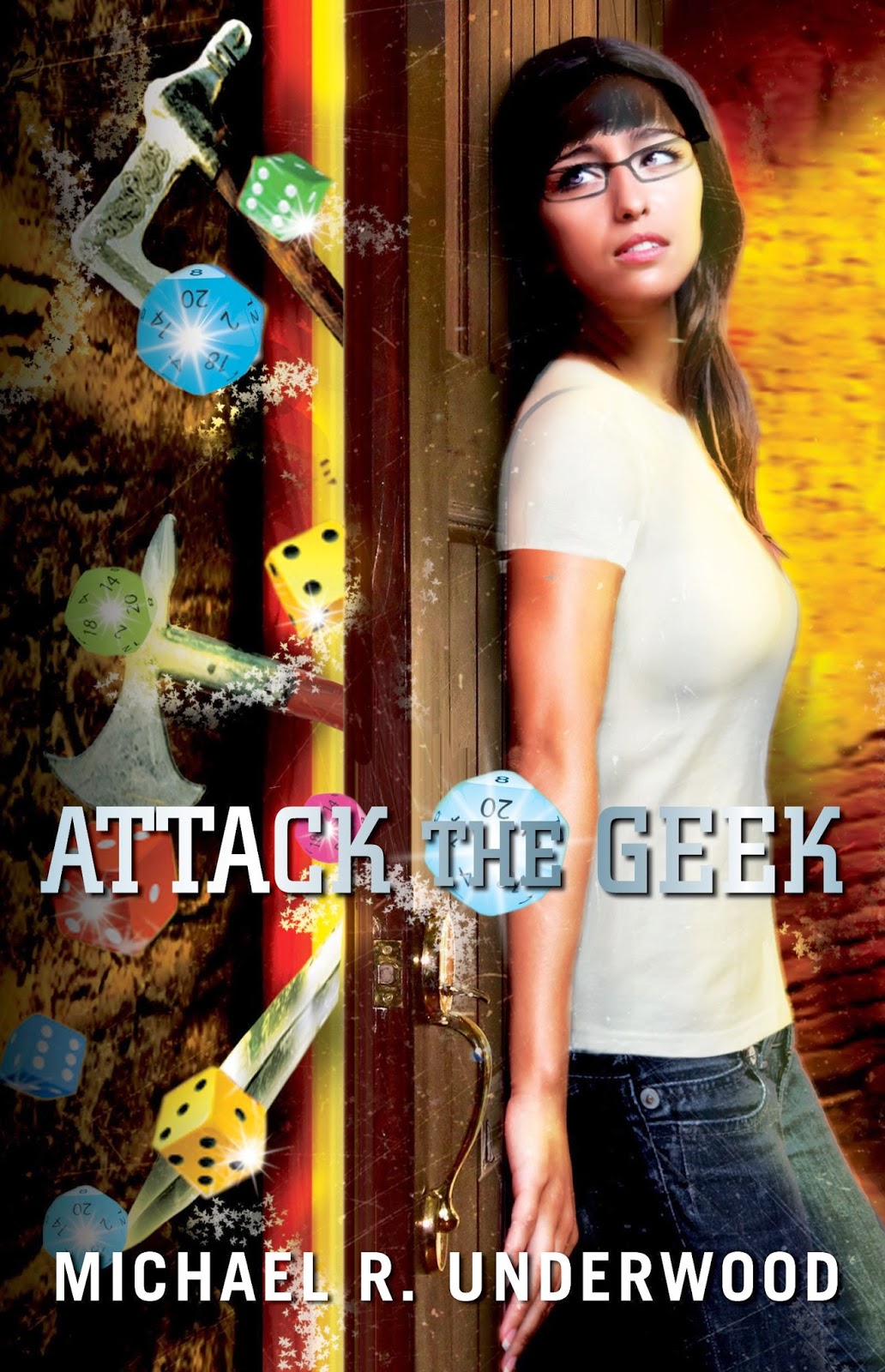 A side quest novella in the bestselling Geekomancy urban fantasy series--when D&D style adventures go from the tabletop to real life, look out!Ree Reyes, urban fantasy heroine of Geekomancy, is working her regular barista/drink-slinger shift at Grognard's when it all goes wrong. Everything.As with Geekomancy (pop culture magic!) and its sequel Celebromancy (celebrity magic!), Attack of the Geek is perfect for anyone who wants to visit a world "where all the books and shows and movies and games [that you] love are a source of power, not only in psychological terms, but in practical, villain-pounding ones" (Marie Brennan, award-winning author of A Natural History of Dragons).