Maybe some authors don't look at their reviews. A larger number might say they don't. Then there are the rest of them who watch them like a hawk thing that's interested in numbers.

Prince of Fools has been out 1 month today (US release), and seems to have been well received.

Here's the breakdown of reviews on Amazon UK

On Goodreads the book's reached nearly 900 ratings in its first month. Prince of Thorns took 5 months to reach 700 ratings! Though the site did have fewer members back in 2011.

This is the breakdown of ratings on Goodreads. Interestingly 10 of the 11 1* appear to be from bot accounts, one of them delivered almost a year ago and the majority before release. 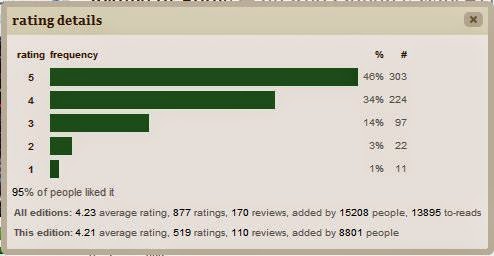 And here's the ratings breakdown on Amazon US.

And of course behind these charts are hundreds of opinions condensed into reviews, for which I'm very grateful.