What do Goodreads ratings say about sales?

I have long maintained from my own data that there is a pretty close relationship between the number of Goodreads ratings a book has and its total sales. PROVIDING that the books are of a similar age and the same genre.

Others have disputed me. So I've been out to gather data.

The scatter-plot below is 'number of Goodreads ratings'  along the bottom and 'sales in English' along the side. 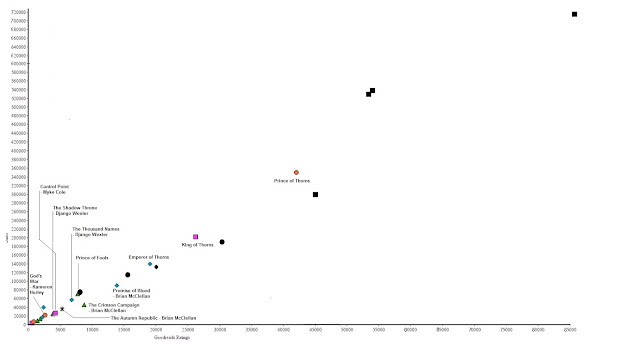 
They are all for fantasy books.

The ratings to sales ratio is pretty stable. If you multiple the number of Goodreads ratings by 7.7 you come pretty close to the number of books sold in English (all formats).

About half of the authors I invited to supply their data decided not to. So this graph may change for the higher numbers. Perhaps if a book breaks out of the genre sales bin it finds a demographic less (or more) likely to rate on Goodreads.

One noticeable outlier (blue diamond in the lower section) has the possible explanation (suggested by the author) that it sold a lot of very cheap e-copies that may be sitting on Kindles waiting to be read. Books on special offer are sometimes snapped up and saved for later. Also, most of his sales were in the UK. Perhaps the British use Goodreads less.


So there you have it. Some evidence that when the book is traditionally published, out for a year or more, and has a decent number of ratings (say several hundred to make the effects of any manipulation insignificant) you appear to be able to guestimate sales pretty well!

This will of course vary from genre to genre: with the likelihood of the demographic to rate on Goodreads). And with time: books published before Goodreads, or when Goodreads was smaller, will be under-represented by ratings.

Although the ratio will change with genre and age it seems very likely that if you take two books from the same genre and the same period that if one has twice as many ratings as the other it will also have twice as many sales and that that prediction will be pretty accurate.


The annotated points in easier to read form.
(click for details) 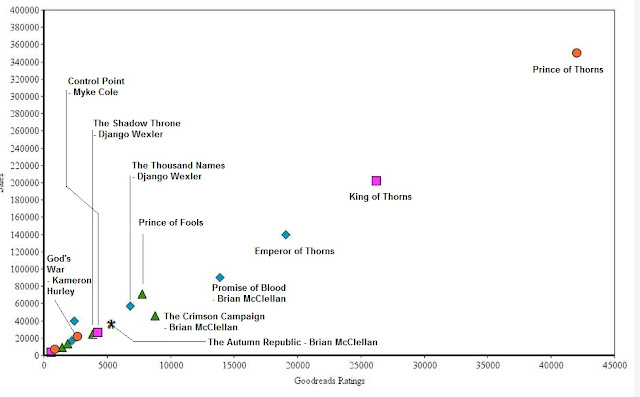 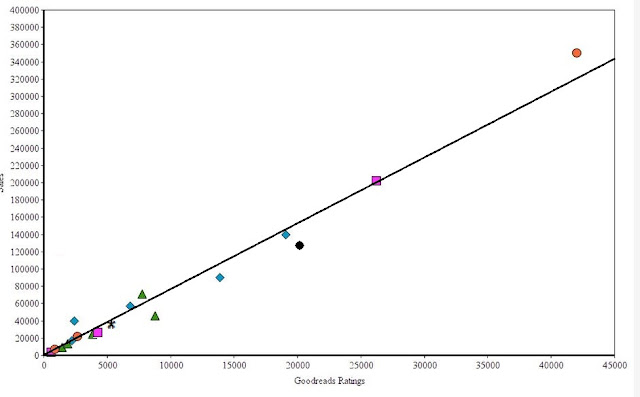 
In the 3 years since the charts above were made the population of Goodreads has doubled. 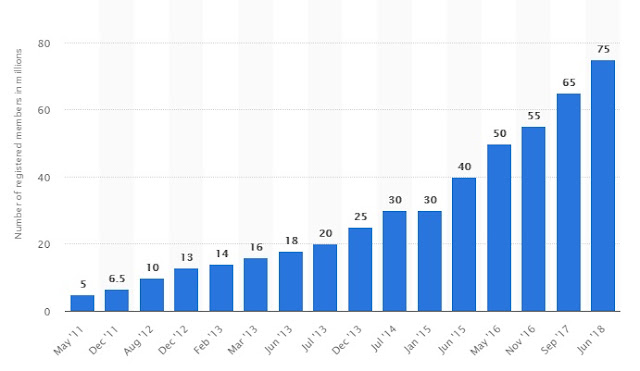 Which I would expect to impact the 7.7 ratio between number of Goodreads ratings and sales in English identified in the original post. In fact if there are twice as many members it may well be that twice the original proportion of my readers are rating my books and the ratio for new ratings might fall to around 4, bringing the overall ratio down toward 4 with the adjustment depending on how old the book is.

In the chart below I plot the US sales of each of my books in July 2018 against the number of ratings they gained in that month. 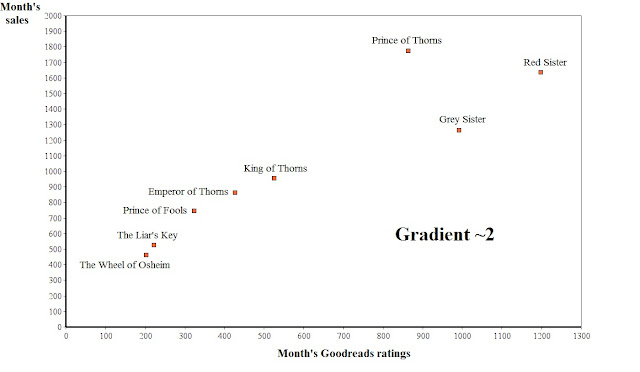 Now given that half my sales in English actually happen in the UK (+ Australia & New Zealand), that would make the ratio between Goodreads ratings and sales in English around 4 for July 2018. And I would think that ratio would be applicable to traditionally published fantasy books that have had all their ratings in the last year or so.

As Goodreads membership continues to grow the ratio will likely continue to fall, and for books released in the last ten years the ratio will vary depending on age, from around 8 to (currently) around 4, being lower depending on how many of those ratings were recently acquired.

Anecdotally, the ratio for self published books seem to range from the same as traditionally published books to 4 or 5 times higher. This may be because they sell to a different demographic (through kindle unlimited and other marketing channels), or have (typically) smaller numbers of ratings (leading to larger statistical variation), or sell very cheaply (where the book is more likely to be bought but not read).