This follows on from a forum discussion about my upcoming book Red Sister.

Someone picked up on a line in the publisher's release about the book deal (not a line I wrote).

In a bold move, RED SISTER features Mark’s first ever female protagonist, Nona; a girl with a mysterious past and a dangerous future.

What, they asked, was bold about having a female protagonist?

Well ... from my perspective, nothing. Perhaps if I thought that the readership I've built across my first six books on the back of two male protagonists lacked the ... flexibility ... to try a book with a female protagonist then it might be considered bold to abandon them and try to build a new readership. But I don't believe that's true. 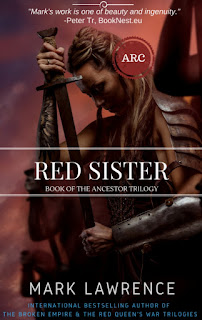 So, hit me. A non-YA fantasy book with a single point-of-view character, who is female. To make it harder, let's rule out urban fantasy and paranormal romance. Focus on epic fantasy and its closest cousins.

I'm sure there must be many and the "bold" is still a strange choice of words. But I don't recall reading one. Expand my horizons. More points for a famous example.

Here's a list. Let me know if there are errors. It's easy to forget a PoV

Kushiel's Dart, by Jacqueline Carey
Paladin of Souls, by Lois McMaster Bujold
Spiritwalker trilogy, by Kate Elliott
A Natural History of Dragons, by Marie Brennan
The Hundred Thousand Kingdoms, by N.K. Jemisin
Ash, by Mary Gentle
Son of Avonar, by Carol Berg
(many more suggested in comments below so, yeah, not that bold!).


I am finding many of the suggestions are people remembering that the MAIN protagonist was female but on closer inspection it turns out that there were male PoV characters in the book...

EDIT: In other news, this blog post has been accused of coming across as a male saviour and acting as if I'm doing something new and fresh with a female PoV and also rubbing people the wrong way in the tweet linking it ... by quoting "in a bold move" from the line I take to task.

Based on the actual content of the post I find myself astonished. It was my intention to bring attention to books from an entirely female PoV in the area in which I write. I thought this would be a good thing to do. If it has offended people I can only apologize, while at the same time struggling to understand how.