Anatomy of a burglary - a four-act play.

This isn't really anything to do with writing, other than that it has largely stopped me doing any for three days.

But it is to do with me and mine, so I may as well put it on the blog since much to my amazement it has been in newspapers, first local then national, on several radio stations, and also both major TV channels.

On Monday morning I got up and got Celyn ready for school. I wheeled her out of her downstairs bedroom and was struck by how remarkably cold the house was.

I got her medicines ready and gave them to her along with her milk through a tube that goes through her stomach wall into her stomach. Celyn is, as you will have gathered by now, severely physically disabled. 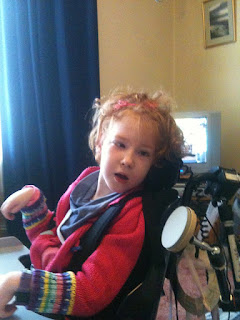 She can't use her limbs, talk, or eat. She has a number of other issues that would be headlines for most other children, but those are our headlines. Her enforced silence is perhaps the saddest of those as she has a lively brain, is curious, fond of stories, and has a good sense of humour.

As I wheeled her from the kitchen I noticed that the house was in a mess, even more of a mess than one might expect with just me and my grown sons at home. My wife had only left to visit our eldest daughter the day before.

Drawers were open, papers scattered, my coat on the floor, pockets turned inside out. The back door was open, hence the bitter cold.

Even then I thought maybe a son had been searching for something ... left the door open? In my defence I was still half asleep and I've lived 50 years without having been burgled. It wasn't what I was expecting.

The truth though began to dawn. Still, I needed to get Celyn ready for the car that was coming to take her to school. I could assess the damage later. I didn't want to upset her and her eyesight is poor so she didn't notice the chaos. 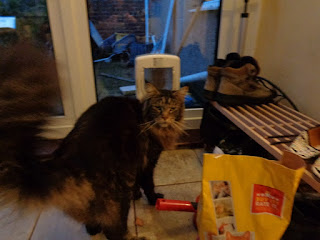 Wobble at the scene of the crime. The cat flap was used to access the door beside it.
Note: fingerprint dust is also used to look for shoe-prints and being semi-toxic must be cleaned up before stupid cats lick it.

I went into the living room where two very obvious piece of disabled seating sit beneath a ceiling hoist. I was expecting to get Celyn's suction pump, which is used to clear her airways when she chokes or vomits, and her communication device ready to send with her in the car.

Both were missing. The thief had left the iPad that the school provides to let us know what Celyn has done in school. He had the presence of mind to identify it and know that Apple products can be tracked. So it wasn't that he wasn't thinking. He saw equipment clearly important for a disabled child ... and took them on the off chance he could make a few notes from them.

After I had sent Celyn off I checked the rest of the house. Two laptops (one ancient and one bought the week before to replace it) had gone, a chrome book, the contents of a charity box, and who knows what else ... I don't remember everything in my drawers. Did he take the paperwork needed for identity theft ... who knows.

The shitbag had gone through the house after 2.30 AM when my eldest boy went to bed, and before 6:30 AM when I got Celyn up. He must have looked in on her while she slept in her hospital bed connected to a heart rate and oxygen monitor and a machine for supplying her with extra oxygen as she sleeps ... then stolen her stuff.

The eyegaze communication device Celyn has is her voice and she had been learning to use it over the past couple of years. It's specialist equipment and the software on it has been built up over time to meet her needs. It costs around £8000 (which since our BREXIT vote is about the same number of dollars).

So, I called the police, then vented on Twitter.

I discovered what it must be like to be someone famous on Twitter. There was no way I could see, let alone acknowledge, even a small fraction of the replies.

I had no idea that the tweet would spread beyond the more observant portion of my own followers. The viral tweet brought press interest and although I hate speaking on the phone I fielded 50+ calls, spoke on radio and TV, all in the simple hope that the eyegaze machine, having no resale value, would be dumped, and the more people in the area who knew the story the bigger the chance it would be recognised and returned to us. 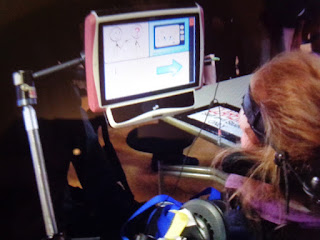 The eyegaze machine has a bar at the bottom that detects where Celyn looks on the screen. If she stares at a word or symbol for long enough it activates and the word is spoken for her, or she is taken to another screen where the type of words she wants are located. With the machine Celyn is learning to ask questions, tell us about problems or pain, share her thoughts ... the things we all take for granted.

The state is not very good about providing this equipment. If you injured your throat and couldn't speak the NHS would undertake an expensive operation to restore your speech. For children who cannot speak to start with ... funds are more jealously guarded.

The stolen eyegaze was on loan from Celyn's school but we are liable for it while it is at home, and we are in the process of buying her her own since she hasn't shown herself as capable with it as the authorities require her to be in order to fund it.

I rang the insurance company and they told me that when we moved house recently and I moved our insurance across somehow the eyegaze had ceased to be listed as a noted valuable item and was therefore subject to a £1000 limit.

I was under-impressed and asked them to find the phone call where this moving of insurance had happened.

The police (Avon & Somerset) turned out to be magnificent throughout. An hour after I called the incident in a police officer came to the house and took all the details. It was at this point my eldest son drifted by wanting a cigarette and noted that thief had also taken his tobacco ... a fact that got noted in all the press reports much to my non-smoking annoyance.

An hour or so after the police officer's visit a Crime Scenes Investigator arrived to do forensics, looking for fingerprints on some wine bottles that had been moved and in other likely spots. I got fingerprinted so that my prints could be removed from consideration. A first for me. Protip, use sugar and washing-up liquid to remove fingerprinting ink,

Although in my viral tweet I had neither asked for help or mentioned the surprising value of the equipment stolen, and at no point subsequently did I ever ask for financial help, I very soon found myself showered with generous offers to fundraise for a replacement.

I made this tweet about donating to charity instead. As soon as any Gofundme pages etc were brought to my attention I thanked the organizers effusively and asked that they give any money collected to the Sequal Trust, a charity that provides communication equipment to disabled children and adults unable to fund the devices themselves.

I made an angry tweet shortly after being burgled and aimed at friends and followers. It was never about fundraising. Though it did become about raising public awareness so that if the equipment was dumped it might get back to us.

The incident obviously struck a nerve and many good people were keen to put some points back in humanity's plus column. It was a wonderful reaction and quickly restored my faith in mankind. It was also a sensible reaction as many parents of disabled children have to give up work to care for their kids and find themselves in dire financial straits, especially when it comes to funding equipment.

You might think that equipment is provided for free in the UK. The truth is that much of it is, and the NHS have a lot to be proud of. But there are areas where provision is less good. Access to power-chairs and communication devices is complicated and there is a hurdle to overcome. To get the equipment you have to demonstrate you can use it ... but that takes practice, and how do you practice without the equipment, and how good do you have to be? ... it gets complicated.

Anyway, day 2 is when the TV crews come.

While they were filming the call came in that an arrest had been made. It seemed likely that the publicity had helped in bringing the suspect to light.

I have been told a lot of interesting things about the arrest but sadly I can't share any of the information without risking prejudicing possible future prosecution.

Celyn greatly enjoyed the TV interest. By the fifth take of the second visit she was giggling her head off as the presenter fluffed lines, failing to look the distraught child robbed of her voice.

Celyn had a bad day. She may well have been missing her voice. We couldn't really ask her. Her voice had been stolen. Celyn can't nod or shake her head.

We had good news though. Celyn's eyegaze machine had been found in a public bin and handed in to police. Another case of the publicity helping?

We couldn't celebrate just then though - a street bin on a day when it rained almost non stop? The laptop I'm typing on doesn't have a working "p",":","0", or ")" because a year ago I spilled a very small amount of water on it. Would the eyegaze still work when we got it back?

The police needed to conduct forensic tests on it before we could have it returned but promised to get it to us the next day.

Late this afternoon a detective from the Avon and Somerset police brought the eyegaze machine to our house, AND the suction machine which had been found by a member of the public in a nearby park...

So, Celyn has her voice back, all her equipment has been returned, and the police and public have together done a remarkable thing!

Also, the Sequal Trust charity should be getting over £6,000 from a JustGiving and a GoFundMe page along with many other promised donations.

And after all that the insurers said they would cover the eyegaze ... possibly another win for the publicity, though of course we will only now be claiming for the things that remain lost.

It has been a traumatic experience but also uplifting in a variety of ways, showing the worst of one person and the best of a great many others.

We will be improving our security and moving on.

A huge thanks to all. 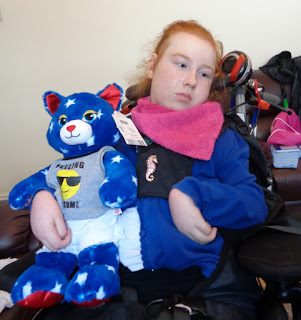