Writing on the numerical knife edge

I've long held the conviction that the difference between success and failure at the top of any game is a matter of tiny fractions of... something. The man who comes 20th in the Olympic 100m is still stupidly fast. The 300th best basketball player is incredibly good at what they do. And yet Mr 20th and Mr 300th earn a tiny fraction of what the Usain Bolts and Magic Johnsons do and very few people know their name.

J.K Rowling sold a million bazillion books. A.N Other sold a thousand... and yet give books by both authors to a collection of people who have never heard of either and A.N Other is the prefered writer 45 times out of a hundred...

How does that work?

I have a dirty secret... under my glossy writer exterior... I'm a physicist.

And every now and again my science side escapes and stomps over some corner of the writing lawn with its science boots on.

Today it wants to tell you about how the business of success is a highly nonlinear affair. The mathematician in me could waffle on about feedback loops and reinforcement but the physicist likes to keep it simple (believe it or not, simplicity is the goal of all physicists).

I'm going to use the science of spherical cows which is explained in this joke: 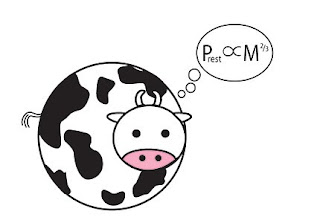 There was a farmer that was having trouble with a cow that didn't produce good milk. The farmer decided that he'd hire three experts to figure out what was wrong with the cow. He hired and psychiatrist, engineer and a physicist, and gives them each a day with the cow.

After the first day, the psychiatrist comes to the farmer and explains that the cow is not happy inside the barn, and that the inside of the barn should be painted green, so that the cow will feel more at home.

The farmer isn't sure so he asks the engineer to give it a try.
After the second day the engineer comes to the farmer and tells him that the cow isn't being milked efficently, and gives him draftings of a very efficent milking machine.

Still not convinced, the farmer asks the physicist.
After a day of study the physicist goes to see the farmer. The physicist walks to a chalkboard and draws a big circle and says "Imagine the cow is a sphere..."

So in short, I'm going to make a ridiculously simple model that I hope captures some essential elements.

Let's take two authors who each start with 100 readers (random pick-ups due to launch day publicity say). Now let's say from that point on new readers are gained by old readers convincing people to read the book.

Let's say that each reader convinces r new people to read the book and that they do so in the week after reading it themselves.

Let's say Maz's readers each convince, on average, 0.95 people to read the book, and that Mark's readers each convince 1.05. These authors appear to have written books of pretty similar saleability. One is not great and the other bad. They are both good, and the difference between their ability to inspire their readers to recommend them is fractional. It's shown below as height. 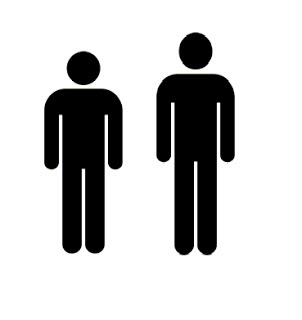 Let's work out their sales after 18 months.

Here's that difference shown as height...

So, yes, cows aren't spherical (though they can be rolled), but the fact remains that the difference between selling 10 books, 10,000 books, 10,000,000 books comes down to fractions. The work of many brilliant writers goes virtually unnoticed while we build temples of worship to others whose tales have just that fraction more ability to move us.


And the bottom line?

It's down to you.