We don't need another hero?


Actually I’ve nothing against heroes. I’m happy to read fantasy books with a cool heroes putting down the smack on the bad guys. I grew up on that stuff. Obviously I want it well written, with intelligence and passion, but if it can be boiled down to ‘good guy smacks bad guy’, no problem.

However – let’s be clear about this. Fantasy is defined by being free and open. It contains elements of the fantastic. The imagination of both author and reader is unbound. That’s fantasy. There’s nothing on the box that says ‘hero required’.

I read a lot of non-fantasy books.  Actually, that’s a lie – I get very little time to read these days. In the past I have read a lot of non-fantasy books. Books that are about people rather than heroes. Books that have protagonists. The main characters in the catch-all that is ‘literary fiction’ are often just ordinary people going through the struggle of their lives, and we get caught up in their stories, hooked by the same fascination that attracts so many people to soap operas, combined with the beauty of the writing, and the deeper observations that the author is attempting to make, the deeper truths they try to approach.

Although fantasy can be as broad as literary fiction, but with the added goodness of being able to step outside any boundary reality imposes... actually it's a much more limited genre in many respects, straitjacketed by expectation.

Call this a hero? I can’t get behind a hero who does XXXX or YYYY. What were you thinking, Lawrence?

This author desperately wants me to like Jorg and approve of his actions. I however am built of finer stuff and my moral fiber will not allow me to support such a character.

Some are less reactionary and simply file Jorg under ‘antihero’.

However, I don’t think Jorg is a hero, anti-hero, or villain. He is, for want of a better description, a person. I didn’t set out to make the reader like him and I certainly don’t expect the reader to approve of his actions. My only goal was that the story about him be interesting and make the reader care.

Traditional anti-heroes in my experience fall into two categories. There are the every-man types, ill-suited to the heroic roles thrust upon them – Frodo would fall into this group. And there are the pragmatic, sly, or cowardly ones, often saved from the reader’s dislike by their charisma and wit, or by the comedic value of their failures, perhaps we might cite Vance's Cugel the Clever or GRRM's Tyrion here. 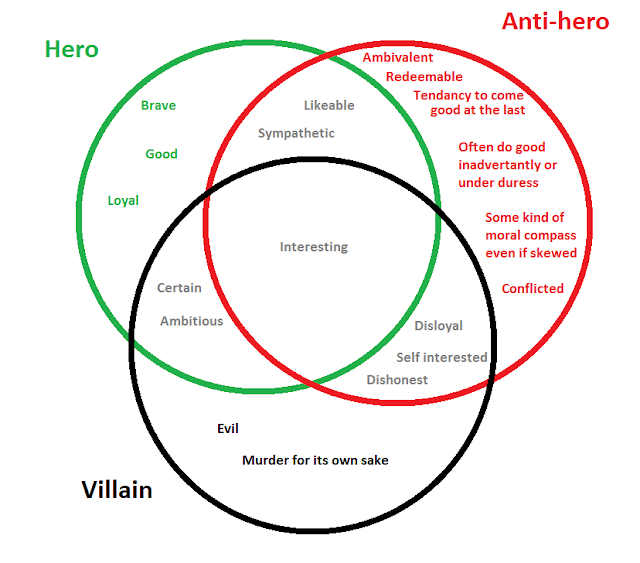 I think Jorg could be described as all of them. What Jorg certainly is not is ordinary. He’s a prodigy, extremely intelligent and creative, old beyond his years, charming, a very skilled swordsman. Yes he has failings – anger control issues, a lack of scruples, a poor singing voice, an inability to compromise, lack of empathy, but he is in the traditional fantasy vein, someone extraordinary.

In my next book the main protagonist fits the anti-hero mold more closely, swapping a measure of angst for less conflicted greed, and replacing skill with bluster. He’s a man out of control of his destiny, whose goals are small and decadent ones that he tries to snatch at as the world sweeps him along.

I don’t feel however that the character is less original. The ability to fit a character into a broad category doesn’t by necessity rob the reader of any enjoyment. They say the devil is in the detail. But then again, so is all the good stuff. I’ll do my best to get that right and hope you enjoy where it takes us!